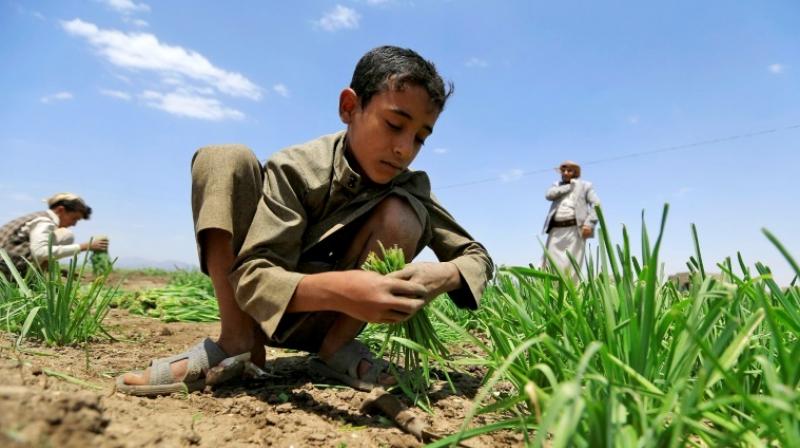 Around two-thirds of those facing severe food shortages live in war-torn countries like Yemen. (Photo: AFP)

Yemen, the Democratic Republic of Congo, Afghanistan and Syria were among the eight nations accounting for two-thirds of the total number of people worldwide exposed to the risk of famine, the Food and Agriculture Organization (FAO) said in its 2019 global report on food crises.

Conflict and insecurity remained key factors, along with economic turbulence and climate-related shocks like drought and floods, the report found. In countries on the verge of famine, "up to 80 per cent of the population depend on agriculture. They need both emergency humanitarian aid for food and measures to help boost agriculture," Bourgeon said.

The report highlighted the strain put on countries hosting large numbers of refugees, including neighbouring nations of war-torn Syria as well as Bangladesh, which has received more than a million Rohingya Muslims from Myanmar.

The FAO said it also expected the number of displaced people to increase "if the political and economic crisis persists in Venezuela" which is likely to declare a food emergency this year. Bourgeon said he was concerned by the "important and significative rise" in poverty in Venezuela, as it grapples with dire economic and living conditions worsened by an ongoing political crisis.

Globally, the study noted that the overall situation slightly improved in 2018 compared to 2017 when 124 million people suffered acute hunger. The drop can partially be attributed to the fact that some countries in Latin America and the Asia Pacific region for instance were less affected by weather disasters that had struck in previous years.

However, the FAO warned that the year-on-year trend of more than 100 million people facing famine was unlikely to change in the face of continued crises. Afghanistan, Iraq and Syria all suffered bad droughts in 2018, which severely impacted agricultural output. The FAO also stressed that "high levels of acute and chronic malnutrition in children living in emergency conditions remained of grave concern".