Satanic rapes: Each is a demonic crime, it’s not religious!

At this point, for a second, abuse of Muslim women during the phase of Gujarat carnage may be considered. 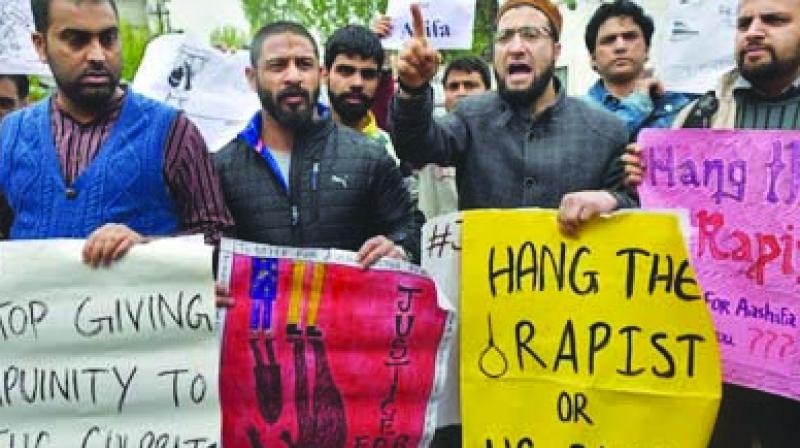 What an audacity to try and “justify” rape by describing it as “religious”. Not too long ago, controversy was raised over defining forcible physical relations with wife as criminal. Now attempts are being made to “justify” forced sexual abuse of minor girls as appropriate in the name of religion and/or a means to target weaker sections. So would pronouncing death penalty for those indulging in such crimes play a major part in checking these crimes? Think again. Yes, within a few days of issuance of this ordinance, there have been reports of equally heinous rape-crimes, including that of an infant. Numerically, these reported incidents may probably be a minor indicator of similar crimes actually taking place. Not much needs to be said about acute “social stigma” still attached with those who have been raped and abused for no fault of theirs. The same “stigma” bears little relevance for criminals behind these activities. If they dread anything, it is the thought of being caught and pushed behind bars.

The heinous nature of their crimes is apparently notreally considered “heinous” by them. Why? What does this suggest?It is difficult to even accept the kind of mentality these criminals have when they bear no humane concern for even tiny infants tortured by them. Of course, the issue of humane concern bears relevance whatsoever is the age of victims, but when it comes to totally helpless victims, one is forced to deliberate on possible factors responsible for criminals’ attitude having reached this stage? Clearly, till attempt is made to understand the root cause responsible for some people’s consciousness and mentality being of this deplorable stage, punishment of any kind may not succeed in checking continuance rapes of various kinds.

The tragedy is that criminals responsible for these crimes have indulged in these without considering the same as odious and deplorable. Describe it as their “lust”, craving for what seems easily within their reach or whatever, their barbaric attitude considering women as “coodities” needs to be given more importance. Use, abuse, dispose and/or discard them, as they — the criminals seem aropriate.

Greater importance needs to be given to changing this mindset. It is not simply the question of propagating equality of women. This stage shall remain mirage-like till their stature is actually viewed as significant and not discriminated against. Women, whatever be their social identity, don’t seem to be considered as human beings by whosoever chooses to target them. This partly explains as to why in some instances they haven’t been spared by those known to be them, including their family friends and relatives — even fathers as a recent case indicated. Leave aside humane, even familial ties are disregarded in these cases.

This is simply an indicator of the extremely negative, virtually downgrading, psychological approach held by criminals towards their victims, looked down upon to be targeted. What else can be indicated by recent cases of females being gangraped with no concern for the physical, social and psychological trauma being undergone by the latter, whether lifeless or virtually dead? It is disgustingly horrifying, not just the action but the psychological mentality behind it urging the criminal and his associates to go on and on. This attitude needs serious attention and correction.

Here one needs to draw a clear-cut line on whether victims’ social identity plays any role in deciding criminals’ psychological approach towards their victims. Undeniably, an impression has been created that in certain cases religion, caste, class or some other social identity of the targeted victim decides the criminals’ move to display their horrendous actions. If social identity remained the key decisive factor, criminals may not have probably let their key moves be that of raping the victims. Yes, a rape is a rape, that of the female gender. And something seems amiss about viewing these crimes through varying social lenses categorised along religious and other lines.

At this point, for a second, abuse of Muslim women during the phase of Gujarat carnage may be considered. Yes, communal bias cannot be sidelined here. But there is a difference between a series of rapes taking place around the same time as well as place and individual women/girls/infants being targeted at different places. The former is suggestive of rapes being part of other communal atrocities the targeted communities are subject to. However, in individual cases, when religious or other factors are drawn attention to, it is an attempt to “justify” rapes on ground of social identity of victims.

When criminals choose to decide on physical abuse, from molestation to gangrapes, do they really care about social identity of their victims? Now was Nirbhaya’s social identity verified prior to her being targeted? Whichever social group and/or class she belonged to probably mattered little to criminals involved in that heinous crime. Of course, if her identity was found later to be that of a Muslim, in all probability the crime would have been viewed more as a communal incident. Though in films and other stories, “manliness” of rapists is only demeaned, in real life, this stage is still a long way off. Yes, let us not be fooled by religious/casteist/communal or any other social angle accorded by some elements to their satanic rapes!