The animal welfare group has warned of legal action if rides are not stopped. 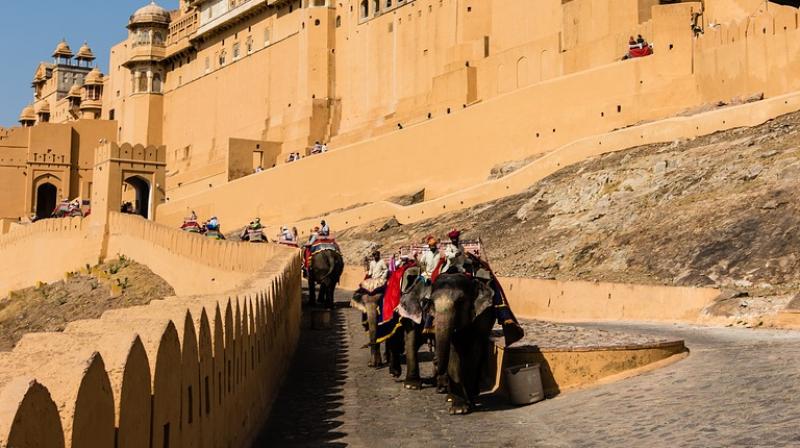 The notice comes fresh at the heels of the latest report after inspections authorised by the government’s Animal Welfare Board of India (AWBI). (Representational Image/ Pixabay)

Jaipur: People for the Ethical Treatment of Animals (PETA) India sent legal notices to Rajasthan Departnment of Archaeology and Museums as well as Forest Department asking them to stop illegal elephant rides at Amber Fort and Hathigaon.

The notice comes fresh at the heels of the latest report after inspections authorised by the government’s Animal Welfare Board of India (AWBI) which reveals the shocking abuse faced by captive elephants, which includes among others the use of blind elephants and many suffering from tuberculosis (TB) for these rides.

In response to their notice, PETA India received a letter from the Superintendent of the Department of Archaeology and Museums, who has forwarded a copy of the notice to the Chief Wildlife Warden (CWLW) of Rajasthan stating that since the department requires a health certificate from the zoo and a No Objection Certificate from the CWLW before granting permission for rides, the CWLW should determine whether the elephant rides should be permitted.

What the notice reveals

In the legal notice, PETA India pointed out that these rides are illegal because none of the elephants used are registered with the AWBI, which is in violation of the Performing Animals (Registration) Rules, 2001, framed under the Prevention of Cruelty to Animals Act, 1960, and the 2010 order of the Rajasthan government which mandates that any use of elephants requires permission from the AWBI.

Furthermore, the report reveals that the elephants at Amber Fort are being forced to carry loads heavier than 200 kilograms, which is the legal maximum for these animals on hilly terrain, as per the 2008 "Guidelines for Care and Management of Captive Elephants" issued by the central government.

The legal notice further explained that the weight of the howdah combined with the safety gear and one mahout alone weigh around 200 kilograms.

Speaking about it, PETA India Senior Legal Associate Swati Sumbly said, "It's shameful and embarrassing that sick, elderly, blind, and TB-infected elephants are being forced to haul tourists through one of India's most beautiful historic sites.”

She further added, “PETA India is calling on the Department of Archaeology & Museums and the Forest Department to stop this criminal abuse of elephants and these illegal rides immediately.”

According to the report, among the 102 working elephants examined in Jaipur, many were found to be more than 50 years old.

Ten tested positive for TB, which can be transmitted to humans, and 19 were observed to be visually impaired, rendering them unfit to give rides because of the danger posed to both themselves and the public.

All were found to be suffering from various foot problems, including overgrown toenails and bruised footpads, and many displayed stereotypical behaviour patterns, such as repetitive swaying and head-bobbing, indicating severe psychological distress. Additionally, the tusks of 47 elephants appeared to have been cut, in apparent violation of the Wildlife (Protection) Act, 1972, raising suspicion that the tusks may have entered the illegal wildlife trade.

The post-mortem reports for four elephants who died within a period of five months in 2017 indicate that most had been suffering from respiratory diseases – possibly TB – and a heavy internal parasitic load.

More than 100 travel agencies – including global operators such as TripAdvisor, The Travel Corporation, Intrepid Travel, smarTours, STA Travel, and TUI Group – have committed to not offering activities that exploit elephants.