On Gandhiji’s 150th birth anniversary, we meet another man who is on a green journey of his own as a tribute to the Mahatma. 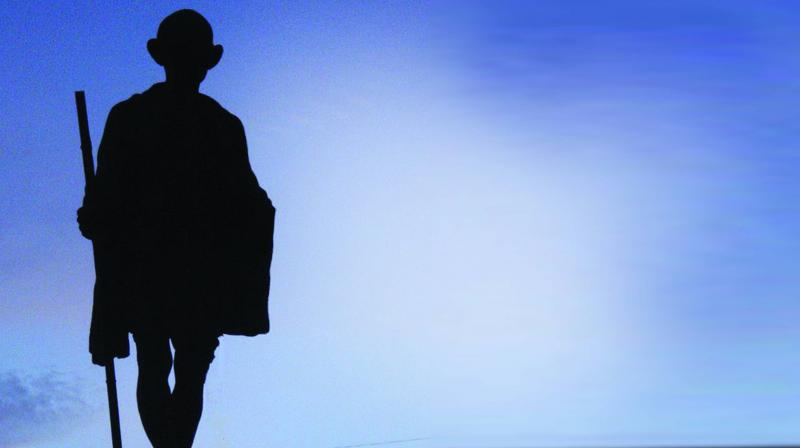 Jyani’s is a call for environmental peace in a time when climate crisis is engulfing the planet.

What is the first thing that comes to your mind when you think of Mahatma Gandhi? India’s freedom struggle? His path-breaking methods of non-violence? Ahimsa? Satyagraha? While these are the obvious answers, a professor from Rajasthan is on a mission to give unique green tribute to Gandhi and his principles.

Shyam Sunder Jyani, an associate professor and sociologist, has opted out of using run-of-the-mill ways to celebrate Gandhi Jayanti. Instead, he has initiated a massive plantation drive to follow the leader’s peaceful tracks. His is a call for environmental peace in a time when climate change crisis is engulfing the planet.

To understand Gandhi properly, one has to walk on the paths he practised and preached. So, as the country celebrates the 150th birth anniversary of the Father of the Nation, Jyani is busy encouraging and leading teachers from more than 150 villages of Rajasthan to plant saplings. His is an act of selflessness — Shyam has purchased the entire flora himself and provided irrigation tankers on his own time and expense. Teachers of 150 rural state schools of Rajasthan’s Bikaner division have become part of the unique initiative.

It is one thing to adopt a child, but to adopt a tree as a family is a concept that most have never heard of before. This concept was, however, the seed that led to the birth of familial forestry.

The initiative directly connects families with plantation and, thereby, initiates eco-civilization that allows for community-level engagement in forestry. “Trees have a central role in the environment and the domestication of trees makes families sensitive towards environmental conservation,” says Jyani.

This quest for environmental peace began in 2003 when Jyani rescued some neem trees in his college campus. “In subsequent years, it became my passion, which in turn became my mission when I formulated the idea of something called Familial Forestry in 2006. Then, I led the plantation of over 9,00,000 saplings under my direct supervision in the north-western region of Rajasthan,” shares Jyani. The professor takes out time from his day job frequently to visit villages and interact with school students to ensure active engagement in familial forestry. The result? Lakhs of students and villagers have now acquired the skill of proper plantation and post-plantation care.

But that’s not all! A social scientist by profession, Shyam has also developed a unique technique of in-situ budding on jujube, Prosopis cineraria and Cordia gharaf, which are native species of desert land. This technique transforms these bushes and trees into high-yielding varieties. “I have developed a very diverse institutional forest of five hectares in my college campus by involving students,” Jyani points out humbly.

However, his repertoire of achievements is a long one. The President of India has felicitated him with IG NSS National Award. The Limca Book of Records has acknowledged his work and the concept of familial forestry has been included in the PG syllabus of MGSU Bikaner (a state university).

According to Jyani, the arid desert conditions of Rajasthan make it is very expensive and challenging to develop large forests there. But, his walk on the path of Bapu continues as he plans to develop 150 Gandhi fruit gardens and has planted saplings of many plants like berries, lime, pomegranate, mulberry, drumstick, tamarind, and guava. He has also started organising ‘Green Dialogues’ in prayer sessions every Saturday in all schools with the prime objective of mobilising environmental socialisation of students. After all, it was Gandhi ji who had cautioned the world that the Earth has enough to satisfy everyone’s need, but not greed.