Now that free bus transport for women is a reality in the city, we look at how passengers across the board feel about the new scheme. 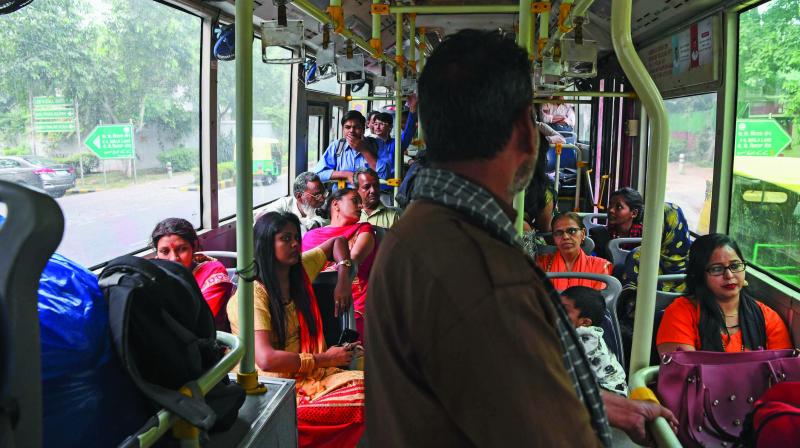 Housed in a special pink ticket with a reimbursable fare, a free bus ride for a woman in Delhi opens up many doors for them. (Photo: AFP)

“All women are now VIPs,” CM Arvind Kejriwal announced in a tweet on October 30, as the capital woke up to free bus transport for women on Tuesday. In August earlier this year, the CM had announced his plan to make rides on DTC and cluster buses free for women. In a festive Bhai Dooj symbol, the Delhi Government began this programme for 3,700 DTC buses and 1,800 other buses across the city.

Housed in a special pink ticket with a reimbursable fare, a free bus ride for a woman in Delhi opens up many doors for them. For daily commuters, a waiver of even a Rs 50 ticket everyday can mean saving up to Rs 18,000 every year. Not only will this ease their finances, but it will encourage more women to take the bus — a dire call in the face of the excess pollution caused by private vehicles. Moreover, many women who are dependent on their husbands financially find their independence curbed by their allowance. Kejriwal reached out to the women of the capital in a small message at the back of the ticket that reads “I want great prosperity for you and your family. When women progress, the country progresses.”

While this move comes as a boon for women to take the bus everyday, one beckons to ask: how affective is a free-ticket move when buses as a mode of transport fail to reach a significant chunk of the population? Malti, who uses the bus with her daughter for short distances, expresses a general indifference about the move: “It is a good move, but because the buses aren’t very well connected, it becomes inconvenient for me to use them anyway.” This opinion isn’t limited to a financial demographic. Manju Devi, who runs a tea  stall near the ITO station, finds that the free buses are of little help to her. “The timings of the buses don’t suit me. They are infrequent, and I don’t like to wait for too long. Free or not free, it doesn’t make a difference to me.”

This way, while free bus transport is definitely a move in the right direction, it seems to lose its weight when many passengers struggle with bus connectivity in the city.