Proposing a great solution to this, in 2019, a herd of 100 life-size lantana elephants will enter cities across the globe. 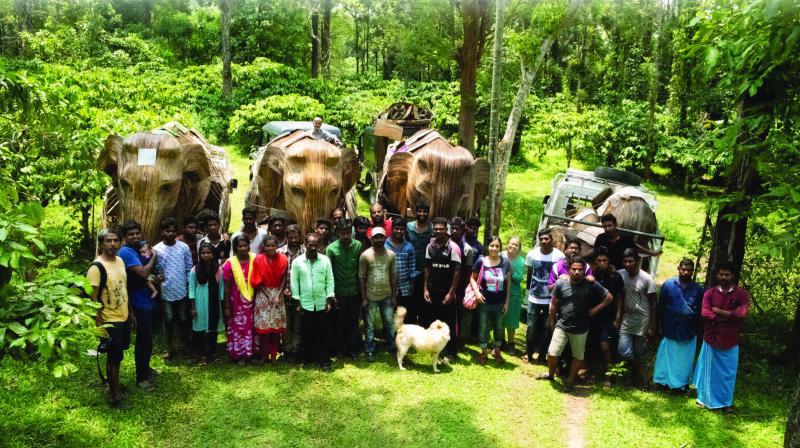 Sculptors next to elephant statues made of Lantana weed

A hundred life-size models of elephants will be exhibited across the world as part of a project to highlight the importance of human-elephant coexistence.

Elephant-human conflict poses a grave threat to their continued existence.  In Asia, most areas that form elephant habitat are close to human settlements.  Though this coexisting is vital, conflicts take place often as local people come across jumbos that migrate or forage.

Proposing a great solution to this, in 2019, a herd of 100 life-size lantana elephants will enter cities across the globe. They will exhort us to live in harmony with all other life forms on earth, citing examples of wild elephants and humans coexisting peacefully. The project has another objective as well — clearing the harmful lantana weed from the forests of South India and providing 70 indigenous artisans with a livelihood.

The project ‘Coexistence’, launched in collaboration with the Shola Trust, the Elephant Family (a UK-based NGO for conservation of Asian elephants), and the Elephant Collective, proposes ideas to save the natural habitat of wild elephants.

Tarsh Thekaekara of the Shola Trust, and his energetic and committed colleagues in the project representing the Elephant Family and the Elephant Collective, say the primary objective of the global tour and the exhibition of real-life replicas of elephants is to ‘change the way nature conservation is thought of — from saving tiny patches of forests to living well with all animals around us.’

“The Elephant Family has done pioneering work on innovative fundraising models with large scale exhibitions. And we at the Shola Trust have been working with tribal people to make lantana furniture for 10 years, and we thought elephant would be a great step up from that. So this project — to make 100 life-size elephant models out of lantana to travel around the world — came from that,” says Tarsh.  .

He shares that one of the objectives of the exhibition around the world is to make the people aware of the importance of elephant conservation.“Overall, the focus of the project is on urging all people, including policymakers, not to think about conservation in just small pockets of forests, but to look at nature everywhere.  Specifically in terms of wild elephants and people, there are a large number of interactions happening on a daily basis, and the vast majority happens very peacefully and a small number is negative. The focus has to shift to taking landscape approaches, and not looking at small protected areas alone.”

The project, an initiative primarily by the Elephant Family and the Real Elephant Collective (A Kochi-based social enterprise aimed at conducting events and selling elephant-related ethical products with a clean value chain), will kick off in Kochi. The Shola Trust helps in research inputs around lantana and elephants. A range of other NGOs/experts will help in governing the funds and deciding on the priority areas for Asian elephant conservation.

Apart from the elephant and its habitat conservation, clearing the forests of lantana, which is a harmful weed, is also part of the project. Lantana is an invasive weed and the toxins in its leaves make it inedible for all herbivores, and its ‘allelopathic properties’ mean it puts out chemicals that suppress the growth of all other plants, particularly grasses which are vital for wild animals. The lantana elephants will bring awareness on clearing the harmful lantana weeds, which are used to make them.

Tarsh says poaching is not the biggest threat to wildlife in India. “India is actually a highly tolerant country, where elephants are never killed even if they kill 10 people. Anywhere else in the world, wild animals are killed for just harming livestock or posing a threat to humans. So, overall I don't believe poaching is a big threat; the challenge in India is to manage the human-wildlife interface in areas where they share space to minimise the negative impact they have on each other.”

Tarsh says that the project builds on the work and ideas of many people and he is just one. One among them is Ruth Ganesh of the Elephant Family who has pioneered large and expansive fundraisers for elephants. Shubhra Nayar is the one who takes photos of elephants, makes drawings and converts them into structural drawing and then to amazing life like sculptures.

Tariq Thekaekara is the one who has been overseeing the design and the small details like the eyes, toenails etc. that give them life and Subhash Gautam manages the production and the whole team of 70 artisans on a daily basis.

Lantana elephants will be installed for public exhibitions and events throughout 2019 in Kochi, Bengaluru and Delhi, and then the UK (Victoria and Albert Museum and Royal Parks in London) in 2020.

In 2021, they will travel across the USA from east to west on flat bed trucks, stopping at iconic locations along the way.