At the trailer launch of his upcoming film, the actor talks about playing a cop, his take on multi-starrers and his association with Ajay Devgn. 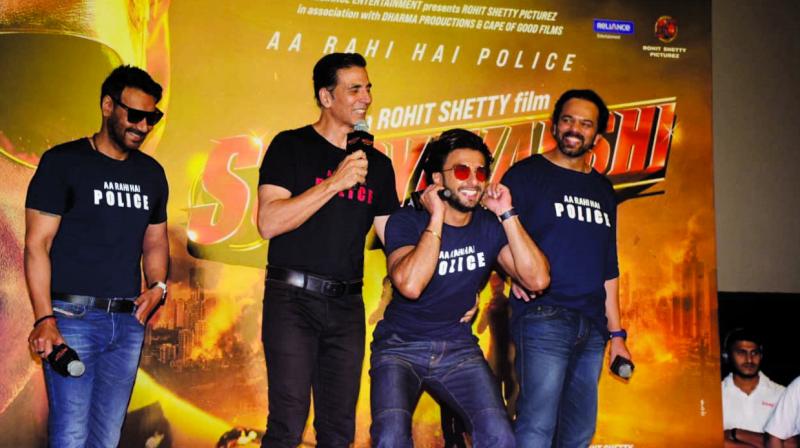 Everyone knows that Akshay Kumar takes ‘time’ very seriously and is famous for his punctuality. Little wonder then, that the actor didn’t rely on Mumbai roads to spoil his record. For the trailer launch of his highly anticipated film Sooryavanshi, the actor ditched his luxurious car ride to hop on a bike in order to reach the venue on time. Akshay even posted a picture on his social media handles of his successful ride with “Veer Sooryavanshi ditched the helicopter for a bike to beat the Mumbai traffic for the #SooryavanshiTrailer launch.”

The film will see three super cops coming together to fight for the right. It will also have Akshay and Ajay Devgn coming together on screen after a long time. “Ajay and I started our careers together and we have reached here, where we have done so many films together,” said Akshay at the trailer launch.

Sooryavanshi also stars Ranveer Singh who will reprise his Simmba. “During Simmba, there was a combined scene of Ajay and me. It was a huge moment for me. When I checked that scene in the monitor, Rohit sir knew I was having a moment. Today, I am starring with Akshay sir, and I feel incredibly blessed,” said Ranveer.

Rohit Shetty, who has been associated with cop films for a long time, reveals that they consulted real-life cops police officers for the film. “This franchise has become about cops, so we don't have to say anything. We just have to tell them we want to shoot and they readily give us permissions,” he laughs.

Akshay added that he also enjoyed wearing the police uniform for the film. “It feels good when I get an opportunity to wear a police uniform. Uniform always has a lot of dignity. And I consider myself lucky. We all are lucky to get opportunities where we play such great roles.”

When asked why there are fewer multi-starrers nowadays, Akshay quipped, “We both (Ajay and him) have always worked in multi-starrers. This should be asked to Ranveer Singh, who is new.” To this Ranveer said, “I have done multi-hero projects since the beginning of my career, with Gunday, Dil Dhadkane Do, and now I am doing Takht with Vicky (Kaushal). I am not the right person for this.”

A message of unity

Ajay and Akshay also took the opportunity to address their fan clubs, who fight it out on social media. The former started the conversation at the event, saying, “We want to say something to our fan clubs. Lately, we have seen that our fans keep fighting amongst each other. We want to request them do not fight. Please do not fight, we are with each other and will continue to support each other.” Akshay also added,“We want to request them to not fight among themselves. All our fan clubs should stay together as both of us are together.”