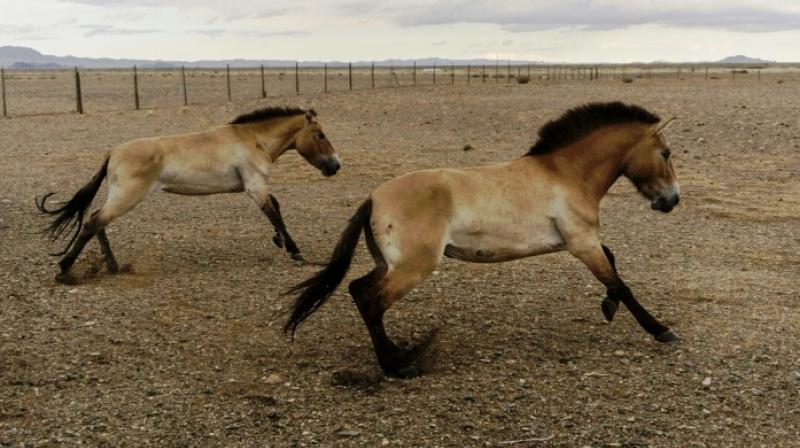 Horse domestication is central to human history, and in 2019, we still don't understand where it started. (Photo: AFP)

Washington: The horses that galloped the earth just a thousand years ago probably looked very different from their modern descendants, researchers said Thursday after compiling the most complete genetic history of any non-human species.

But the biggest surprise of the vast study, which involved an international team of 121 scientists and was published Thursday in the journal Cell, was the staggering loss of genetic diversity in the past 200 to 300 years that accompanied modern breeding practices.

The horse was one of the last animals that were domesticated by humans, long after dogs, cattle and pigs. But around 5,500 years ago, people began to ride, milk and lock horses in pens, and things would never be the same between the two species.

"The horse has had a profound effect on human history," said Ludovic Orlando, a research director with CNRS and the University of Toulouse, who coordinated the study.

Thanks to the horse, "we were able to go faster, further, and to conquer new territories. We went to war differently. We were able to plough fields and do agriculture," he said.

"The horse of Alexander the Great was so remarkable that we know his name, Bucephalus." But scientists still don't know the answer to a key question: what was the ancestor of the current domestic horse?

To this end, the team analysed the genomes of 278 specimens (mostly horses but also donkeys and mules discovered inadvertently), mostly from the past 5,000 years, across Europe and Asia. "This is the largest register of ancient genomes ever collected for a non-human species," said Orlando.

Ancient genetics research saw a major technological leap in 2010 that allowed the team, working in a Toulouse laboratory, to extract and analyse DNA from bones that were not accessible before.

This led to a number of surprising discoveries: for one, an ancient line of horses were present in Iberia until at least 4,000 years ago, before mysteriously disappearing completely.

On the other end of the Eurasian landmass, another lineage of horses roaming Siberia also completely disappeared around the third millennium BCE. "They are a sort of horse equivalent of what Neanderthals are to modern humans," Orlando said.

Today there remain but two lineages: the domestic horse and Przewalski's horse, also called the Mongolian wild horse. They most likely originated in Central Asia, but this is only a hypothesis: to date, no genetic ancestor has been found.

Scientists say they are struck by the speed with which the genetic diversity of horses collapsed in the last two to three centuries, after remaining constant for the previous 4,000 years of domestication. The 16th and 17th centuries saw the emergence of the concept of "pure" breeds.

"All the current breeds, from the Shetland pony to the Thoroughbred, were made then," said Orlando, with traits such as speed over short distances probably favoured.

Another major shift occurred between the 7th and 9th centuries, during the Arab-Muslim expansion. The invaders brought with them an oriental horse, descended from the Persian empire of the Sassanids.

A more elegant animal with a finer silhouette, this horse mixed with those that were predominant in Europe at the time, while their ancestors, those mounted by the Romans and Gauls, are today confined to two regions: Iceland and the British Isles, where they were taken by the Vikings.

"Horse domestication is central to human history, and in 2019, we still don't understand where it started. That's mind-blowing."