An enormous fuss is being made that ‘Pranab Da’ has chosen to attend and preside over the function. 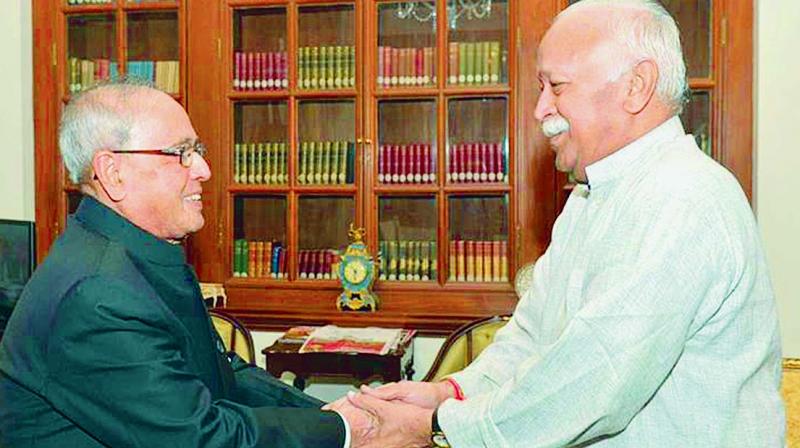 An enormous fuss is being made that ‘Pranab Da’ has chosen to attend and preside over the function.

Pranab Mukherjee was one of India’s most distinctive head of state. He set an impeccable bipartisan record as a politician who transformed into a statesman-like President. It shows his breadth of vision and his understanding of inclusivity if he has accepted an invitation to address the RSS, the far right voluntary organisation that is the ideological arm of the ruling BJP and the chief propagandist and promoter of Hindutva thought.

An enormous fuss is being made that ‘Pranab Da’ has chosen to attend and preside over the function.  It has been pointed out that leading luminaries have visited the RSS in the past although few would endorse its most recent forays into dividing the polity after its political wing was voted into office four years ago.

It might just seem fair that his much anticipated speech be heard before ‘Pranab Da’ is judged, either by members of his old political party, the Congress or the people in general and Twitterati in particular.  As President, Pranab had held fast to his secular outlook and he is unlikely to change. To address the RSS might be a delicate task for him but he is capable of statesmanship as much as he is of speaking his mind. It is an interesting event at which he will be speaking this week and his words will be weighed even as he speaks them.

Ipsit Pallav@Ipsit_Pallav
It is so ironical of the so called liberal intellectuals criticising Pranab Da just because he chose the invitation to address the RSS cadres.Their rhetorics and the language towards a fmr Indian President is extremely shameful. #PranabForRSS

Totlani Krishan@kktotlani
#PranabForRSS After becoming President Pranab Da is now well above the politics & if he accepts to address the cadre of RSS, i don't see any reason why Congress party should oppose it ?

#GauravPradhan  @DrGPradhan
When Manmohan Singh and Hamid Ansari attend and promote book launch of Ex ISI chief .... It is tolerance
When Pranab Da attend RSS event it is intolerance
Still some HINDUS think @RahulGandhi can be PM of India

Advaita Kala @AdvaitaKala
Unnecessary outrage over former President and Congress stalwart Dr Pranab Mukerjee accepting RSS invitation. After all none other than Pt Nehru invited RSS to participate in the Republic Day Parade

Hardik Aatekar  @Hardik_Aatekar
Mani Aiyyer of congress can sit in Pakistan but Pranab Mukherjee cannot accept RSS invite. What an hypocrisy by Congress and pseudo Liberals

Deepak Kher@deeepakkher
#PranabForRSS #PranabWithRSS #PranabAtRSSEvent Whats the big deal if Pranab Mukherjee has consented to be the Chief Guest at a #RSS function? He can elaborate his views at that event & in fact tell the graduating class a few home truths as he sees them. Why is #Congress worried?

Girish Alva @girishalva
"What a shocker to Dynasty" RSS, a volunteer org, portrayed as a terrorist org by dynasty & it's PiDis, some of whom coined d word Hindu terror to discredit RSS. Pranab da accepting to attend RSS meet is another defeat to COMMUNAL congis. #PranabForRSS

Warrior Princess@MyloMegha
If Frm President Pranab Mukherjee is planning to come back in politics he will lose his stature and respect.. He should serve people of this Country just like Abdul Kalam Sir did... He shdn't thrive for power #PranabForRSS #PranabWithRSS

bahuvirupaksha @bahuvirupak
Let us not get carried away. Pranab has agreed to be a guest. Nothing more. Nothing less And who needs certificated from the corrupt criminal communal dynastic fascists anyway

Amandeep Shukla@amanshukla
Last year, as President, #Pranab Mukherjee had addressed an event organised by an #RSS affiliate Bharat Shikshan Mandal in New Delhi. Probably, not many in the Congress noticed that. Mukherjee spoke on tolerance for pluralism

UP’s Deputy Chief Minister Dinesh Sharma has suggested that Lord Ram’s wife Sita is an example of a test-tube baby. “When Sita was born there must have been something like a test-tube baby. (Her father King) Janak ploughed the land and a baby came out of an earthen pot, she became Sita. This means technology similar to a test-tube baby must have existed,” Dinesh Sharma said at an event to mark “Hindi journalism day”. At the same function, the minister shared another gem and said journalism “started during the Mahabharata”.

Suresh@sureshbalann
#PranabForRSS None questioned when Kerala CM E.K Nayanar visited Vatican and gifted Bagavat Geeta to Pope. Where was Marxists hiding at that point of time