From not celebrating Id to being an active part of protests, Muslim students are taking the necessary steps as individuals to raise their voice. 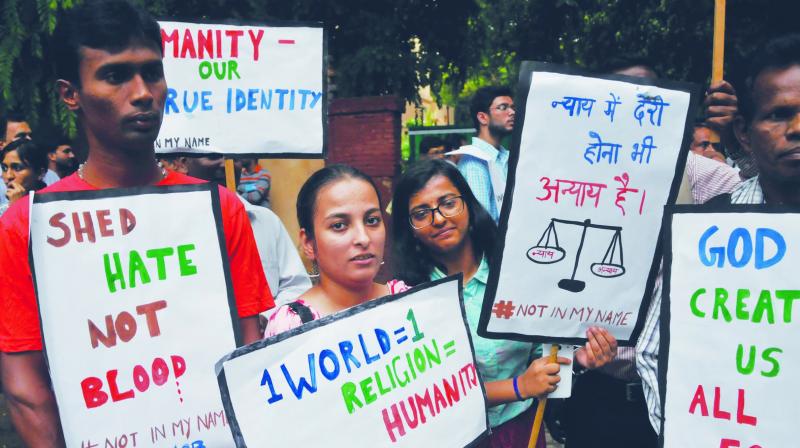 They are scared, angry and disappointed. The number of lynching cases against Muslims is increasing day by day and students from the Muslim community feel more wronged than ever before. From not celebrating Id to being an active part of protests against lynchings, these students have taken necessary steps as individuals, to raise their voice and spread awareness about the concern.

Class and education divide
Some students feel that belonging to an economically and educationally privileged background prevents them from fearing lynchings.

For 25-year-old Sumbul Mashhadi, an alumnus of Jamia Millia Islamia University, the fate of Junaid Khan’s (Ballabgarh lynching) and Mohammad Akhlaq’s (Dadri lynching) families didn’t allow her conscience to celebrate Id. “Mob lynching has had a lasting impact on me. I have realised that it won’t take much time for people to beat us down to death if they suspect that we are as much Indians as they are. The immediate existence of Muslims is being attacked. With every case of lynching, our rights are being lynched,” says Sumbul, who feels that she isn’t scared of lynching because she belongs to an upper middle-class family and doesn’t look or sound like a Muslim. “I am privileged that way,” she says.

Agrees Hasan Zaidi, who too isn’t afraid of being lynched because he is educated and feels lucky to stay in a metropolis. He explains, “An educated person living in Delhi would definitely feel more secure than those living in smaller cities. On a global level, it is very embarrassing that instances like these are happening in a democracy. For a country that is trying to boast  about its economic development in other countries, lynchings present us in a very negative way. It shows the lack of maturity in a society,” says Hasan, 27, who is currently doing a research on human development and chronic poverty.

‘As an individual, the only thing that I can do is raise my voice’
For these students, who belong to the community, which is being constantly targeted because of its religious connotations, raising voices and showing solidarity both individually and collectively is extremely important.

Eisha Hussain, 20, who just completed her graduation, couldn’t be a part of #NotInMyName protest in at Jantar Mantar in Delhi. But she made sure she that spread the word about the protest on social media.

“I couldn’t be a part of the protest but I shared the event on Facebook with my friends. As an individual, the only thing that I can do is raise my voice. I think that each one of us should dissent if we feel the need for it. Even during normal conversations in our daily lives, a lot of people have misconceptions about things and we should try clearing them,” says Eisha.

Sumbul — who was not in Delhi when the protest happened — instead took part of a social media protest.  “My friends and I wore black bands on Id and uploaded pictures and videos on social networking sites. For me, the #BlackBandAgainstMobLynching was a platform to tell the world that I have stopped believing those who chose to stay mum when a 16-year-old was being stabbed to death,” she says.

No more entitled to benefit of doubt
Insecurities come in handy when someone’s life is at stake because of mere rumours and assumptions. 23-year-old Farheen Sultana feels that these cases of lynchings have made Muslims lose their identity. “A Muslim man sporting a beard and kurta or a Muslim woman wearing a niqab or hijab is no more entitled to benefit of doubt. They are guilty until proven innocent. A practising Muslim in the country is subject to suspicion and prejudice. Mob lynching is a newly born evil which should be curbed before it consumes the judiciary itself,” says an anxious Farheen.