LGBTQ supporters came out on the road to commemorate the landmark Delhi High Court decision of 2009, but this time on bikes. 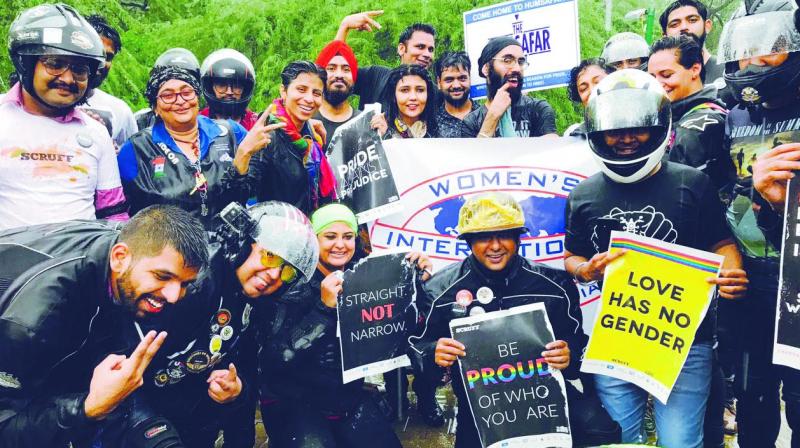 Even relentless rain couldn’t demoralise the participants at the ‘Bike Pride’ on Sunday morning.

Firstly due to some permission-related issue, the route of the event was changed from South Extension-Jantar Mantar to Katwaria Sarai-Hauz Khas. Secondly, on Sunday, the Rain Gods seemed in no mood to relent. However, despite these hiccups, 30 bike riders and as many pillion riders came out to commemorate the landmark High Court decision of decriminalisation of homosexual acts involving consenting adults, taken on July 2, 2009, which was overturned by the Supreme Court in 2013.

Lending their support to the LGBTQ community, both members and their allies hit the road, in what they called the first-ever “Bike Pride” in the city. The participants were completely drenched even before they began the procession as it had began drizzling since the wee hours. But they didn’t let the rain spoil their party. The bikers then began their rally with the participants waving posters and banners with messages asking for equality and acceptance of diversity. They also raised slogans to end hate crimes of all kinds.

The event was the brainchild of Scruff, a global dating and social networking app for men looking to meet other and Those In Need, an NGO working for the welfare of minorities. The Bike Pride saw two types of organisations joining hands. A number of organisations that raise voice for the community like Humsafar Trust, Tweet Foundation, Indian Aces, Youth LEAD, India HIV/AIDS Alliance, Adhikaar India, Love Matters and Sangini were supported by city-based bikers groups like Bikerni, Women’s International Motorcycle Association, Full Throttle, Bikers Paradise, Parindey, Turbo Xtreme, Youth Riderz Club and United Spartan Bikers among many others. 26-year-old Shadman Alvi from the Bajaj Avengers Club said, “We had an amazing experience. Our society believes that the grievance of the queer community is a non-issue. But we are trying to be with them in this fight. And to be honest, their protest hardly looks like a protest with so many colourful posters, song and dance and smiling faces. Also, we as a biking communty have always done rallies to support various causes and this time, we have extended our support to the LGBTQ rights and are hoping that society will take notice of our efforts.” 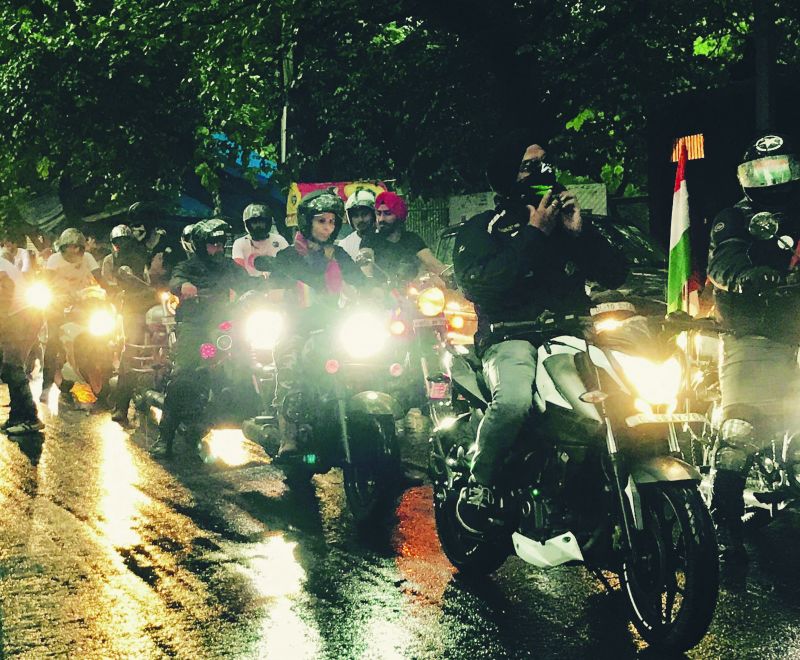 When the march concluded, activists Harsh Agarwal, Yashwinder Singh and Gautam Yadav explained the participants about the importance of the date and the decision and where does the community stand right now on both legal and social perspectives. Then the participants flew rainbow balloons in the sky to mark the conclusion of the pride. Harsh told us, “It was beautiful to see how the allies joined the ride despite the rains. Not a single person said that we should cancel the event because it was pouring. A big takeaway from such an event was how the biking groups came to show their solidarity to our cause. We had about ten women bikers and so we also dismissed the stereotype that attaches biking with masculinity.”