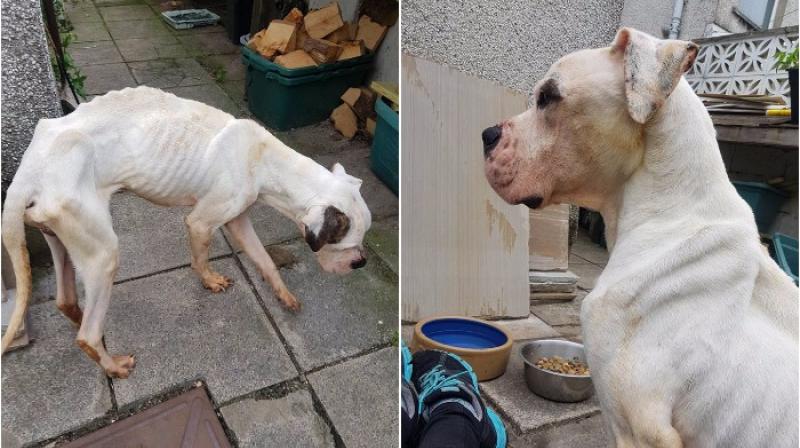 The American bulldog that was left abandoned by owner was later taken away by RSPCA (Photo: Facebook)

A shocking video has surfaced online where two men-in-uniform can be seen leading away, what appears to be an American bulldog, on a leash. The bulldog who is nothing more than a bag of bones was rescued after it was locked in a house without food or water for three weeks.

Katie Dunkely, 21, who lives in the neighbourhood at Barry, South Wales was so distraught that she climbed over the fence of the home where it had been locked up and abandoned and let herself in through the backdoor to save the dog.

She also found a female dog which was ‘extremely aggressive’ due to the conditions they had been left in.

Dunkely also called the police and Royal Society for the Prevention of Cruelty to Animals (RSPCA), who turned up and took away the two animals.

The female dog, who was in an equally bad state, was videoed being taken away in a cage. The male dog meanwhile was led away on a lead, which was also videoed.

It turns out that the dog’s owner had recently broken up with her beau and had left the house with the dogs still inside without any food or water.

She said she found them locked in the living room, covered in their own faeces and urine. The animals had no water and had been chewing away at food tins.

While she plans on giving a statement so that the reckless owner can be punished accordingly, Dunkley plans on adopting the male bulldog.