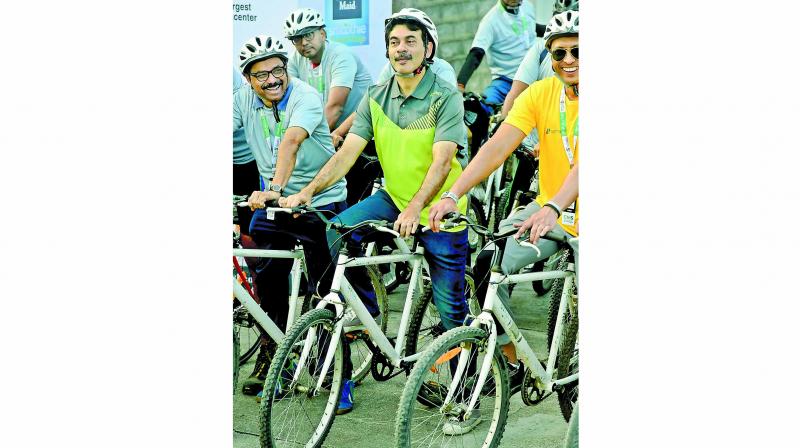 Last year when civic bodies of neighbouring Navi Mumbai and Thane introduced eco-friendly bicycle rental service, it not only inspired 35,000 rides on 200 bikes but also has now led BMC to initiate the same in city’s bustling areas. In a recent move, the BMC has decided to set up cycle-on-hire stands in association with a private agency in the locations such as railway stations, bus stops and business localities. The initiative, launched by the  BMC Commissioner Praveen Pardeshi, intends to encourage green wheels to contribute towards a safer environment. Speaking about the initiative Pardeshi says, “Actually, people don’t know that in congested roads, the speed of a bicycle is faster than a car; it is in fact almost double. The car not only moves slowly but also takes a lot of time to find parking and if you are using cycle, you can reach directly to your point. People are using cars and generating a lot of traffic and increasing the pollution levels. So the aim is to encourage people to opt for cycles. Peop
le travel by locals and they can’t take their bicycles in the train but if there are high-end cycles, they can just hire them back and forth without having to carry his own. So this adds to a new dimension of connectivity between a public transport to the final destination. This is very cheaper than what the share cab and auto would cost.”

The project has already begun to source the potential spaces in Bandra Kurla Complex and it is believed that the cycles would cost lesser than hailing an auto rickshaw or a cab from the same area. “We are planning for it and have already started looking for potential people to work on the project. After the due diligence, the operators will be assigned and they will do the micro level planning of the spaces to set up stands. We are planning this set up at all the metro stations,” informs Commissioner R A Rajeev of Mumbai Metropolitan Region Development Authority.

Ever since the news has been out in the city, it has created a great buzz among cycle enthusiasts and the regular commuters who have to jostle the crowds during their morning and evening commute. “This is a good initiative for a shorter distance. I have tried some of their stands in Thane and they are pretty convenient, however they need a lot of improvement. The stands are difficult to find. They should put some sign boards to suggest the way to cycle stands,” says Dinesh Nainani, a cycling enthusiast. To this, Pardeshi says, “There will be bicycles near the every bus stops and train stations so this will be pretty much visible to people.”

While Dinesh believes that there needs to be a good awareness program about the introduction of cycling, another cyclist Ashwin Baliga of Borivali Cyclist Association believes that BMC has to make safer roads for the riders. “The traffic is so bad in the peak working hours and it is difficult for the bikers to move between the chaotic traffic congestion, then who will assure the safety of a biker? There are a lot of accidents happening everyday,” asks the cyclist.

Talking about the safety measures for the bikers, Rajeev Atre, DCP Traffic, says that the opening and closing areas will remain the challenge, however as far as BKC area is concerned, the inside roads are pretty much open. “Each road crosses at 90 degrees with each other so the roads are very open for riders. However the traffic condition is bad only when you are exiting from the station,” says the officer.

When asked if the traffic department is intending to provide any safety measures for riders and to encourage the eco friendly move, he assures, “We welcome such eco friendly initiatives in the city and will assure the safety of the people using the cycle service. Although giving the riders a separate lane would be a difficult, practically. We would always be there when needed for safety and traffic management.” He further suggests that the stands need to be set up in such areas where it becomes convenient for office goers.

Plan two routes: Travelling across the traffic clogged roads can be stressful, so always have an alternative route in mind.

Fuel up: We don’t need to tell you how important having a good breakfast is before tou peddle away.

Use signs: While you may be templted to yell and shout while commuting, it is more useful to make use of hand signals as they are easy to understand.

Carry a change: Often, cycle to work can leave you sweating, it is better to carry an extra pair of work clothes in a  your bag.