US nurse arrested for not giving police patient's blood

An investigation into the incident has been launched. 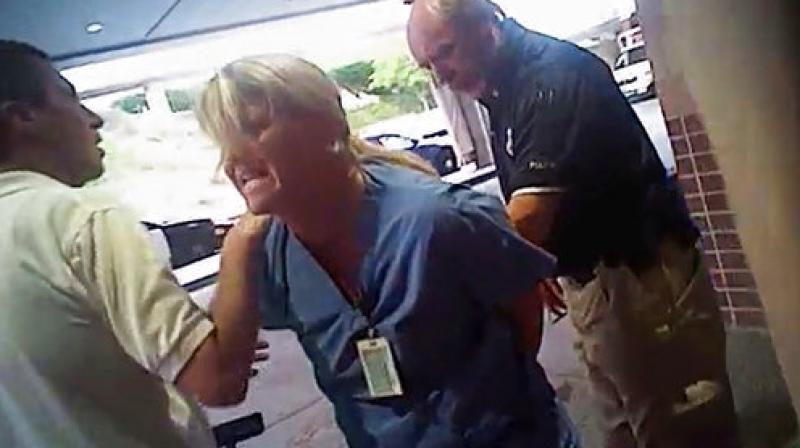 In this July 26, 2017, frame grab from video taken from a police body camera and provided by attorney Karra Porter, nurse Alex Wubbels is arrested by a Salt Lake City police officer at University Hospital in Salt Lake City. (Photo: AP)

Los Angeles: Police in the US state of Utah have launched an investigation after video footage showed an officer forcibly arresting a nurse for refusing to draw blood from an unconscious patient.

At least two police department employees, including the officer involved, have been placed on administrative leave pending the investigation, the department said. The images captured by police body cameras and the University Hospital in Salt Lake City show Alex Wubbels screaming for help as she is manhandled out of the medical center and handcuffed.

The nurse was detained for around 20 minutes in a police car before being released after administrative staff intervened, according to Suzanne Winchester, a spokeswoman for hospital.  Winchester told AFP blood samples could be handed over to the police only if the patient had given consent, was under arrest or there was a warrant.

None of these conditions was met, said Winchester, who added that Wubbels had correctly followed protocol. "This is very out of the ordinary. Everybody was very shocked -- it was upsetting for our staff," she added.  The incident unfolded on July 26, but the video was only made public on Thursday at a news conference held by Wubbels. "Stop, stop -- I've done nothing wrong... This is crazy, please sir, you're hurting me," she is seen pleading as she is frogmarched to a police car.

Wubbels told journalists she felt betrayed and angry at her treatment when she was only trying to keep her patient safe.  In a subsequent statement, she said the city's mayor and police chief had both extended personal apologies for her treatment. "I have accepted those apologies," she said. "The outpouring of support has been beyond what I could have imagined," she said.  "Since the incident, the city has taken this matter seriously, and I believe that positive change will occur."

Salt Lake City police chief Mike Brown said he was "alarmed" by the footage and that an internal affairs investigation had been launched.  "To date, we have suspended the officer from the blood draw program. We have already replaced our blood draw policy with a new policy," he added.

In an update on Twitter, the police department said two employees have been put on administrative leave pending the investigation. "All remaining officers on the blood draw program have reviewed, and are operating under, the new policy and protocol."

District attorney Sim Gill issued a statement on Facebook calling for a full criminal investigation, however. "Injustice against one is an injustice against all. Everyone deserves a fair process and institutional accountability is our collective responsibility," he said.