Bonding over love for food

However, when we ask him to rate himself as a cook, Vishal quickly replies, “On a scale of one to ten, I would score two!” 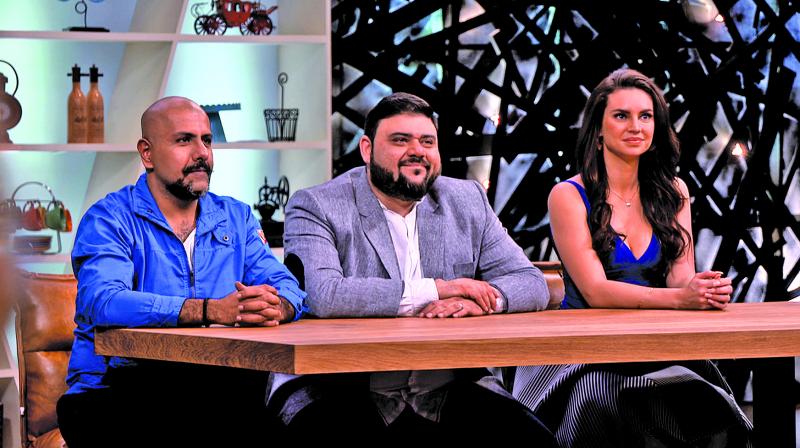 In a fun chat with us, Sarah Todd, Riyaaz Amlani and Vishal Dadlani, who are judging the reality show Grilled, talk about how much of a foodie they are, their thoughts on the show and more.

Fox Life’s reality show Grilled has become an instant hit with the audiences for two reasons — its one-of-a-kind concept and for the interesting choice of judges. Food and beverages tycoon Riyaaz Amlani, model-turned-restaurateur Sarah Todd and musician Vishal Dadlani have been keeping the viewers hooked to the show, which started with 12 home cooks, amateur chefs and food entrepreneurs pitted against one another to fight for the funding to kick-start their own restaurant businesses.

We got in touch with the judges as they get candid about their love for food, the current scenario for restaurateurs in the country, their culinary skills and what makes Grilled stand apart from the rest.

Speaking about the reality show, Vishal excitedly remarks, “It’s unusual for me to be talking about anything other than music! However, it’s also a great change. I love food and restaurants, and I’ve even invested in a few (with no success, sadly!), but I think I’ve learnt something worth sharing, along the way. Also, most importantly, it’s great to watch young entrepreneurs follow their dreams, and even better to help them along, if one can.”

Sharing with us about how much of a foodie he is, the musician states, “I’ve been fortunate to dine all over the world and love to try new and exotic food. My favourite meals are usually anything with subtle layers of flavour, especially when they come as a pleasant surprise. I’m not a big fan of heavy, greasy, over-spiced food.”

However, when we ask him to rate himself as a cook, Vishal quickly replies, “On a scale of one to ten, I would score two!”

Riyaaz Amlani, on the other hand, speaks about the contestants and what they should work on more — “I’m looking for people with original ideas — something unique to offer to people and something people haven’t seen before. I’m looking forward for real passion among the contestants that will make sure they don’t have just superficial ideas.”

Based on his experience of being a part of Grilled, he claims, “I’ve not seen a show as deep as this, as it goes into each and every aspect of what it takes to be a good restaurateur — I think every episode of this would be a master class for the aspirants.”

As the conversation veers towards the current scenario for restaurateurs and aspiring food entrepreneurs in the country, Riyaaz muses, “I would say this is the best of times and also the worst of times — people are hungry for good products and they’ll embrace you if you come with one and if you come up with a bad idea, then they would reject you easily too.”

Meanwhile, Sarah says she’s still pleasantly surprised about judging a reality show as she herself was a contestant on MasterChef Australia hardly three years back.

She says, “I am kind of shocked to be honest as only two and a half years ago, I was sitting in their place as a contestant on MasterChef and I’m  amazed at how far I have come since then!”

Sarah, who now owns a restaurant, Antares, in Goa, adds, “I’ve learnt so much throughout my journey in setting up my restaurant and I’ll be constantly sharing my insights with the contestants.”

Vishal concludes the conversation on a funny note by saying, “Riyaaz and Sarah are experts in their fields and for the first, and perhaps the only time in my life, I’m the glamour (laughs)!”