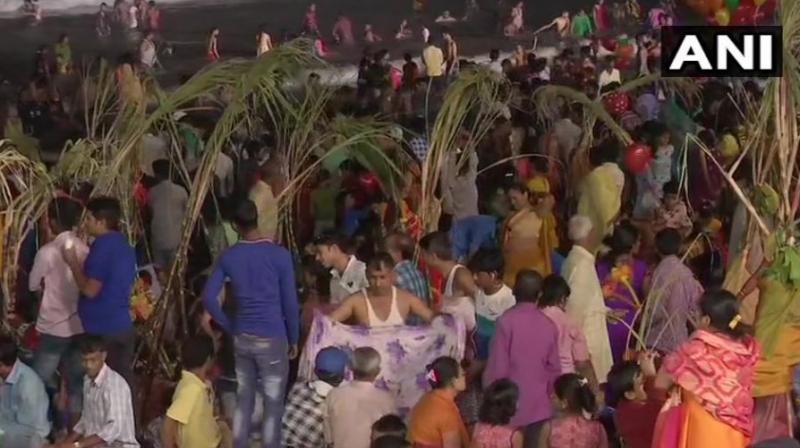 Chhath Puja, dedicated to the Sun god, is celebrated on the sixth day Kartik month of Hindu calendar. (Photo: ANI)

On the fourth and final day of the Chhhath Puja, devotees in different parts of India thronged river banks to offer 'Arghya' to the rising sun on Sunday.

Celebrations began at early morning in Kanpur, with devotees of all age and genders gathering alongside river bodies to offer prayers. Clad in traditional saris, women were spotted performing puja and offering prayers to the sun. Men and women carried offerings of sugarcane and fresh fruits, coconut, jaggery among other things to perform Chhath prayers.

Large number of devotees gathered around different decked up ghats along the Ganga river to offer prayers to the sun. Several devotees stormed the Patipull Digha Ghat and Kadam Ghat to offer 'Arghya' to the rising sun.

Mumbai residents, primarily those hailing from UP and Bihar, were seen submerged in the festivities at the Juhu Beach where morning prayers were offered. Elaborate arrangements were made for the devotees to take a holy dip into the water while performing the puja.

"The festival is not just restrained in U.P., Bihar, but has expanded its horizons in other countries as well where people celebrate the festival with a lot of zeal and fervour", said Madhavi Singh, a devotee who was present with her family to offer prayers at the Juhu beach.

The Chhath puja celebration in Gorakhpur was celebrated with gaiety and fervor. Scores of devotees gathered at the Suryakund Dham to perform the rituals. Women were seen standing in knee-deep waters at different ghats while singing the Chhath songs.

In Bhuwaneshwar the devotees were seen gathered at Shalimar Talab to offer 'Arghya' to the rising sun and offer prayers. After the puja was over, women were seen distributing prasad among other devotees.

The devotees in Delhi too seeped into the festive spirit by celebrating the auspicious occasion, gathering early morning on the Ghats at ITO, Geeta colony, Kalindi Kunj among other places.

Chhath Puja, dedicated to the Sun god, is celebrated on the sixth day Kartik month of Hindu calendar.

On the fourth and final day of 'Mahaparv', Usha Arghya is performed in which devotees offer various fruits and vegetables to the Sun God along with an offering of holy water. It is after this the Chhath fast culminates and the 'prasad' is distributed among family and friends.