The power of petitions

An increasing number of people are using social media platforms to start and circulate online petitions on a host of issues. 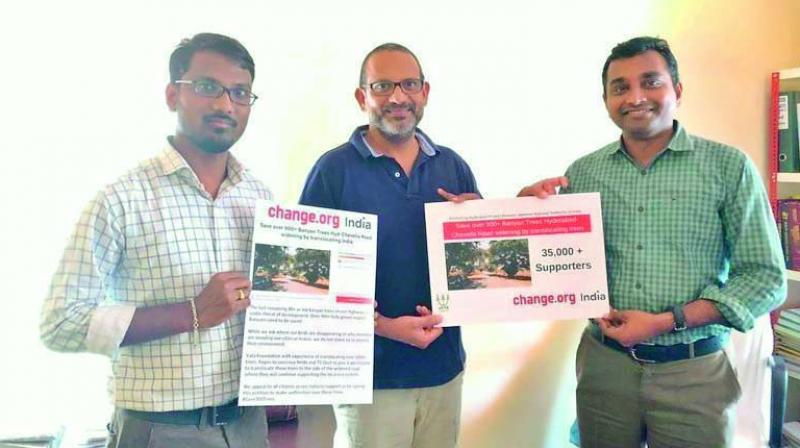 Uday Peddireddi from Hyderabad, whose petition successfully managed to prevent hundreds of trees from being cut when a national highway was about to be built.

Online petitions are effective in spreading a message with a simple press of a few buttons. The more people sign a particular petition online, the more likely the government or company is to respond or be held accountable.

Currently, there is a petition on online platform Change.org asking for onscreen violence against women and girls to come with a statutory warning. More than 50,000 people have signed a petition.

Mahika Banerji of Breakthrough, who first sent this petition to Prasoon Joshi (Chairperson, Central Board of Film Certification), says, “When actors are shown smoking cigarettes or drinking onscreen, health advisories and statutory warnings immediately pop up in the corner, alerting us against the hazards. But when a person is shown terrorising a woman onscreen and hitting her while claiming to love her, we don’t see any trigger warnings. Ironically, both these scenes played out in the recent film Kabir Singh. When some of us took to social media and objected to the glorification of violence, we were dismissed saying, “violence on women is normal” and “how else will a passionate man show that he loves a woman?”

Interestingly, all the online petitions  have been started by people who have a strong urge to create change. “The redraw misogyny onscreen campaign was started by Breakthrough to counter misogyny in Indian cinema,” states Nida Hasan, country director, Change.org.  But do petitions really make a difference or are they merely instances of ‘slacktivism’?

No single solution
“Maybe not in isolation, but petitions do make a difference. Especially when it is the consolidated response of those who are expressing themselves to people in positions of power and who have the capacity to bring in effective change. This is further enhanced by the outreach and popularity of social media,” explains Mahika, adding, “When we at Breakthrough published the petition to the CBFC  demanding that onscreen violence against women and girls be called out for what it is — we received a lot of support due to social media and celebrity backing, from Swara Bhaskar. Now, we’re almost 50,000 signatures in.”

Closer to home, the Errum Manzil petition was started by a descendent of the Nawab’s family to raise public awareness and garner public support for the cause. “The family also filed a legal petition in court. It is common for those who move court to also start online petitions to demonstrate public support for their cause,” adds Nida. No doubt, petitions with millions of signatures send a powerful message about the will of the citizens. “Online campaigns help create awareness and bring the issue to the public domain with ease. The fact that millions of signatures have been made to a campaign, makes the person whose attention and action is sought to act responsibly,” says RTI activist Vijay Gopal.

Impact stories
Citizens have widely used online platforms to express their concerns and mobilise support for environmental issues. Many have gone on to create impact stories. Like Uday Peddireddi from Hyderabad, whose petition successfully managed to prevent hundreds of trees from being cut when a national highway was about to be built. Shilpi Sahu, a marathon runner from Bengaluru, also filed a petition that played a role in persuading Procam International, the organisers of the Mumbai Marathon, to considerably reduce plastic and have a greener marathon in 2019.

Others, like Spurthi Kokinaka, a WASH and gender rights advocate, started a campaign demanding that the Telangana State Women’s Commission have a website so that it can push women’s safety agenda forward online as well. Yet another campaign by Almas Virani, a single mother who is raising her seven-year-old son to question gender discrimination, focused on gender equality. “Through her campaign, she convinced Rajiv Chilaka of Green Gold Animation, the makers of Chota Bheem, to make the character of Chutki stronger,” says Nida.

“These success stories prove that petitions can inspire real change and millions start talking about it. Then the resolver is bound to act as the issue comes out in the public domain,” adds Vijay. So, does adding your name to an online petition make a difference to a cause? Says Nida, “Personal stories that speak to people’s hearts can drive large-scale change. For example, the government decided to restrict the sale of acid after an  acid attack survivor Laxmi told  her story. When a petition is directed to the right decision maker who has the power to make the specific change, we see great results.”

Petitions matter
When targeted to the right decision maker, a petition does not need a large number of signatures. “For example, 19-year-old Bengaluru student Garvita Gulhati’s petition addressed to National Restaurants Association of India, asked for all restaurants to adopt the #GlassHalfFull concept to stop wastage of water in the food and beverage industry.  With just 13,000 signatures on her petition, Garvita was able to work with NRAI to make this petition a victory on World Water Day this year,” says Nida.