Atlantic haven is a test bed for planet's sickly oceans. 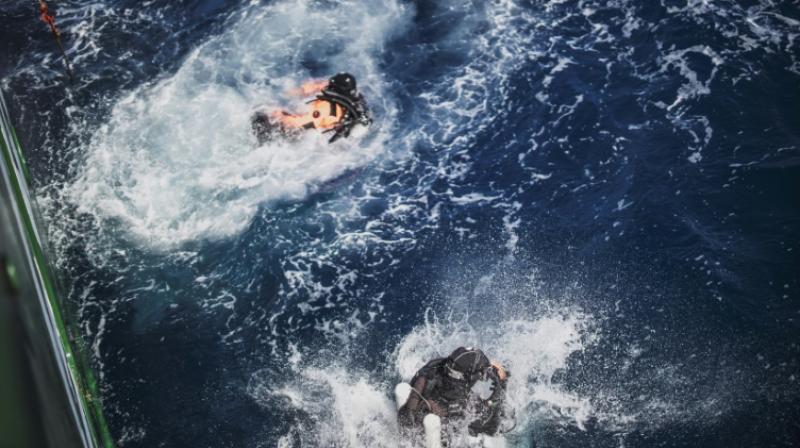 Vema -- named after a vessel which discovered it in the 1950s -- lies in international waters. (Photo: AFP)

Atlantic: Clad in diving gear or oilskins and gumboots, a team of scientists and activists spent weeks in the South Atlantic, enduring storms and choppy seas to check up on a place almost no-one has heard of.

Their mission: To monitor an underwater mountain for clues of global warming and plastic pollution -- and vet the impact of a 12-year-old ban on trawling. Researchers with Greenpeace sailed a thousand kilometres (600 miles) northwest of Cape Town to Vema Seamount, one of the most remarkable, yet poorly-known, features of the Blue Planet.

The volcanic mountain rises a colossal 4,600 metres (15,000 feet) from the ocean abyss -- almost as high as Mont Blanc, the highest point in Europe. Its conical peak, eroded to a flat top by waves over thousands of years, reaches to just 26 metres (85 feet) from the surface.

AFP journalists joined the 30 crew, scientists and campaigners for 10 days of their three-week long exploration. Aboard the research ship Arctic Sunrise, specialist divers shared jokes as they put on bright orange and black dry suits, strapped on air cylinders and ran through final checks of high-resolution cameras.

They jumped out through the pilot door, disappearing in the deep blue waters for about 45 minutes -- a twice-a-day ritual, weather permitting. Below the waves, the divers took samples and recorded an inventory of sea life.

Vema is an ocean oasis -- its shallow summit is bathed in sunlight, enabling algae, kelp and black coral to grow, which in turn draw fish and crustaceans. The divers resurfaced, elated. "There were lots of fish around us, just swimming around us, in a big circle. It was absolutely awesome to see. Beautiful!" said Dutch diver Sander Jansson. Vema -- named after a vessel which discovered it in the 1950s -- lies in international waters.

Little more than one percent of ocean areas lying outside national jurisdictions benefit from some form of international protection, according to the UN's Ocean Action website. Vema is fortunate to be one of the very few areas of the deep seas that enjoy such a shield.

In 2007, an intergovernmental fisheries science and management body, the South East Atlantic Fisheries Organisation (SEAFO) banned bottom trawling on Vema and other seamounts. Some of the species at Vema have clearly flourished since then. "There is so much life down there," said marine biologist and expedition leader Thilo Maack.

"There is crayfish, there's a lot of seaweed, there's a lot of sponges and fish of any kind". He added: "This is just a perfect example of what happens if we leave nature on its own for a certain period of time even if it was overfished, it will replenish".

The sunnier outlook even extends to the Tristan rock lobster -- a species that was twice driven to near-extinction to meet seafood demand in East Asia. "Who says there are no lobsters down there?" quipped German diver Pascal van Erp as he stepped back on deck after his first dive.

When the current was too strong for divers to go into the water, the researchers launched an underwater drone and sat inside a blue shipping container on the ship's deck, monitoring screens sending back video footage.

Marine conservation organisations are pushing for ocean havens to be vastly expanded.