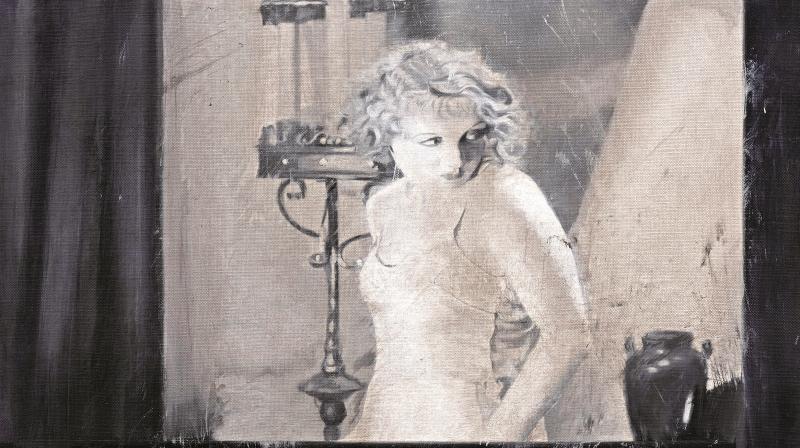 From making some of the most engaging silent film thrillers to becoming the father of the modernday psychological horror thrillers, Alfred Hitchcock’s cinema, undoubtedly, has served as an inspiration to some of the very well known filmmakers of our time. Now, Hitchcock’s black and white crime-thriller Blackmail (1929) has come alive on 36 canvases in the well-known artist Atul Dodiya’s work Seven Minutes of Blackmail.

Currently exhibited at Chemould Prescott Road Art Gallery, Seven Minutes of Blackmail is not only Atul’s homage to Hitchcock, but also is evidential of the artist’s personal fancy with celluloid. In his latest work, Atul retells the seven minutes of thrill brewing when Alice White (Anny Ondra) gets invited to a studio by an artist and agrees to model for him. 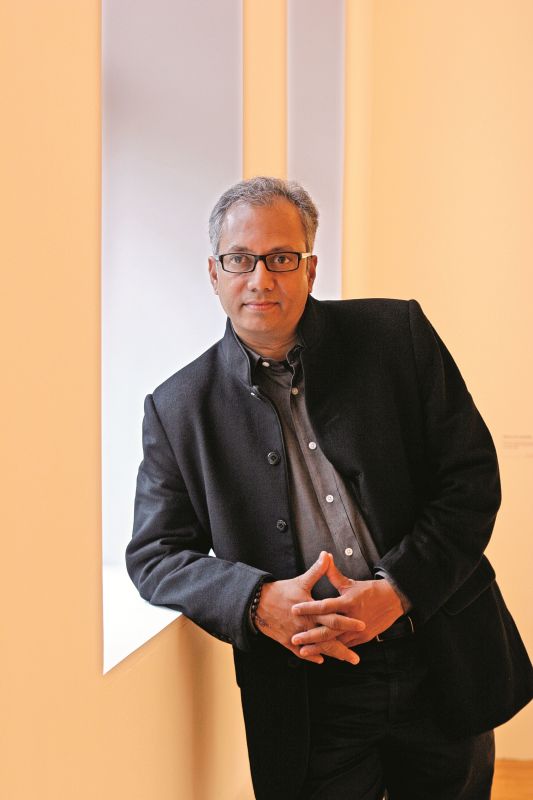 Although, she soon discovers that the invitation was just a ploy to seduce and even molest her, as the artist forcibly kisses her. In self-defense, she ends up killing him with a butter-knife and escapes the scene, only to be blackmailed by a witness.

Fascinated by the plot unfolding only in seven minutes, Atul was inspired by the genius of Hitchcock’s craft, as he explains, “All of this happens in seven minutes. And that’s what I noticed when I was rewatching the movies. Since it was about an artist, those references kept coming back, so I thought I could do something with it in my work.” 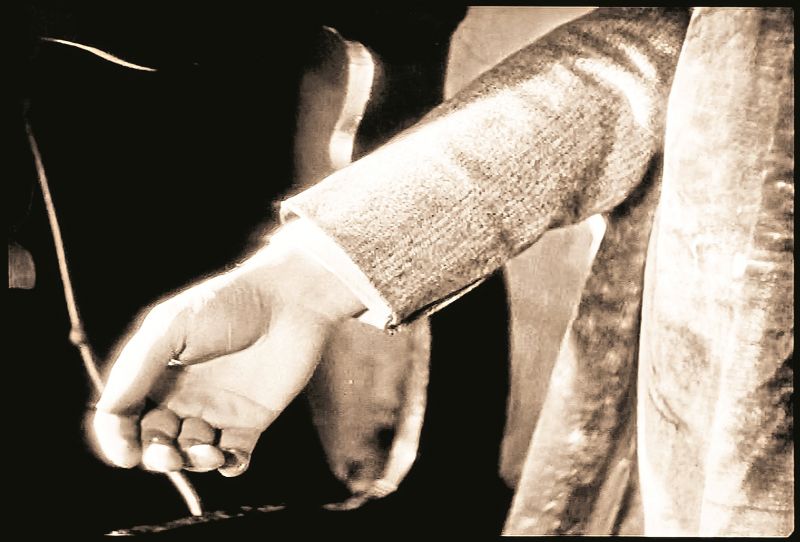 Displayed in a sequence, the oil on canvas medium appears as contact sheets or celluloid films. To be able to capture the drama of the moving images into stills, Atul kept taking pictures on his phone and his camera while the movie was playing, and then sometimes he would pause the film and then take images of crucial stills.

“I would keep on checking at what particular angle, if someone is moving from left to right, then at precisely which point I would like to stop that figure, the expressions he or she would be giving and what kind of hand gestures would be conveyed. So that was a big task, almost like editing,” he says. 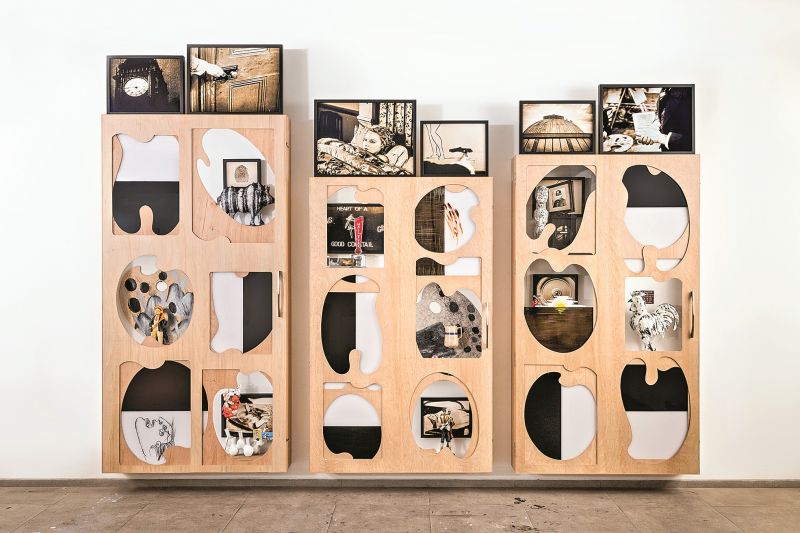 However, Atul has taken the artistic liberty to delve away from realism, as he accentuates the drama of the scene in his own artistic styles.

“While I was painting, I didn’t make it photo-realistic, but I would give some areas deeper tonality, some smudgy, some sketchy, and sometimes very expressionistic,” reveals Atul. 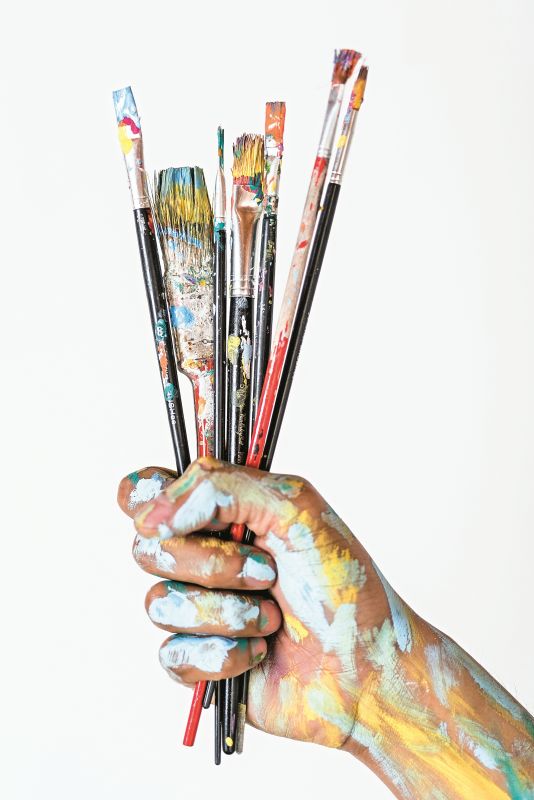 He would further add loose brush strokes in addition with adding and removing layers of transparent black colour to get the effect of old silver-gelatine prints. In addition to the scene, Atul forayed into abstract paintings for the first time with art palettes painted on canvases in the collection.

He quips, “In fact, murder mystery opens a door for me to indulge in abstraction.”

Looking at palette as a piece of evidence, Atul also finds the mess on the palette reflective of the artist’s mental process.

Juxtaposing his view to the murder committed in the studio, he elucidates, “I thought what if this abstraction, this mess that one sees, has a lot to say about the evidence of murder, and what was happening in the girl’s mind, what was she going through emotionally.”

Seven Minutes of Blackmail opens the artist as a cinephile, although it isn’t the first time that Atul has taken celluloid to the canvas.

From his pastiche self-portrait The Bombay Buccaneer in which he juxtaposes himself on Baazigar’s poster to his postcardsized painting of Anil Kapoor threatening to kiss Sridevi in Roop Ki Rani Choron Ka Raja, the artist is known for finding cinema as his muse.

Having grown up in the city of Bombay watching movies with his cinemabuff mother, the films and kitsch pop-culture keep coming back in his works.

“I always have admired great artists and painters, sometimes I borrow, appropriate, pay homage and get influenced by the imagery of their work. If I can talk about Picasso and Matisse, then why not Satyajit Ray, Goddard, Bergman, Antonioni, or Fellini – the masters of filmmaking. I have seen their work quite carefully over the years and felt inspired to respond or include to these images, but along with that aspect, there is certain abstract aspect that I would add from my own side and how I am putting those images, rendering them; the whole thing can be quite complex also, but it is a very engaging process for me,” he concludes The exhibition is ongoing at Chemould Presscott Road Art Gallery till February 21.