Jordan hosts refugees from more than 40 countries, including over 650,000 people from Syria, according to the UNHCR. 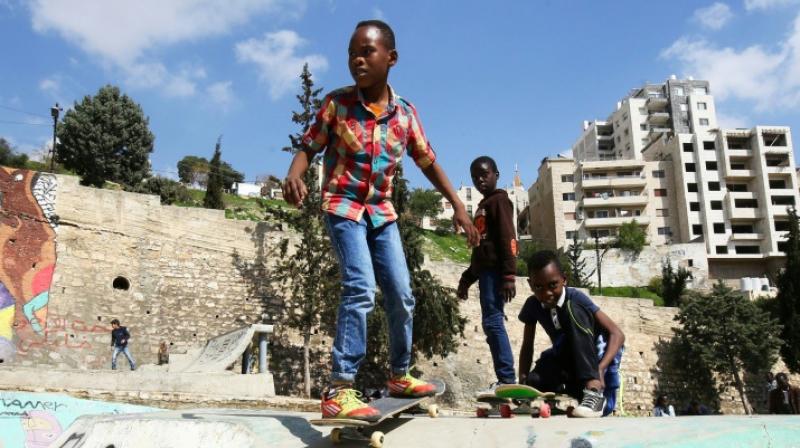 This park has become a breath of fresh air for young refugees from Sudan, Somalia, Yemen, Iraq, Syria and Palestine. (Photo: AFP)

Hair flying in the wind Manar, Amniya and Farida hurtle down the slopes of "7Hills Skate Park" in the Jordanian capital Amman where refugee children come to play.

The 650-square-metre (almost 7,000-foot) concrete space was built in December 2014 by skateboard enthusiasts from around the world.

The money was raised during a fundraising campaign by a German NGO and a local association that offers free classes for the children of refugees from countries such as Syria, Iraq or Sudan.

Mohammed Duma, a 40-year-old Sudanese man who fled the war in Darfur, looks on with pride and a touch of apprehension as his two daughters, aged four and eight, learn to ride a skateboard with their trainer.

"We come here every Monday. Life in Jordan is very expensive, it's the only place where I can take my girls to play and have fun for free," said Duma.

He has applied with the United Nations High Commissioner for Refugees (UNHCR) for relocation to the United States, Canada or Britain.

Salima Issa, a 26-year-old housewife, sits on a patch of grass with her two-year-old son, who is busy nibbling on crackers.

She watches as her son Mohammed, four, and eight-year-old daughter Amniya cruise by on their skateboards.

Issa too fled Darfur, where the conflict that broke out in 2003 has killed hundreds of thousands and displaced millions of others.

The skatepark's name was inspired by the topography of Amman, a city built on seven hills.

"This park has become a breath of fresh air for young refugees from Sudan, Somalia, Yemen, Iraq, Syria and Palestine," said Mohammed Zakaria, one of the park managers.

Skateboarding "is a difficult sport, which allows you to gain self-confidence and learn that falling is not the end of the world, and that you have to try a second and third time to succeed," he explained.

"Life is like that and we all learn from our mistakes," said the 32-year-old Jordanian.

He said around 140 boys and girls take free classes every week, mostly run by foreign volunteers.

Jordan hosts refugees from more than 40 countries, including over 650,000 people from Syria, according to the UNHCR.

Yussef Khaled, 14, who lost his father in Somalia's war, arrived six years ago with his mother and sister, and does not miss an opportunity to come to the skate park.

"There are not many places to have fun in Amman, and even if there were, we wouldn't have the money to go anyway," said the teenager.

"This place makes me forget that I'm a refugee," he said, showing off his latest trick on the skateboard.