Cooking up a storm

Australian chef Tony Howell chats about the similarities between Indian and Australian cuisines and how food binds us all. 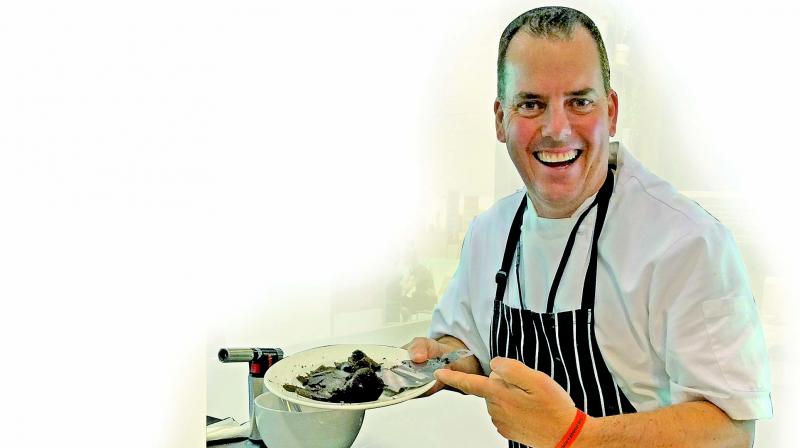 Chef Tone specializes in Western Australian cuisine and the influences from this region can be seen in his cooking style.

A chef is not just a person who cooks and feeds everyone for a paycheck, but the real qualification is far more complex. Fusing different flavours to create a memorable experience out of basic ingredients is what makes a good chef stand out  from an everyday cook; and, that’s what we discovered when we met award-winning chef Tony Howell from Australia, who visited Mumbai recently.

Chef Tone, as he is popularly known among his fans, is also Tourism Australia’s culinary brand ambassador and the face of Restaurant Australia. Speaking about his journey as a chef, he tells us, “My passion for cuisine began at a very young age and the reason I started cooking was to buy surfboards. As a 14-year-old, all I wanted to do was go surfing. It was whilst working in a Mexican restaurant that I discovered how much I enjoyed being in the kitchen— the bond between chefs, the hard work and stress but most of all the camaraderie— it was something that I enjoyed. From there, I went to a better restaurant and learned from the best chefs in the city. I started an apprenticeship when I was 16 years old at Perth’s best restaurant at that time, a French silver-service fine dining restaurant called Luis and did four years study at culinary college.” He currently heads a restaurant Cape Lodge in Margaret River (Australia) and has been featured in Condé Nast Travellers Gold List Best Food Category in the year 2005, 2008, 2011 and 2012.

While Chef Tone started quite young, he has already ticked off some important milestones in his career. He was flown to LA to cook with Curtis Stone at his restaurant Gwen, and has worked alongside legendary chef Shane Osborn at a special dinner at Cape Lodge (Shane was the first Australian chef to be awarded one and then two Michelin Stars when he had Pied à Terre in London).  He has hosted some amazing chefs like Renee Redzepi, Sat Bains, Alex Atala and Rick Stein at Cape Lodge, and cooked for rockstars like Sting.

Howell mentions that a chef’s profession has both high and low points, and one of the best things about this field is being part of the kitchen brigade. He elaborates, “The good thing about being a chef is that I get to use my creative side, see the expressions on people’s faces when they see the meal and the feedback after they have eaten it. It’s a job that you can take with you around the world, you can make interesting and new friends. Food is a common thread that binds us all – whether you’re a chef or not, we all have to eat. And, the worst part is the long hours and missing out on family time around Christmas. My advice for anyone who wants to be a chef is to “write everything down.” A chef once showed me how to make a sauce from a fish stomach and it was amazing. I made it a few times, then I didn’t make it for a few years, and I have forgotten the recipe,” laments the chef adding that it is essential to learn the classical styles first and build from there rather than jumping straight into molecular gastronomy. “In other words, you need to learn to walk before you can run. Gather information from as many chefs as you possibly can, come up with your own style and avoid the temptation of following trends and becoming one of the herd.”

As Chef Tone specializes in Western Australian cuisine, a lot of influence from this region can be seen in his cooking style. Speaking of his signature style, he informs, “Western Australia absolutely influences my cooking style – it’s the amazing produce that we have all around us. We’re surrounded by clean waters and fresh pastures. Australia is melting pot for so many different cultures and we take from those, but we try to keep things clean and not overpower the taste of the great protein, which Western Australia is renowned for.  As an example, in our dinners, we are using prawn heads to make the bisque.”

Howell, who visited India for the first time was quite overwhelmed by his experience and food tasting in the country. While comparing the Indian and Australian food culture, he points out, “The similarities between the two food cultures are pungent flavours in some of our dishes in Australia, particularly the dishes that have an Asian influence. Both Australian and Indian cuisines are outstanding on their own. I’m not sure I’d blend Australian food and Indian food on a platter. I’ve only been in India for about a short period, so the food journey is continuing. I had a great stay at JW Marriott in Juhu and their restaurant is brilliant. Nikhil Agarwal from All Things Nice took me to a place called The Bombay Canteen and it was an absolute winner. We had an Indian Prawn dish and duck curry and both dishes had similarities to Thai food – I’ve spent a bit of time in Thailand over the years. The modern Indian food we had was fantastic and outlined regional flavours – it was almost like traveling India in one restaurant. My next trip will be to the capital to host the second dinner in India at JW Marriott New Delhi Aerocity. A curated a five-course modern Western Australian cuisine for the guests is what I plan to present for the night. I can’t wait to come back and spend more time in India, but next time I’ll make sure that there’s more travel and less work so I can experience more.”