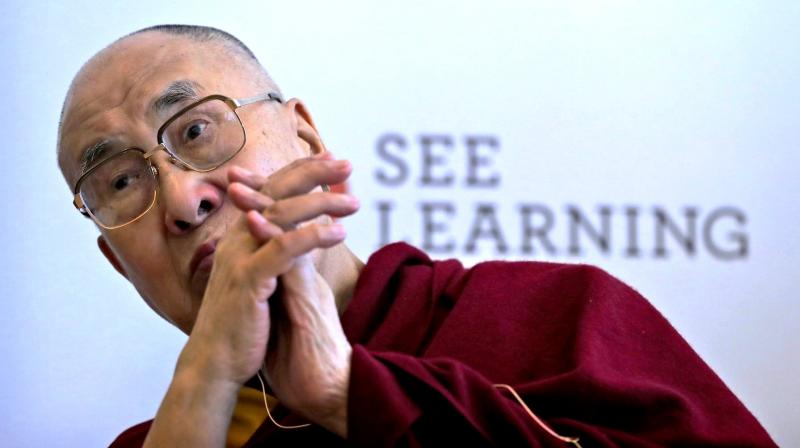 Tibetan spiritual leader the Dalai Lama listening to a question during a press conference in New Delhi. (Photo: AP)

New Delhi: Tibetan spiritual leader Dalai Lama Thursday praised New Zealand Prime Minister Jacinda Ardern for taking a compassionate approach in dealing with the aftermath of the recent terror attack in her country and said 21st century should be the century of peace and non-violence.

At a press conference in New Delhi, he said that New Zealand serves as a "living example" for others, as to how to respond with calmness and compassion in the wake of such incidents. New Zealand is one example where a country's leader tried to deal with a "very sad situation" through compassion, he said when asked about the incidents of violence in the last few years in many countries, stemming from hatred.

"She tried to tackle the problem through non-violence, compassion and respect for others. So, there are methods to deal with violence. And, although what happened was a very sad incident, there was no further increase in violence," the Dalai Lama told reporters.

"I really admire the New Zealand prime minister, that lady. She is wonderful. So, that is a living example and everyone can learn from that," he said. At least 50 people were killed and several others wounded in a hate-filled terror attack by a shooter, targeting two mosques in the New Zealand city of Christchurch in March. The attack sparked global outrage, drawing condemnation from leaders and institutions around the world.

After the attack, Ardern's humane approach in consoling a grieving nation and dealing with its aftermath, including meeting the Muslim community members, was widely praised. "We saw so much violence in the 20th century, two world wars and so much more. Hence, we must deal with our problems now through dialogues and non-violent measures. And, through peace we can achieve it all," he said.

Dalai Lama also lamented that most of the problems the world faces currently are "our own creations". "Even the killings we are seeing today around the world, doings of humans only. Our education today is only teaching us to be materialistic and not seek happiness. So, in education, that horizon of emotion is necessary and compassion in heart is required to achieve happiness," he said.

The Dalai Lama also asserted that India is a country based on secular philosophy at the press conference. He said that India had the "potential to help humanity" by combining modern education with the ancient wisdom of the country.

The Dalai Lama also answered a question related to Tibet’s future with China. He reiterated that he is not seeking independence for Tibet, but would prefer a “reunion” with China under mutually acceptable terms. “I prefer Tibet remain within the zone of China. Some kind of reunion,” he said. He added that Chinese and Tibetans could live side-by-side, with China helping Tibetans economically and gaining from their knowledge.

The 83-year-old Dalai Lama has been living in exile in India since a failed 1959 uprising in Tibet. China claims Tibet has been part of its territory for more than seven centuries. Many Tibetans insist they were essentially independent for most of that time.

They have protested against what they regard as China’s heavy-handed rule imposed after the People’s Liberation Army’s battled its way into the Himalayan region in 1950. The Dalai Lama said he developed direct contact with the Chinese leadership in 1979, but little progress has been made since because China still thinks he is seeking independence for the region.