Discovery of 2 huge structures on bottom of Indian Ocean this week had some hoping Malaysia Airlines flight MH370 had finally been found. 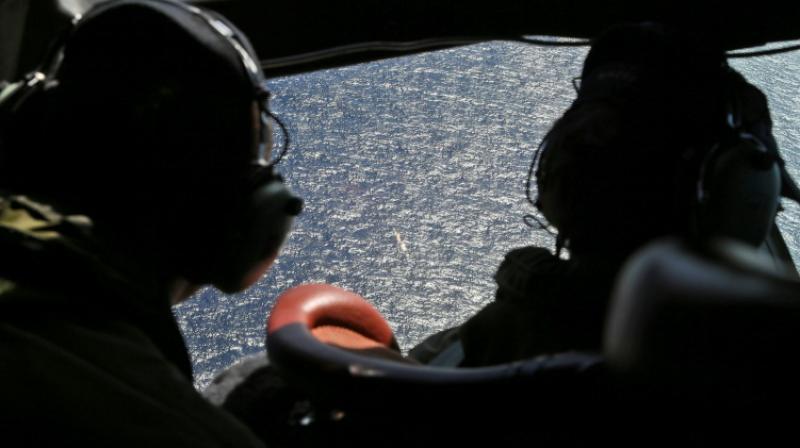 More than four years after the aircraft vanished on March 8, 2014, investigators have had little luck in finding the wreckage of the plane that vanished with 227 passengers on-board. (Photo: AFP)

The aircraft has not been recovered, and the cause of the disappearance remains unknown.

Discovery of two huge structures on the bottom of the Indian Ocean this week  had some hoping Malaysia Airlines flight MH370 had finally been found.

But more than four years after the aircraft vanished on March 8, 2014, investigators have had little luck in finding the wreckage of the plane that vanished with 227 passengers on-board.

Found it on Google Earth: Australian engineer Peter McMahon claimed in mid-March he'd found what appeared to be a plane wreckage on Google Earth, in the MH370 search area.

After spending years combing an online map of the Indian Ocean, the amateur crash investigator claimed to have found a plan wreckage 'riddled with bullet holes'.

Sitting just off the coast of Round Island, north of Mauritius, in an area of ocean that has not been previously searched, McMahon claimed investigators were refusing to dive in the area because they want to 'hide' crucial information.

MH370 stolen: Prior to the plane's disappearance, Captain Zaharie Shah had listed the small island of Diego Garcia - 4700km northwest of Australia - on his flight simulator.

Theorists suggested that Capt Shah may have been practicing landing the plane on the island's airstrip, which is controlled by Britain but is home to a US naval base.

Suggestions have also been made that the plane may have been stolen by terrorists and hidden in North Pakistan, or even by North Korean dictator Kim Jong un.

Cyber hackers takeover: In the wake of September 11, new technology was designed allowing planes to be controlled remotely in the event of a hijacking.

British author Norman Davies claims Boeing's 'Honeywell Un-interruptible Autopilot on board computer' - which was featured on MH370 - could have been hacked and the plane flown to a secret location.

'There are reports that the cargo detailed in the manifest didn't add up,' he told The Sunday Times.

In his book Beneath Another Sky: A Global Journey into History, Davis suggested one hacker could have 'kidnapped' the plane before another controlled it remotely.

Pilot suicide: Some have claimed that one of the pilots may have deliberately crashed the aircraft in a well-planned suicide.

According to this theory, captain Zaharie Ahmad Shah deliberately chose to plunge the plane into an area of the ocean up to 25,000 feet deep, where it would be almost impossible to find.

Former Australian prime minister Tony Abbott is among those to support this theory, saying in the lead up to the third anniversary of the plane's disappearance he found it 'plausible'.

Already found: Earlier in 2018,  a search vessel involved in searching for MH370 disappeared for just under three days after turning off its tracking system, sparking conspiracy theories.

After more than 80 hours undetected, the vessel suddenly reappeared on the radar.

Keen followers of the mystery have suggested that during this time the search boats may have been involved in a cover up, after coming across the wreckage.

Mid air emergency:  According to pilot Chris Goodfellow, a serious possibility is that an emergency - such as a fire - left the pilots unable to land the plane.

Writing on his Google Plus account, Goodfellow claimed that in the event of a fire or other incident, pilots would have attempted to make it to their closest runway - a 13,000-foot strip on the Malaysian island of Pulau Langkawi - but never made it.

Mystery passenger hijacked it: The official manifest of MH370 listed 239 people as missing. But amateur investigator Andre Milne says the flight actually had 226 passengers (of which four did not board) and 12 crew - totaling 238 people.

He suggests that an unidentified passenger may have gained control of the plane and flown it to a secret location.

A Malaysia Airlines spokesman said a discrepancy on the 'load sheet' hours prior to the plan taking off had occurred, with the actual number onboard 227 people - a dozen less than initially listed.

Ocean Infinity, an American technology company, are the current search crew who have explored 1,300 square kilometres per day since January, hoping to find the plane.

The Australian, Malaysian and Chinese governments called off the search in January 2017, almost three-years after MH370 disappeared.