20-year-old R.V. Czimkhy from Kallayam in Thiruvananthapuram is crazy about bike races and have been winning prizes for the same. 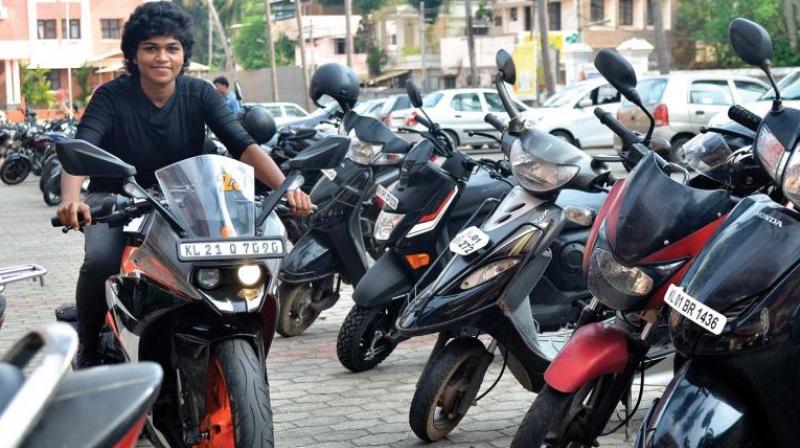 Czimkhy on her favourite mount.

The men laugh. They tease. Czimkhy laugh with them, tell them to stop as one by one, they bring out her newly-won trophies, and another fetches a certificate. She blushes as she smiles, and tries to tell her story in the fewest of words. You know the newest from what’s written on the trophies and the certificates and from watching the orange-and-black KTM RC 390. She has been racing, and winning prizes for it, this girl from Kallayam, a village near Kudappanakunnu in Thiruvananthapuram.

On the bike she has parked, there is her name and her blood group, O Negative. “That’s needed, for races,” she says. There have been two races so far – The Formula Junior Racing Series and a TVS Selection for Championship. “The first one has finished two rounds and I ended up winning second place and first place. There are two more rounds for it. The second one by TVS chose 16 of us among 100 women for the championship which will have five rounds,” Czimkhy – R.V. Czimkhy in full – manages to say between the many smiles she exchanges with her friends, who have always encouraged her with her motorcycling. She has luckily never faced the kind of opposition women do when they take on a male-dominated field. Perhaps because she is still too young. She is 20, she says, when we ask her if she was old enough to have a license. Czimkhy looks like a child now, but she was on the heavy side before, she says. “Eighty-seven kg. I exercised, dieted and went to the gym to shed all the weight. I am about 60 kg now.”

There are no long stories behind her love for motorbikes and especially for speed. She had, as a child, loved to watch her dad and his friend ride their bikes. “They probably owned the first geared vehicle in Kallayam,” she says. Ramesh Das, her dad, passed away two years ago. Czimkhy now live with her mom and sister, Ginkhy. The unusual names of the sisters come from their grandfather. “He was a headmaster who taught English at school, and these were names of his students,” says the girl of few words, who has just started speaking more. “I am reserved, don’t really talk much, so haven’t made friends in the races and the training courses I have been to,” she says. The courses were at the Apex Racing Academy in Bengaluru where she finished three levels and at the Atomics Motorsports, again at Bengaluru, where she finished two more.

“I saw this Facebook post on racing by the RACIR Academy and I wanted to go,” she says. All her answers are simple like that, one-liners that you then try to expand with more questions. So then Czimkhy goes to her childhood days when as a seventh-grader she rode the electric scooter and later learnt to ride a geared bike from her neighbour Vishnu. “I actually wanted to do bike stunts but they didn’t allow me at home.” By 18 she got her license and her Bullet. There was opposition from some of the relatives but they stopped too when she started coming back with prizes.

Czimkhy also has trouble at her college. She’s doing second year homeopathy but missing classes for her racing meant low attendance. “So I wasn’t allowed to write the exams,” she says.

But not too disappointed. She knows where her life is headed, but she likes to have a degree and both dad and granddad were a little into homeopathy, so she might as well finish it, she says. And returns to her teasing bunch of friends, ready to ride back home, but on these roads, she doesn’t take speed. She believes in safety as much as speed.