What happens in Vegas: Nevada puts pot on the menu

Nevada has yet to finalize the exact number of stores that regulators will approve. 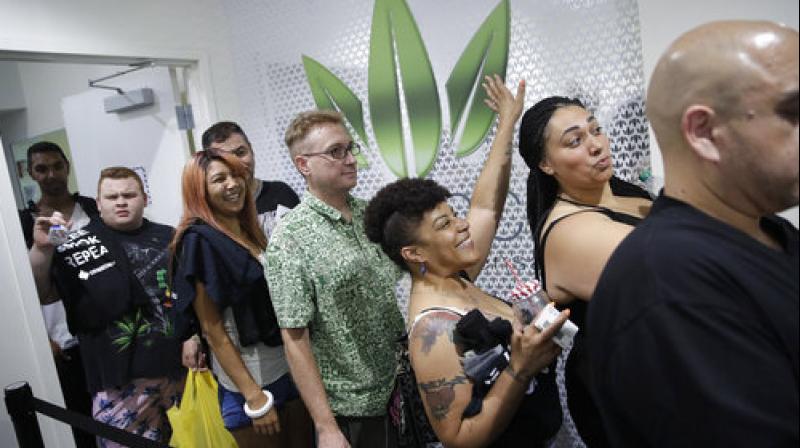 Nevada, the only state where both gambling and prostitution are legal, is adding recreational marijuana to its list of sanctioned indulgences for adults, with sales kicking off at more than dozen shops beginning on Saturday. As result of a legalization measure approved by Nevada voters in November, the state will join four other U.S. states and the District of Columbia in allowing recreational sales.

Authorized marijuana shops will be able to sell up to one ounce (28 grams) for recreational use by customers 21 years and older, said Stephanie Klapstein, a spokeswoman for the state Department of Taxation. Public consumption of marijuana is prohibited, and Nevada has enacted new regulations against edible forms of pot that could appeal to children, such as fruit-shaped candies infused with cannabis. Nevada is also imposing a 10 percent excise tax on pot sales in addition to the regular 4.6 percent state sales tax.

Nevada has yet to finalize the exact number of stores that regulators will approve. Sixty applications were submitted from across the state, according to Klapstein, whose department is overseeing the state's pot market. Only medical cannabis dispensaries, which became legal in the state in 2015, are eligible to apply for licenses for recreational sales.

Many of them are expected to open in Las Vegas, Nevada's largest city and gambling magnet. "Tens of millions of visitors per year from all over the U.S. and around the world will see firsthand that regulating marijuana works," said Mason Tvert, a spokesman for the Marijuana Policy Project, a group that backed the November 2016 ballot measure.

Voters in three other states - California, Maine and Massachusetts - have also approved marijuana legalization. In 2012, Washington and Colorado were the first states to legalize recreational marijuana, followed by Oregon and Alaska. Marijuana remains illegal under federal law. Most U.S. states allow it for medical purposes, but not for recreation.

A U.S. Department of Justice spokesman in an email declined to comment on Nevada's state-sanctioned marijuana sales and added that the department is reviewing its policies on marijuana enforcement. U.S. Attorney General Jeff Sessions has long opposed easing marijuana restrictions. At a speech in March, he described marijuana as "only slightly less awful" than heroin and said the United States needed to discourage drug use.