The $1.1 million prize is shared by Jacques Dubochet, Joachim Frank and Richard Henderson. 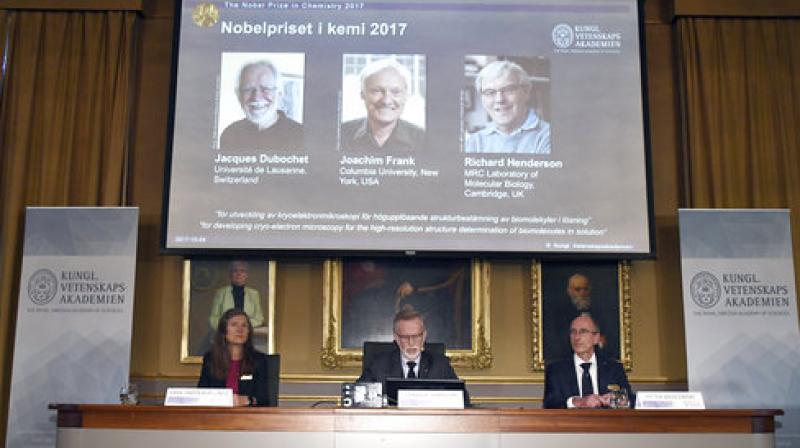 From left, Sara Snogerup Linse, chairman of the Nobel Committee in Chemistry, Goran K. Hansson, secretary of the Royal Academy of Sciences, and Peter Brzezinski, member of the Nobel Committee, sit during a press conference as they announce - Jacques Dubochet - from the University of Lausanne, Switzerland, Joachim Frank from Columbia University, USA and Richard Henderson, from the MRC Laboratory of Molecular Biology, Cambridge, in England as the winners of the 2017 Nobel Prize in Chemistry, at the Royal Academy of Sciences in Stockholm, Wednesday, Oct. 4, 2017.(Photo: AP)

STOCKHOLM: Three researchers based in the U.S., U.K. and Switzerland won the Nobel Prize in Chemistry on Wednesday for developing a way to create detailed images of the molecules that drive life - a technology that the Nobel committee said allowed scientists to visualize molecular processes they had never previously seen.

The 9-million-kronor ($1.1 million) prize is shared by Jacques Dubochet of the University of Lausanne, Joachim Frank at New York's Columbia University and Richard Henderson of MRC Laboratory of Molecular Biology in Cambridge, Britain. The Royal Swedish Academy of Sciences said their method, called cryo-electron microscopy, allows researchers to "freeze biomolecules" mid-movement. The technology "is decisive for both the basic understanding of life's chemistry and for the development of pharmaceuticals," it said.

Frank said he was "fully overwhelmed" on hearing he had won. "I thought the chances of a Nobel Prize were minuscule because there are so many other innovations and discoveries that happen almost every day," he said. "So yes, I was in a way speechless." He said he hasn't yet thought about what to do with the prize money, but added: "I was telling my wife that we don't have to worry about a dog sitter anymore."

Explaining the significance of the technology, Nobel chemistry committee member Heiner Linke said it enables scientists to "see down to the position of individual atoms to be able to see how these molecules interact with one another, what complexes they build, how these complex machineries work."

"It's really the first time that we can see biological molecules in their natural environment and how they actually work together down to the individual atoms," he added. Electron microscopes once were thought to be useful only for examining nonliving material because the electron beam destroys biological material. But cryo-technology - freezing material at extremely low temperatures - protected the examined material from damage.

Frank developed mathematical models to sharpen fuzzy electron microscope images and Henderson, in 1990, was able to generate a 3-D image of a protein at atom-level resolution. Dubrochet's contribution was to freeze the water in the sample being examined so quickly that it vitrified - forming a kind of glass rather than ice, whose crystalline structure diffracted the electron beam.

The annual prize rewards researchers for major advances in studying the infinitesimal bits of material that are the building blocks of life. Recent prizes have gone to scientists who developed molecular "machines" - molecules with controllable motions - and who mapped how cells repair damaged DNA, leading to improved cancer treatments. It's the third Nobel announced this week.