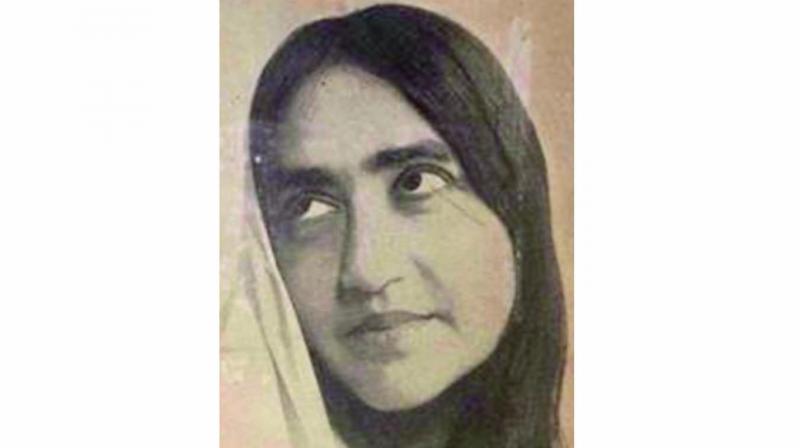 Whether Wajida had an axe to grind against landlords or if her scandalous sagas are true is a matter of perspective.

English translations have made North Indian/Pakistani Urdu writers popular again, but not many today remember the prolific Urdu litterateurs of the Deccan, who have woven into the literary fabric of the city sagas in prose and poetry.

It was during partition that Wajida Tabassum (née Begum) arrived from present-day Maharashtra into the capital of Hyderabad State. Belonging to a lower-middle class family from Amravathi, she spent her formative years in Old City, where she attended Shah Ali Banda High School. Her anthologies  — be it Sheher-e-Mamnu (The Forbidden City) or Uttaran (Cast Offs)-are ridden with explicit descriptions of the carnal desires of Nawabs and their rebellious female servants.

Rahim Khan, a veteran at Urdu Hall-Himayat Nagar, mentions, “During a time where the burqa was prominent, vehicles had curtains to shield women, and the internet didn’t exist, her stories were a means to experience salaciousness.” Mira Nair’s equally risqué film — Kama Sutra: A Tale of Love — is a loose adaptation of Uttaran’s eponymous short story.

Wajida’s short story Ladki Bazaar is the tale of a debauched landlord who divorces his current wives only to marry girls bought from auctions at Shahi Bagh. Thikaana narrates the demise of a haughty servant-abusing Nawab and his once-pampered daughter who turns to prostitution to make ends meet.

Whether Wajida had an axe to grind against landlords or if her scandalous sagas are true is a matter of perspective. But in the prologue of Sheher-e-Mamnu, she recalls the advice of Jeelani Bano, another Badayun-born wordsmith, who advised her to write stories that take place outside the deodhi, the female section of a palace.

Recording a progressiveness of two cities
Jeelani Bano’s book, Aiwan-e-Ghazal, is about an aristocratic family, but she never confined the story to its palatial abode. “The landed gentry in Wajida’s stories peak on the social but not the economic front, whereas in Aiwan they are declining on both,” discerns Oudesh.

Amidst the backdrop of the pre- and post-independent India, no one could have better depicted the contradictions of Hyderabad. Despite its secular culture and the infrastructural/educational contributions of the Nizam, feudal oppression of women and predominantly lower-caste labour was common. Within the nobility and the middle class, there was a progressive element that took to communist movements.

Written in 1976, Aiwan then shows both the feudal and middle stratum slowly accustoming itself with Hyderabad undergoing land-reform. With Old City being the hub of Nawabs and Secunderabad being more of an Anglo and cosmopolitan centre during the Nizam’s days, we see the progressive and rebellious characters bringing the two cities together.

Observing aristocratic philanthropy
Released 11 years after Aiwan, Rafia Manzurulamin’s Alam Panaah instead shows a subset of the Nawabi class, who’ve gotten over their hangovers from the aristocratic days. Aiman, the protagonist from Bangalore whose father was disowned by his family for marrying out of nobility, has Wajida Tabasum-esque views of her people who are from her paternal family’s strata. Initially, Aiman becomes a general assistant in an erstwhile noble family’s mansion called Farmaan. Aiman’s memorable character observes that despite some feudal tendencies, many have shed their medieval ways by gaining education and integrating into an industrial, relatively more egalitarian setup. But lest we forget, Hyderabad has also produced tales that do justice to its history and culture.