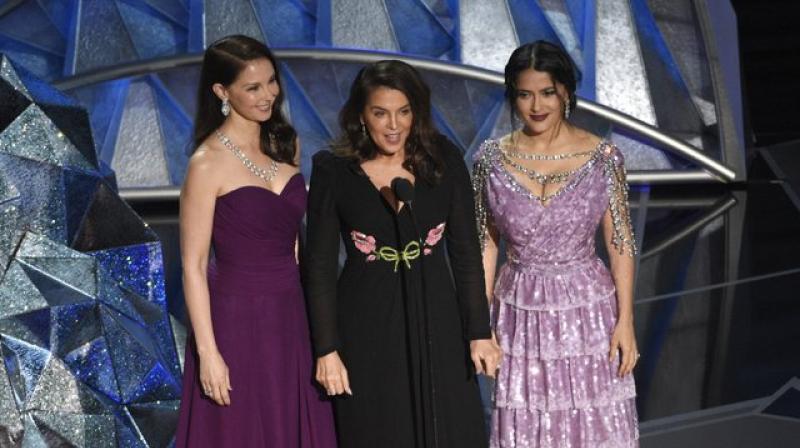 On the red carpet, one of many guests speaking about #MeToo was the founder of the movement, Tarana Burke. (Photo: AP)

There was no #MeToo or Time's Up dress code on the Oscar red carpet. But the topic was, to no one's surprise, a major theme of the evening - from Jimmy Kimmel's monologue, to an emotional appearance by three Harvey Weinstein accusers, to Frances McDormand's calling all female nominees to rise with her in unison.

Kimmel got right to it, addressing both sexual misconduct and the gender pay gap in his opening speech.

"Here's how clueless Hollywood is about women," Kimmel said. "We made a movie called 'What Women Want' and it starred Mel Gibson."

Turning serious, Kimmel said the world was watching - and that Hollywood needed to set an example.

And then he quipped: "If we can stop sexual harassment in the workplace, women will only ever have to deal with harassment all the time, every place else they go."

He also evoked the now-disgraced name of Harvey Weinstein, whose sexual misconduct - revealed late last year - launched the stunning reckoning that quickly spread to other areas of society. For years one of the biggest players at the Oscars, Weinstein has now been thrown out of the academy. Kimmel marveled that the only other person ever kicked out was a character actor who shared screeners.

The most emotional #MeToo moment, though, came courtesy of actresses Ashley Judd, Annabella Sciorra and Salma Hayek, three women who were instrumental in the unfolding Weinstein revelations. They came onstage to introduce a montage that celebrated diversity - of all kinds - in cinematic storytelling.

Said Judd, whose accusations were detailed in the very first New York Times article that broke open the Weinstein story: "The changes that we are witnessing are being driven by the powerful sound of new voices, of different voices, of OUR voices, joining together in a mighty chorus that is finally saying, 'Time's Up!'"

Sciorra, who told The New Yorker magazine that Weinstein had raped her and she'd kept it secret for many years, said: "This year many spoke their truth, and the journey ahead is long. But slowly a new path has emerged."

And Hayek, who wrote a first-person piece in the Times calling Weinstein "my monster too," saluted "those unstoppable spirits who kicked ass and broke through the ... biased perceptions against their gender, race and ethnicity to tell their stories."

A bit later, there was Frances McDormand, setting down her best-actress statuette on the floor so she could exhort all female nominees in the theater to stand up in unison with her.

"Look around, ladies and gentlemen," she said, pointing to them, "because we all have stories to tell and projects that need financing."

On the red carpet, one of many guests speaking about #MeToo was the founder of the movement, Tarana Burke.

"We did the dress code thing, and now we're doing the work," Burke told The Associated Press. "The plan is to continue to do this work to give people resources."

But elsewhere on the carpet, an uncomfortable drama was playing out, as a number of big stars appeared to spurn Ryan Seacrest, the E! red carpet host who has been accused of sexual misconduct - including groping - by a stylist who worked for him. Some stars did speak to him, including nominees Allison Janney, Christopher Plummer and Mary J. Blige, who noted in another interview that Seacrest was "fighting for his identity."

Seacrest has denied the allegations and E! has stood by him. But many on Twitter complained about reports that the network had instituted a 30-second delay to prevent awkward confrontations. (In the end, there were none.) The network said that it was "business as usual. As always, we tape multiple sources of content simultaneously to deliver the best possible show, and there are often brief delays between interviews."

Burke, before the awards, had said Seacrest shouldn't be on the carpet, putting stars in an awkward position. "We shouldn't have to make those choices of, 'Do we or don't we?'" she told Variety.

E! was already under fire at the Golden Globes in January, where actress Eva Longoria used her interview to criticize the network over a pay equity dispute involving former anchor Catt Sadler, who quit after learning she was making much less than her male co-anchor.