Adventure is out there!

Anfy and Anagha are gearing up for a Bullet trip to the Himalayas. 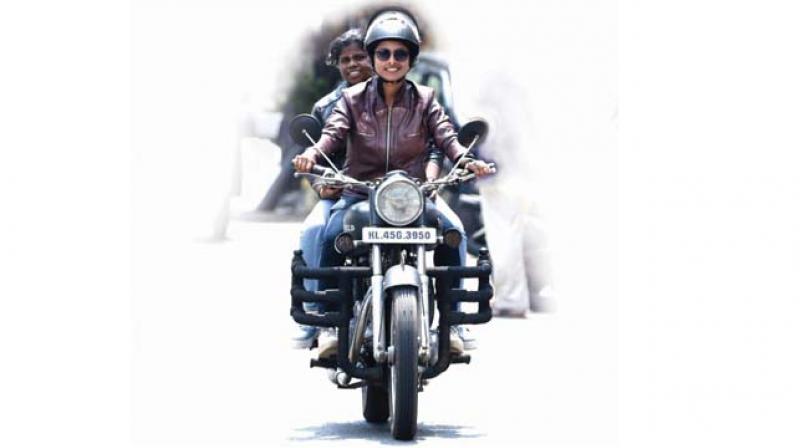 Anfy and Anagha have travelled to Coimbatore on bike.

In their eyes, we see confidence. Eighteen-year-olds Anfy and Anagha, natives of Thrissur, Kerela are sure about their path. They want to ride on their Bullets to the Himalayas. They know the journey wouldn’t be a bed of roses, but want to prove to the world that girls too can chase their dreams. “Everyone is quite supportive,” say the best friends at the press conference held in Ernakulam.

It was not so in the beginning. Like any other parents, Anfy and Anagha’s parents too were anxious. “Because we would be travelling through new places and meeting unfamiliar people. Fears arose when they watched footages of narrow roads in the Himalayas,” says Anfy. “But, we were sure about this and stood for it,” adds Anagha. Now, the parents are in full support, and Mini Baby, mother of Anagha, says, “They should see the world. Only then, they would evolve. They should learn to stand on their feet.”

The duo is planning to kick off the trip on June 19 and complete it in 18 days. The schedule is subject to change according to the weather conditions. “From Chalakudy, we will be travelling to Delhi and will be reaching Jispa crossing Chandigarh and Manali. From Jispa, we will travel to Sarchu, Leh, Nubra Valley and reach Pangong Lake. Return is through the same route,” they say. Both have begun practice to cover the 6,000 km. “Every day, we ride 250 km. As Anagha is short, it is a tad difficult for her to balance. She manages that wearing high heels. So, special training is given to her for that,” says Anfy. Quiz Anagaha about its risk, pat comes the reply, “I know it is dangerous, but nothing can pull me back from my passion.”

The thread that binds Anfy and Anagha is their love for automobiles. “Though we moved to different institutions after Class X, our passion kept us united,” adds Anagha.

Anfy and Anagha have travelled to Coimbatore on bike. “We have also gone to Vagamon and Attappady. The trip to Attappady was to meet family of Madhu, the tribal youth who was beaten to death, and help them. The Vagamon trip has really been a learning lesson,” says Anfy, who has a 99 standard 350 Bullet, which her father bought selling his gold chain.

For the trip, they will be riding on Royal Enfield Classic 350 Bullet. “We will rent them,” says Anfy. Why do they love Bullet? “Because riding Bullet boosts our confidence and makes us bold. We had to deal with a lot of negative comments and pranks from men while riding other bikes. But things have changed after we started riding Bullet. Pranks paved way to respect,” they say. That is perhaps one reason why they have taken ‘security of women’ as the ride’s theme. They need `5 lakh for the trip. “We are looking for sponsors,” they say and believe the universe will conspire for that too.