This year's host is India and the official theme is ‘Beating plastic pollution.’ 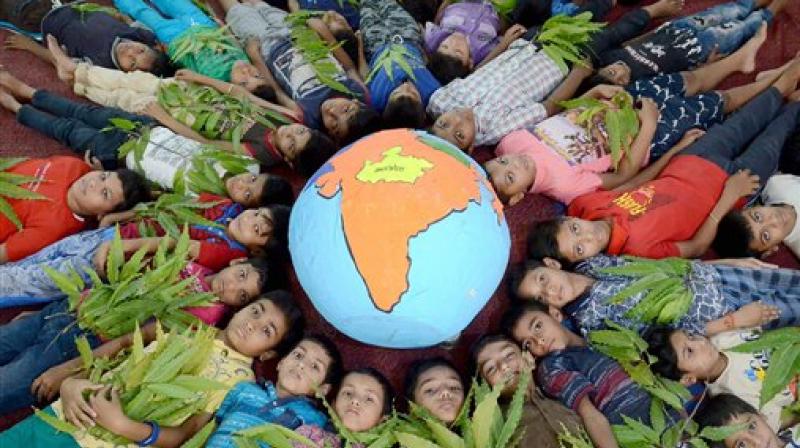 First held in 1974, it has been a flagship campaign for raising awareness on emerging environmental issues from marine pollution, human overpopulation, and global warming, to sustainable consumption and wildlife crime. (Photo: PTI)

Celebrated on June 5 every year, World Environment Day is the United Nation's principal vehicle for encouraging awareness and action for the protection of the flaura and fauna. First held in 1974, it has been a flagship campaign for raising awareness on emerging environmental issues from marine pollution, human overpopulation, and global warming, to sustainable consumption and wildlife crime.

Every World Environment Day has a different global host country, where the official celebrations take place. The focus on the host country helps highlight the environmental challenges it faces, and supports the effort to address them. This year's host is India. The official theme is ‘Beating plastic pollution.’

Here’s how Indians have taken to Twitter to spread the message:

Prime Minister Narendra Modi took to Twitter to wish the people and spread the message of environment conservation.

Greetings on #WorldEnvironmentDay. Together, let us ensure that our future generations live in a clean and green planet, in harmony with nature. pic.twitter.com/HYUNlCCQ2P

The Vice President of India too pushed for plastic ban on the micro-blogging site. He wrote,

*Nature, Culture for Better future*
Let us take a pledge to ‘Beat Plastic Pollution’,  the theme of World Environment Day today.  Time has come for every individual to join the campaign to end single-use plastic and protect the environment. #WorldEnvironmentDay pic.twitter.com/uwpmP2cMR1

The President of India reaffirmed the country's commitment towards a cleaner and more sustainable planet.

On World Environment Day, we reaffirm our commitment to a cleaner and sustainable planet. India is hosting the global celebrations this year. And we are obligated to bequeathing a greener and eco-friendly legacy to our children #PresidentKovind

I think instead of #WorldEnvironmentDay let’s rename it as #WorldSurvivalDay. May be then we’ll realise we are on the brink of our carelessness & greed-infused disasters. Just look at water crisis in Shimla.

Speaking to news agency ANI, Sadhguru Jaggi Vasudev said, "This has been a concern for me and many other people including United Nations. It's just that now there is a concrete action in the direction. Plastic is a classic case of, whatever is given to us, we know how to make a problem out of it."

Cricketer Rohit Sharma stressed on the fact that environment protection should not remain a one-day affair, but something that people look into everyday.

Let’s not make ‘looking after our environment’ an event which comes few times a year. Let’s make it a part of our daily routine. Something we pass on to the next generation #ThereIsNoPlanetB #WorldEnvironmentDay⁠ ⁠

The Congress too took to Twitter, pledging to protect the Environment.

The Earth doesn't belong to us but, we belong to the Earth.
On #WorldEnvironmentDay let us take a pledge to protect and preserve the environment in every possible way. pic.twitter.com/Uodv341pOV

The Information and Technology Minister of India, Ravi Shankar Prasad too was not behind in promoting environment conservation.

On #WorldEnvironmentDay, let us raise awareness among the people for a cleaner and greener environment that can lead us to sustainable development. pic.twitter.com/8mPtUjPggl