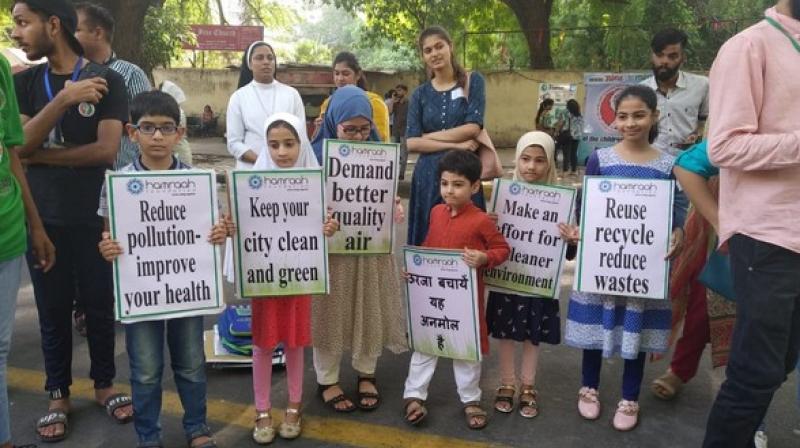 Around 250 children participated in an event called 'Climategiri'. It was a non-violent protest to make people aware of the dire situation that the earth is in today. (Photo: ANI)

On Tuesday, a crowd of children braved the sweltering heat of Delhi, a striking result of climate change, and gathered at Jantar Mantar to draw attention to the pressing environmental problems that are slowly and steadily inflicting irreversible damage to the planet.

Inspired by Greta Thunberg, a 16-year-old teenage climate activist from Sweden, who initiated the global movement of student climate strikes, around 250 children participated in an event called 'Climategiri'. It was a non-violent protest to make people aware of the dire situation that the earth is in today.

The children used creative mediums of expression to draw people's attention towards the cause. They performed circus art, flash mob, nukkad natak (street plays), beatboxing, skits and solo guitar performance to raise their concern about the ailing planet they have inherited from the generation before them. A planet, which is overwhelmed with pollution and almost drained of all its energy resources.

"The event turned into a colourful festival dedicated towards asking for change," said Brother Steve Rocha, the National Convener of Nine is Mine campaign, under which the event was organised.

'Don't waste fossil fuels, don't be fossil fools', 'Planet nahi toh future nahi', and 'We are missing our lesson, so we can teach you one!' were some of the slogans printed on placards that the children held in their hands hoping that one of them would force people to think about the greatest threat that haunts humankind today, Global warming. Standing under the sun, for a cause they believe in, each one of these young environmentalists had their own little solutions and opinions about the issue in hand.

Vishal, a 17-year-old protestor demanded that there should be a change in vocabulary while talking about climate change. He urged people to use more sensitive and expressive terms like 'Climate Justice', 'Climate Emergency' and 'Climate Crisis'.

Meanwhile, understanding how an unregulated use of plastic continues to choke the planet that she calls home, 10-year-old Anjali demanded a ban on one-time use of plastics.

"We will be organising 'Climategiri' every month leading up to November where we aim to gather 1000s children on the streets of Jantar Mantar demanding Climate Action and Protection of our future," asserted Manisha Jeevan, the Minister for Climate Justice of the YASH Child Parliament.

This was the third edition of 'Climategiri' organised by children themselves, along with schools, child-rights organisations, youth volunteer groups, and environmental societies.

Rapidly rising temperature, frequent droughts in various parts of the world, severe tropical storms and alarmingly melting glaciers and sea ice, all of these indicate that the unfettered and careless human actions over the last several years have managed to suffocate the planet that we live in.

According to the United Nations (UN), the last four years were the hottest on record, and winter temperatures in the Arctic have risen by 3 degrees celcius since 1990.

As a result of this, sea levels are rising, coral reefs are dying, and human beings are starting to see the life-threatening impact of climate change on health, through pollution, heat waves and food security. It is time for damage control. And that is exactly what these children stand for- a healthier planet.