A trip on bus no. 135 from Fisherman's Wharf in the east to Nepean Sea Road on the west. 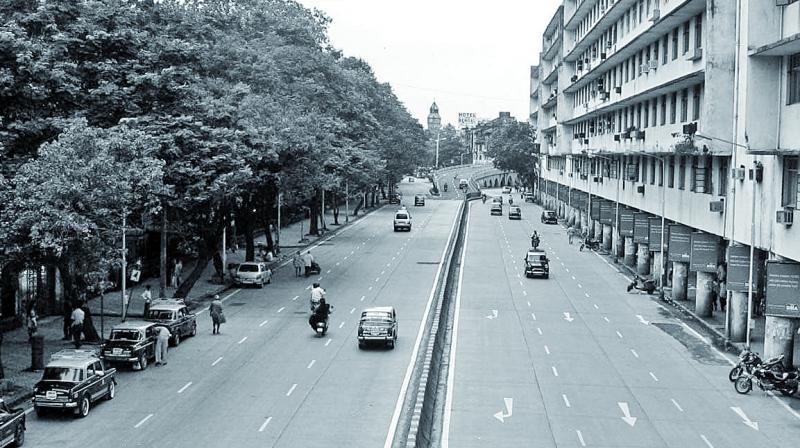 At 5 pm, the fish market at Bhaucha Dhakka is deserted, but the stench of the morning’s catch lingers. (Photo: Ninad Chaudhari)

“Machchi aisi cheez hai, kisi ke haath mein aati hai, kisi ke haath mein nahin,” the fisherman declaims. At 5 pm, the fish market at Bhaucha Dhakka is deserted, but the stench of the morning’s catch lingers. Boats home from sea prance in the foaming brine, while skeletal crews lash them to the jetty and one another. They’re too plebeian for the sleek New Dock, visible behind the ruined fortifications of Cross Island.

The mango-carton man, ubiquitous all over a summering city, is here too, fresh off the ferry from Alibaug. He and I are the only people waiting for bus number 135: from Fisherman’s Wharf to Nepean Sea Road, from the east coast of the city to the west.

The bus arrives at what must be the only stop beyond a Customs checkpoint, and I grab a window seat. As we lurch into motion, I gawk at the high walls and barbed wire that shield Victoria and Indira Docks. At Mallet Bunder, we swerve to avoid trailer trucks careening around the corner in some motocross fantasy.

Near Nakhwa (boat-owner) Road, I spot the tracks of a disused shunt line from the century-old Mumbai Port Trust (MPT) Railway. In its heyday, it ferried cargo, passengers, and even troops during World War II. A signboard from 2008 at Nirman Bhavan lists “fair wages” for dockworkers; unskilled: `144/day, skilled: `155/day, hours: 8 am to 6 pm. Hundreds of identical hatchbacks await mobilisation in the pre-shipment storage area of Frere Basin. Every building in this silent, treed precinct is reminiscent of Ballard Estate and belongs to MPT, the city’s largest landowner.

We lumber past Mazagon Docks, where secretive navy engineers build warships, and turn onto Nawab Tank Road, named after a relative of Tipu Sultan who lived nearby. The docks, their dedicated railway, a station named Dockyard, the Central Railway Goods Yard, and an arterial road named after dockworkers’ union leader Placid D’Mello, form a museum district of our maritime history. It’s seldom on your way to anywhere; you must want to come here.

The 135 passes between the two arms of the Freeway, through a guard of honour comprising parked school buses of Fazlani L’Académie. At Wadi Bunder, the eyes are pleased by a green arbour in the courtyard of Jaffer Sulemani Musafirkhana. Built by a Kutchi Memon in remembrance of his brother, it provides subsidised lodging to pilgrims embarking on Haj.

Over a bridge and the Central Railway, into another land. The Dongri of my childhood was synonymous with gang violence; today, it is just a busy transport hub. The Market building seems transplanted from a latter-day small town, but the Art Deco balconies projecting into the numbered streets of Naoroji Hill suggest a more tasteful past. The hill, once crowned by Dongri Fort, was levelled, like many others in the city.

We pass a row of mesh-walled attics in which tailors spin into the dimming light. Noor Baug, once an open ground and wedding venue, is now Mufaddal Shopping Arcade, many of whose shutters are downed. A red-pink structure that appears to be a diwan-e-aam is actually Umerkhadi’s Holy Cross Church. Here begins the vast campus of JJ Hospital, its Gothic OPD building visible behind walls that say “please don’t piss here”. In true capitalistic spirit, a string of pharmacies faces a pavement settled by indigent patients’ families, their belongings strung on nails.

At long last, Maulana Shaukat Ali of the freedom struggle’s Khilafat Movement meets his brother Mohammed Ali via roads bearing their names at a chowk named after Allama Iqbal, who derided their cause. This is Bhendi Bazaar and bedlam. Princess Building, watches over an intersection manned by defeated traffic cops. They wear mouth masks; I hope they have earplugs too. Traffic is static, horns are blaring and it’s hard to believe that this locality gave birth to an eponymous musical gharaana whose most famous student is Lata Mangeshkar.

Heritage enthusiasts would rejoice in this community’s architectural motifs: filigreed balconies and two sets of shutters for each window. Evening walkers could confirm the tabloid headline: “spot the last tree left in all of Bhendi Bazaar”. Casual passers-by might notice the blind couple begging with a chaadarbetween them, as well as the men squatting outside Madina Sharif Hotel, devouring rice mixed with chunks of meat. Before Café Paradise (“NO BEEF”), someone would look down a teeming lane and glimpse Raudat Tahera, mausoleum of Syednas.

Instead, we tend to take the JJ flyover, which renders all this invisible. We deign to come here and gorge during Ramzan, though we bypass its presence for the rest of the year. As bus number 135 heads west, I think to myself: we profess our undying love for this city but visit only those parts that fit into our narrow narratives. To love something – rich and poor, beastly and beautiful – we must first acknowledge that it exists. All of it.