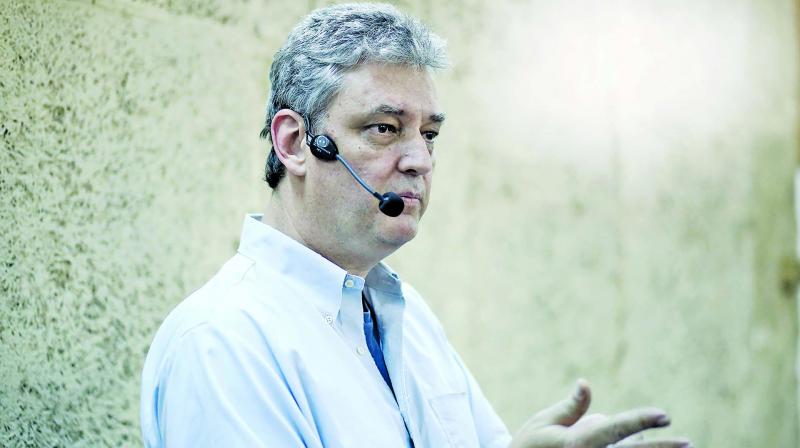 The rush of daily life does not leave us with enough spare time to step out of familiar environment and engage with people outside our network. At least one person has diligently tried for nearly 12 years to create space for individuals to come out and tell their stories while encouraging everyone to listen to others and tell their stories too. He is Eric Miller of the World storytelling institute who is hoping listeners will learn how to handle a situation by taking cues from the stories.

Eric, who has been conducting storytelling workshops for the last 12 years, sees a lot of potential in this new form of communication, which is also an alternate therapy to drama, art and music therapy, in Chennai and India at large. “In Chennai there are 45 storytelling trainers and most of them attended my workshop. And these storytelling sessions in cafes, anybody can come and share their stories, even if they have never attended my workshops”, says the man behind Chennai Storytelling Festival which happens in February every year.

The storytelling has a purpose. It gives the students an idea of how to go about a situation and the inspiration comes from children books, movies to even the great Indian epics. “Stories are treated as models from our past and of our future. So when we tell a story, we are basically presenting a model. It can be a negative model just as much as it can be a positive one. Students tell stories from their personal experiences or an incident where they have seen the consequences. Like if you do this, the result will be like this,” say Eric.

He goes on to explain, “The participants will either compose a situation in the presence of their trainer or just take a real-life incident and analyse the situation. If it is a fictitious situation, it is in the hands of the participant to decide how the characters, varying from a lion to a princess, will go about it and then the consequences. If it’s from a real-life incident, the participant already knows what happened in the end. The idea is to share the situation with others and tell them what happens in the end so people can take a cue from those stories.”, asserts Eric.

He believes the positive stories also become integral to the healing process which a person goes through while receiving psychological counselling. The healing takes place at a much faster pace.

Talking about this concept of telling stories in cafes, Eric points out it is not a new concept.

“Our mothers, grandmothers used to tell us stories. It is embedded in the ancient Indian culture. Even we share stories from our day-to-day lives with people surrounding us, which these storytelling sessions aim to take to a wider audience. Since it takes place in cafes, the number of storytellers hovers around 10”.

Eric shares how he draws the story situation and inspiration from Panchatantra or the great Indian epics - the Ramayana and the Mahabharata. “In Ramayana, when Ram was building the bridge to Sri Lanka, there was an army of monkeys led by Hanuman who helped with the construction of the bridge. And there was a squirrel which was also doing its bit by carrying small pebbles with its small mouth from the sea to the site. When all the other monkeys were making fun of it, it was Ram who made them realise that every contribution, big or small, counts.”

The storytelling workshops are open to teachers, professionals and most importantly to children, who get this inculcated in them right from a tender age to share ideas and provide inspiration. “Life skills, communication skills, soft skills are also imparted when the trainers deal with working professionals,” Eric says even as he shares another interesting course he has been taking  for the last 30 years to make the storytelling sessions even more intriguing. He himself did it once and since then has been encouraging others and making them soak in real-time communication, stepping out of the books.

“To make them understand the Epic of the Anklet even better, we take them to the places along the coast and then Kerala border where they get to interact with fishermen, farmers and people from the tribal community in the hilly areas exactly like the character in the book did” says Eric who himself travelled along the same route some 30 years ago. He believes this new way of storytelling is picking up in Chennai with 45 professionals in city at the moment and over 130 nationwide.