Every climb up a mountain is an exercise in spiritual growth. 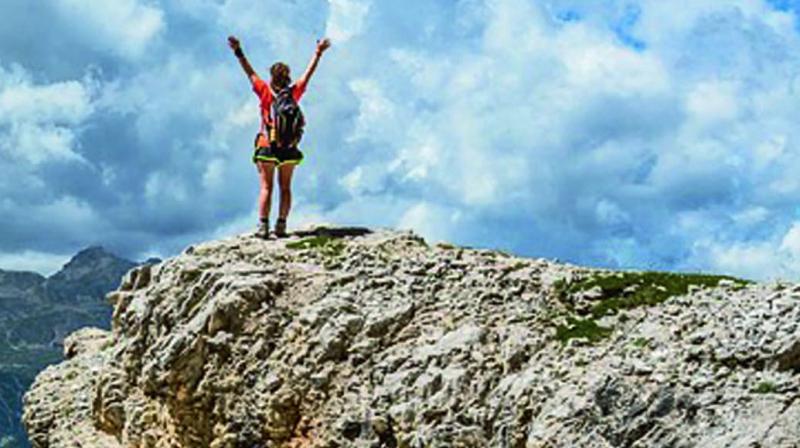 Eternally exposed to the elements yet ever enduring, mountains teach us what equanimity in the face of adverse conditions is all about.

There is something about mountains that is awe inspiring. Lofty, towering above the plains, they are majestic and awesome and literally form a stairway to heaven and act as the gateway to the Gods. Eternally exposed to the elements and the vagaries of the weather, yet ever enduring, mountains seem to teach us what equanimity in the face of adverse conditions is all about. Every climb up a mountain is an exercise in spiritual growth. As we leave behind the dross and the mundane and scale the peak in search of another dimension, the mountain doubles as a metaphor for life. The imposing mountain and the peak may be in sight at all times but it has to be climbed one step at a time with persistence, tenacity and a never-say-die spirit. No wonder the Chandogya Upanishad tells us that it is not always a human being that has to be one’s spiritual guru and that one can learn from nature and one’s own intellect.

Several mountains around the world are considered sacred. Mount Kailash, the abode of Lord Shiva, is of special significance to Hindus, Buddhists, Jains and native Tibetans. Pilgrims circumambulate the mountain and one circuit is believed to cleanse the sins of a lifetime (remember it is also the source for four rivers including the Ganges) while a 108 circuits are said to confer enlightenment. Mount Kailash is never climbed for it is considered sacrilege to step on it. Likewise Mount Fuji is believed to be the incarnation of the Earth spirit and home to Goddess Sengen Sema.

Recently I visited the Phnom Kulen mountain in Cambodia where there are a thousand Shiv lingas floating in a river — a sight to behold amid the waterfalls and lush green vegetation when the river is not dry. With their beauty, silence, pristine air and sheer location, mountains are the ideal spots for meditation, reflection and contemplation. Small wonder therefore that sages retreated to mountain caves for precisely this purpose.

In Christianity and Islam too mountains hold a special place by virtue of their being the site of revelations and miracles. Mount Tabor was where Jesus was revealed to be the son of God while Mohammed is said to have received his first revelation on Mount Hira. As for mountains being witness to  miracles, Mount Carmel was where  a little cloud rose, grew and replenished the land with  copious rain after a prolonged drought and when Abraham was about to sacrifice his son on Mount Moriah a ram was providentially substituted by divine intervention.

Several people worship mountain spirits to ask for blessings, protection for the dead buried there or for the boon of fertility. Rituals such as fire festivals, spiritual healing and other ceremonies are held atop mountain peaks.

Whenever we city folk and town dwellers are worn down in body, mind and spirit, it is perhaps worth the effort to turn to mountains for inspiration and rejuvenation and a fresh perspective on life.

The writer is a spiritual and tarot card reader