The play Bombay Sketches takes you through the various phases of Mumbai’s history, culture, and resilience. 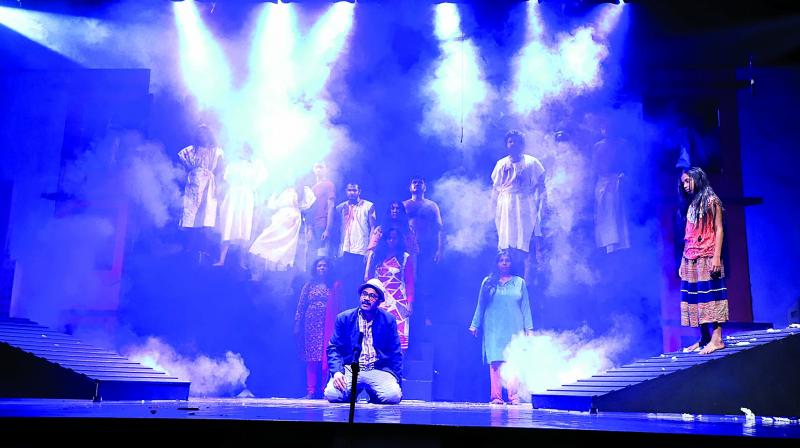 A still from the play

Floods, terror attacks and even stampedes — the Maximum City has been through and  taken away a lot from the people but, but none of it seems to deter its zeal. Noting this chaos that absorbs different cultures, writer Ramachandran K has penned an illustrious narration of the city trying to capture Mumbai’s strengths, weakness, festivals and political indifferences in his play Bombay Sketches.

Having moved to the city in the 90s and closely witnessing the 1993 bomb blasts and riots painted a courageous image of the city for the writer. At the same time making him see the socio-contemporary history behind every facet of Mumbai’s culture.

“Ganpati is not just a pooja as far as Mumbai is concerned; there is a huge history. First, it was absolutely a private affair, but when Bal Gangadhar Tilak made an intervention, it became a freedom fighter Ganpati. There was underworld don Varadarajan Mudaliar, and the Ganpati of Matunga was one of his powerful points. The story says that on the last day he used to throw currency among the crowd. And as far as corporate Ganpati is concerned, Lalbaug makes 17 crores in a fortnight. So a simple Ganpati won’t tell you the story, it has got many layers,” he explains.

It is events like this, and that one of the dance bar girls being uprooted of their livelihood that compelled the writer to bring them together in a play. “The drama is about the uprooted lives all over the city. Even migrations for that matter, of people who are forced to move to the city to earn a livelihood, or the shutting of mills that left two and a half workers jobless,” adds Ramachandran.

Through this play, the writer and play director KS Prasanth Narayanan aim to push people to look into the current scenario and compel them to see how history is represented. However, the directed believes that every city entails chaos, and that behind every high rise building and flyovers are displaced refugees, which he was sure to incorporate into the scenography. “We have set up the big city, and in front are placed, small people. The play is making interventions by talking about differences created through politics,” the director explains.

To not miss anything, the director took a trip to Dharavi and made sure to incorporate the real stories behind the households he saw. “When I direct, I try to find the psychology behind everything; its politics and people too. With Dharavi, I tried to read the pain behind their displacement,” he muses.

And to take the audience through this staged Mumbai darshan will be actor PR Sanjai, essaying the role of a guide, always in a dilemma. “I am the connector rather than a narrator. He is narrating the play to the audience and trying to tell the story of Mumbai, of how Kamathipura came, why there were bar dancers, why the displaced people came and so on. There is a story behind every lane in Mumbai,” he shares.

The job of the guide, according to Sanjai, is to strike a balance between trying to adapt to the changing world and reality. Narrating incidents of Dalits, tribals, and devadasis while trying to connect the past and the present, the actor says, “The guide is facing a fight within, a dilemma as to whom to believe: The gone world or the disturbing world he sees in front of him.”

But what fascinated Ramachandran is Mumbai’s virtue —political and humanistic— that won’t separate the people. “I took the last train during the ’93 blasts and it was full of people. It is not that they have forgotten or are not sacred, but they won’t let it hamper their will and zest for life. Similarly, on the third day after the Taj attack, people were back to normal, singing bhajans on their way back home in the local. Terrorists will fail here because they can’t destroy Mumbaikars’ courage. This healing capacity is great and gives them a strange way of running for life,” concludes the writer.