Hyderabad rowers made the country proud with their maiden victory at the Asian Rowing Masters Regatta 2019. 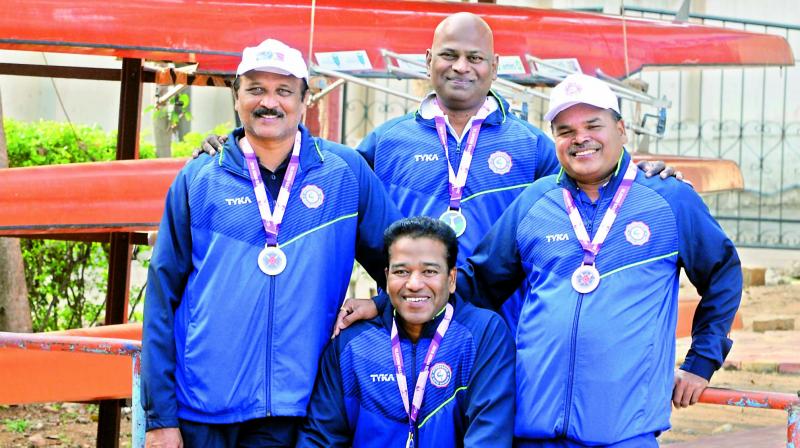 At an age when most people start mulling over their retirement options, four men from Hyderabad chose to work on improving their skills in their new-found love-rowing.

The championship had another medal going to Indians too. A two-member team represented by Satyakanth (46) and Dr. S. A.H. Adil (53) won bronze in the Double Scull category.

But we spoke to the members of the rowing quartet, which, incidentally, is the first-ever team of Masters that not only represented Hyderabad and Telangana on a global platform, but also won the coveted championship, with over 700 elite rowers in the Masters 4-sweep category.

Catching a wave
Fun fact: None of these men are either professionals or athletes. They were merely drawn to the sport as they escorted their kids to practise.

Reflecting on their triumph, Thomas Govathoti, an alumnus of IIM-Bengaluru and a senior investment banker, states that initially they wanted to just enjoy the rowing experience at the international level. But during their practise session, they realised that they have the potential to compete at the highest level. So they practised extensively to get their rhythms and timings right.

“The win only proves that you don’t need to be a professional to achieve something on a global platform. All you need is determination and willingness to succeed; anything is possible then,” asserts Thomas.

Putting their oars in
Understanding their potential, the team approached the national rowing coach and Dronacharya Awardee Ismail Baig and revealed their interest in the sport. Ismail then suggested that they participate in the Masters category, which is for men above 47 years (average).

Baskaran Arunachala Reddy, owner of an IT company, remembers the challenges of their practice. “We used to wake up at 4 am and practise for three hours before heading off to work every day for two months before the championship,” he says.

Adding that Ismail was instrumental in transforming the team, Baskaran says, “He helped us correct our rowing techniques and lateral movements, and ensured we don’t repeat common mistakes, etc.”

Of course, given their age, the team was initially anxious to practise.

“Rowing was totally new to us, so we had our apprehensions,” says Baskaran with a smile.

“But after we found our rhythm and started practicing in sync, we began dreaming of representing our country at an international stage one day. So, to have eventually ended up winning gold, we couldn’t ask for more!”

Rowing in more waters
For Siva Kishore Kosaraju, owner of an SME company, getting familiar with the rules and aligning the boat in accordance with the wind speed during the competition was the biggest challenge.

Talking about how the team suffered a few mishaps while practising and the difficulties they had to during the championship, Kishore recollects, “We practised in the Hussain Sagar Lake, where the water is still, but during the championship, we had to compete in a reservoir, which had flowing water. Also, the wind speed was high because of which keeping the boat still was very difficult. But our camaraderie helped us rise to the occasion.” Gadi Chandrasekhar Reddy, an industrialist by profession, is just thrilled their achievement is inspiring others.

“Our friends were shell shocked!” he says with a chuckle. “Now even they want to take up rowing.” The quartet has already begun prepping for their next challenge — The World Championship in September 2020.