Mumbai based comedian Amit Tandon talks about his Hindi comedy special for Netflix, upcoming tour with Hrithik Roshan, and more. 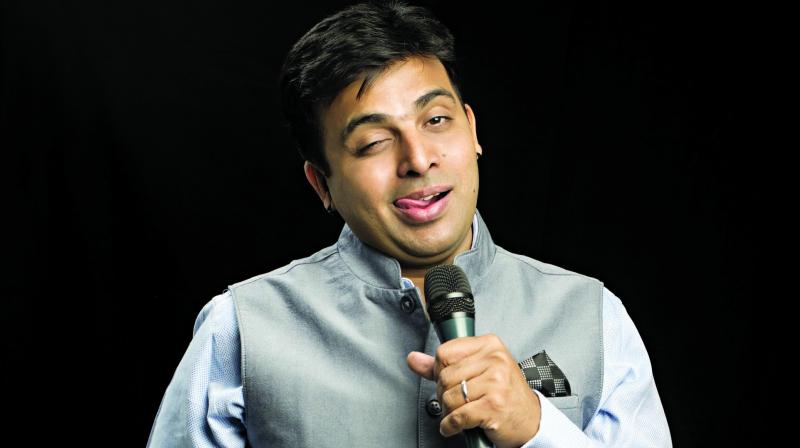 The past few weeks have been surreal for Amit Tandon. As he is the first Indian comedian to host a Netflix original stand-up special Family Tandoncies, in Hindi. His special finds humour in the most mundane things that take place in a middle-class Indian family. “I wanted to ensure that this was different from all the stuff that I have put up on YouTube. It had to be one single story which is stitched together through different sets,” says the city-based commedian, beamingly.

A known name in the comedy circuit, Tandon in his special drifts away from his set format of talking on one topic before moving on to another. But with this special, the comedian wanted a takeaway for his audience.

“I wanted it to be more than just comedy. The end leads to some conclusion and it is not just a sudden end,” says the management professional turned comedian.

Speaking about his choice of language, the comedian reveals that he was clear about this audience and hence didn’t hesitate doing the show in Hindi. “I was very sure that I wanted the show in Hindi as that is the language I speak at home; it is a language that I connect with the most. Rather than trying to reach out to everyone and not connecting with people, I just wanted to reach out to a certain number of people that I can connect to,” says the 44-year-old, adding, “There is a huge number of Indians across the world. In the US alone, there are around seven million Indians who watch Netflix, which is probably larger than the number of people watching in India.”

The special — now consistently floating at number three ahead of some Bollywood movies and international content — has garnered responses from all over the world, leaving Tandon overwhelmed. “It took me 10 years to reach here. Within 24 hours of its release, it was number seven in India and now it is consistently going at number three. This is fantastic. I never thought that I would be on one of the best OTT platforms in the world doing my special,” he smiles. “I didn’t have a big following on Instagram but now there are new followers every day sending direct messages. Some people watched it thrice. The response has just been awesome,” he adds with a laugh.

Now, once the songs of praise settle down, Tandon will travel around the country with his live solo show in Canada, Australia, and Europe over the next few months. He will also be doing a tour with Hrithik Roshan in the United States along with singer KK and actress Gauhar Khan.

“My next solo is ready in terms of content and everything. With Hrithik, the tour is a mix and I bring comedy to the table. I will be holding conversations with him and bring my dash of humour,” reveals the comedian, who will also be soon seen in a TV series that he is tight-lipped about. “I am also doing the Netflix Comedy Festival. In addition to that, I am working on a lot of non-stand up comedy projects and a podcast too,” he reveals.

When it comes to his influences, Tandon has studied Jerry Seinfeld intently and is amazed by Bill Burr and Ali Wong’s on-stage energy. “I don’t draw my inspiration from any specific comedian. Seeing their shows, listening to them and observing them helps a lot, but in the end, it is my story,” he concludes.