Wood returned to work five months after birth and recovery of his son and that's when the harassment started, he says. 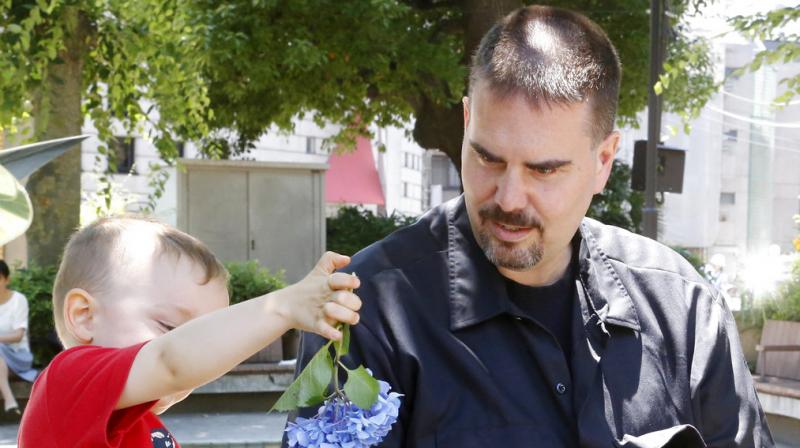 Glen Wood, a Canadian who has lived in Japan for 30 years, plays with his son at a Tokyo park. Wood is fighting a courtroom battle in Japan over what he alleges is paternity harassment. He says major brokerage Mitsubishi UFJ Morgan Stanley demoted him and then dismissed him after he took time off to be with his prematurely born newborn son. (Photo: AP)

Tokyo: Brokerage manager Glen Wood was still negotiating with his bosses to take three or four weeks of paternity leave when his son was born six weeks premature.

Wood, 48, a Canadian who has lived in Japan for 30 years, thought he wasn't asking too much of Mitsubishi UFJ Morgan Stanley, just a small part of what the law guarantees: up to 12 months of paid maternity or paternity leave and your job back.

Japan's parental leave system is relatively generous by international standards - at least, on paper. Prime Minister Shinzo Abe has championed such policies, saying they're needed to prevent the country's shrinking population from freefalling by better balancing work and family life.

But practice often diverges from principle in Japan Inc., where loyalty to the company nearly always comes before family and taking time off can be a liability.

According to the labor ministry, only 3 percent of eligible men - compared with more than 80 percent of working women - take advantage of Japan's parental leave system, which does not differentiate between men and women when it comes to childbirth and child-care leave.

Wood's bosses were extremely reluctant to let him take time off, but after a few days of haggling, he decided he simply had to go.

The baby was in intensive care at a hospital in Nepal, where his partner was working and had given birth.

"It was a time of real panic," he recalled.

Wood returned to work five months later, in March 2016, after his son recovered and could be safely brought to Japan.

That's when the harassment started, he says.

Wood was chided for not showing up at meetings he had not been invited to. His job assignment was changed against his will. Wood was told to take a DNA test to prove he was really the boy's father. He did that.

Three times, he was ordered to take psychiatric tests administered by two company-appointed doctors. Both gave him a clean bill of health and recommended he be allowed to return to work, according to Wood.

Wood sued the brokerage in February in Tokyo District Court, seeking his original job back and back pay, including bonuses, which he was denied after October 2017. He was officially dismissed earlier this year.

A ruling is likely to take more than a year.

Mitsubishi UFJ Morgan Stanley said in a statement it responded "with sincerity" to Wood's paternity leave requests. It denied any harassment occurred and declined comment on specifics of the lawsuit.

Generally few Japanese are willing to fight unfair treatment in court out of fear of being considered a troublemaker in this harmony-loving nation, where litigation can be expensive and fruitless. Most lawsuits that are filed are about maternity harassment rather than paternity harassment, making Wood's case highly unusual, said his lawyer, Yoshitatsu Imaizumi.

"The law guarantees the right, but the thinking that prevails is that men should just work," said Imaizumi. "That kind of old-fashioned thinking is deeply rooted."

There are no criminal penalties for companies that don't comply with maternity or paternity leave standards. The most the government will do is put a company on a "blacklist." And taking time off for childbirth is not as culturally accepted in Japan as in Europe, where it is commonplace, or even in the U.S., where there is no federally mandated parental leave system. Some states and many companies provide such benefits.

Kaori Sasaki, chief executive of ewoman Inc., a consultant for companies on gender diversity, says harassment training is on the rise at Japanese companies, but dramatic improvement results only if people's basic consciousness changes, not merely by putting such systems in place.

"To take a positive note, one can say things are better - compared to 30 years ago," she said. "But to be negative, one can also say things haven't changed all that much. Progress has been subtle, I'd say."

Women complain they are often pressured to quit when they become pregnant. Expectations for men taking time off for new parenthood are so low that having a man take even one day off is considered an achievement for a Japanese company, Sasaki said.

A government campaign to encourage men to take time off, dubbed "ikumen," in a reference to the Japanese word "ikuji" or "child rearing," so far remains more a slogan than a reality in Japan, which placed 114th out of 144 economies in the World Economic Forum's latest global gender equality rankings. Taking into account disparities in income and occupational opportunity, education, health care, political empowerment and other sociological factors, Japan had the worst standing among the Group of Seven major economies.

Companies should realize that they are hurting their own performance, morale, team work and brand image with outdated management practices, said Wood, making his son giggle with delight during a recent outing to a Tokyo park.

"They need to catch up with global standards very quickly, and they need to change," said Wood. "What they did is wrong."