Despite frequent setbacks, there is no denying the TGs are inching their way up on the social and economic ladder. 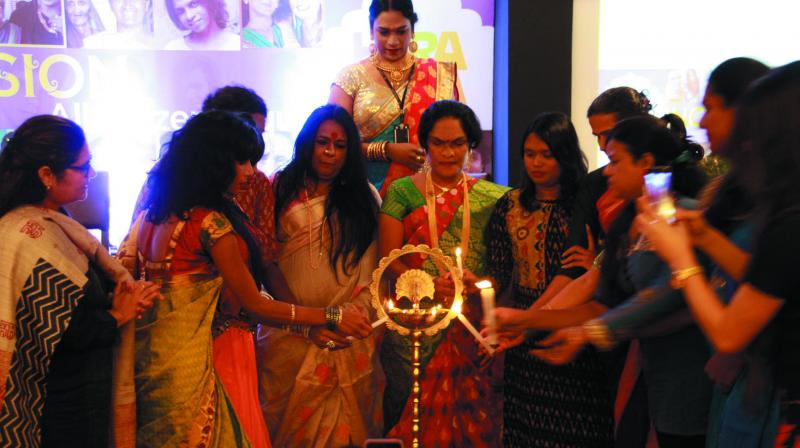 Gauri Sawant with two other participants lighting the lamp at the transgender convention which was held on September 22.

The last one year has seen significant strides made by the transgender (TG) community in getting employment and recognition in a world where they desperately seek inclusion and equity. At the Lakme Fashion Week in Mumbai early this year, Anjali Lama became the first transgender model to sashay down a cat walk in India. Then in April came the news of K. Prithika Yashini becoming the first TG sub-inspector of police in Chennai; in July, Joyita Mondal Mahi, 29, became West Bengal’s first TG judge of a Lok Adalat and in May, Kochi Metro Rail Ltd employed 23 TGs.

It is another matter that eight of them dropped out because they could not find suitable accommodation on the monthly wages of Rs 9,000 to Rs 15,000. In fact, there was reluctance among landlords to give them accommodation and they faced other discrimination.

Despite frequent setbacks, there is no denying the TGs are inching their way up on the social and economic ladder. The energy and the dynamism of the transgender community could be seen in Delhi recently when 200 of them from all corners of the country, along with stakeholders, the government, UNAIDS, representative of NACO, lawyers and media came together for the National Hijra Habba (TG amalgamation) consultation not just on altering public perception but seeking operationalisation of the Transgender Persons (Protection of Rights) Bill 2016, approved by the Union Cabinet. The consultation was organised by the India HIV/AIDS Alliance and anchored by TGs Simran Shaikh and Abhina Aher.  In the evening they took over a Saket mall to mingle with visitors, host a fashion show, music band, participate in discussions and seek celebrity endorsements.

In 2014, for the first time, based on the India Census, five million acknowledged their transgender status. Activists, however, says their number may be far higher. Over 66 per cent of them live in rural areas. The census data also revealed the low literacy level in the community, just 46 per cent, compared to 74 per cent in the general population. Though culturally there is acceptance of the third sex, there is limited knowledge and understanding of same sex orientation and people whose gender identity and expression are incongruent with their biological sex. The result is they face a variety of social security issues and are evicted or run away from their homes.

The India Alliance, which organised the Delhi meeting, has been working for rights of people vulnerable to HIV and other related issues and puts TGs at the heart of its work. It has been implementing long-term projects supporting the health and social rights of TGs. A major challenge continues to be their acceptance by their families. It’s a tough call for the TGs, first they have to come to terms with their own sexual orientation, then find acceptance in the family and finally in society.

A TG from Manipur, working with an international cosmetic firm in Bengaluru, said the majority of the company’s employees were TGs and gays earning anything from Rs 30,000 to Rs 70,000 a month. To get employment, a Class 10 certificate was needed, but employees with a flair at doing makeup, received further training and were sent out by the company to handle make up at fashion shows, Bollywood shows and international film festivals. The cosmetic company had 250 openings across the country and preferred TGs. IT companies are also opening doors to TGs in Bengaluru. In Mumbai, Godrej opened its doors to the TGs though not many were employed.

At a group discussion on “breaking the ceiling, how to increase access of TGs to rights already available”, a TG leader from Mumbai said when young people approached them for admission to colleges to improve their prospects, the TG group meets the principal and most often is able to secure admission. However, in one case the principal called the group leader and pointed out that the new entrant was creating problems by wearing short, skimpy dresses and sticking out like a sore thumb. The young person was adamant that “her” dress sense should not be curtailed. The group had to counsel the young person to abide by the college dress code for greater acceptance.

Gauri Sawant from Mumbai, one of the petitioners for National Legal Services Authority (NALSA) for the Transgender Bill, was a very vocal participant at the Hijra Habba meeting. Wearing salwar kameez and with the short hair like a halo around her head, she looked very different from the sari-clad person participating in Kaun Banega Crorepati, aired the same evening on Sony TV. Gauri, with popular singer Usha Uthup beside her, made Rs 25 lakhs on the programme for the home she wants to build for HIV/AIDS orphans. The little girl that she has adopted is also an orphan whose mother died of the infection. With Amitabh Bachchan and Usha Uthup endorsing the struggles of Gauri and other transgender, it was truly a sunshine moment for the community.

However, discussions around the Standing Committee Report on the Transgender Bill showed lack of clarity on understanding and implementing their rights. According to the bill, TGs will be given a TG certificate that would enable them to access their rights. The person seeking the certificate has to apply to the district magistrate who will then constitute a screening committee of the CMO, district social welfare officer, a psychologist and a representative of the TG community. In Tamil Nadu, TG certificates are being given since 2009. In Chhattisgarh, however, the status of the TG is determined by the affidavit provided by them.

After getting the certificate, should a TG undergo sex reassignment surgery (SRS) there has to be a fresh application to the district magistrate for a revised certificate as male or female. It is only after getting this certificate that the first name can be changed in the birth certificate and all other official documents relating to the identity of the person, including passport. In Mumbai after counselling by the TG community, the TG certificate is acquired. Then they move ahead for SRS. The process is not as easy as it sounds and may take a whole year. Then there is another long, painful period for sex change and reapplication for certificate as male or female. In Kolkata, a participant said it was not possible to get the certificate after SRS. Getting the names changed on the PAN and Aadhaar cards is even more difficult.

A representative from Tamil Nadu said on the basis of the TG certificate, 254 were able to get homes. There are several other benefits, including a pension of Rs 5,000 a month.  Another person pointed out that senior TGs who may be 80 to 100 years have been left out of the bill. They needed ashrams and old-age facilities. The government was keen to pass the bill in the Winter Session so it was important to make the necessary changes soon.

Based on group discussions, it was recommended that the bill should include setting up of TG Welfare Board; the nodal person and department for TG in each state should be determined by the Central government; representatives to the Welfare Board should include all TG identities mentioned by NALSA. The group that looked at “Advocacy and Stakeholder” said the guru-chela tradition of the hijras should continue; since the bill does not reflect all the concerns of TG, it wanted a representative in Parliament who would listen to their concerns and include them in the bill; technical help of lawyers, activists and experts was sought for issues like property rights of TGs and their right to adopt children. The Advocacy Cell was given the responsibility of lobbying with local MLAs, MPs and chief ministers for smooth passage of the bill and subsequently for implementing the act; advocating with SALSA, DALSA and district magistrates. Events like Hijra Habba and others organised by Infosem, National Pride, Rainbow Pride
Walk should be held annually with the participation of all stakeholders, NGOs, CBOs, social welfare ministers and celebrities. Also recommended was the setting up of a commission for TGs.

Ashok Sajwan, director of parliamentary affairs, assured that 80 per cent of the TG concerns had been addressed in the Standing Committee Report on the bill. He also expressed support for a commission but one with more power and teeth. The transgender certificates, he said, could be revised to include male or female after SRS. Quite clearly TGs are on the right track to getting their rights. The bigger challenge is to change public mindsets.