Tate Modern in London to exhibit visuals on Russian Revolution

The exhibition at the Tate will display an extremely rare poster which proclaims the birth of the Soviet Union. 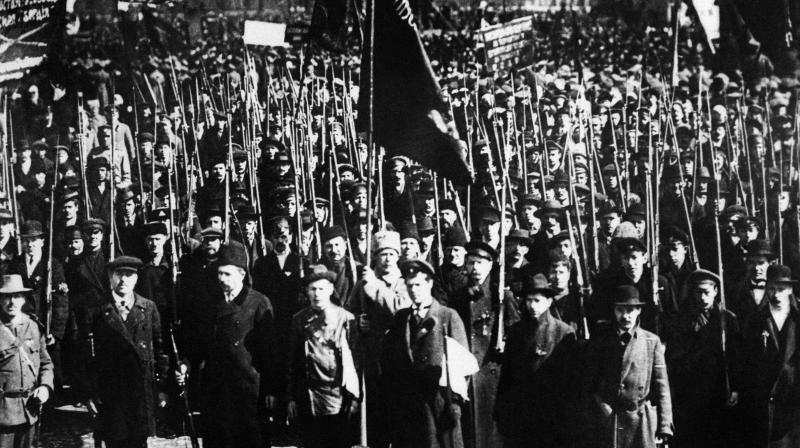 This file photo taken in 1917 shows people demonstrating in Moscow during the period of the Russian revolution. It was the year that ended centuries of royal rule, brought two revolutions, ushered in Soviet domination and changed the course of Russian history irrevocably. A century later, the country seems unsure how to treat the tumultuous events of 1917 that saw it hurtle from the abdication of the last tsar Nicholas II to a Communist dictatorship in a matter of months (Photo: AFP)

The London exhibition "Red Star Over Russia" marks the centenary of the October Revolution.

The visual arts exhibition at the Tate Modern museum in London will display an extremely rare poster from November 1917 which proclaims the birth of the Soviet Union.

The poster is believed to be one of a few hundred that were printed and pasted on the public walls of present Saint Petersburg on November 7, 1917.

The poster is said to be dictated by Vladimir Lenin announcing the overthrow of the post-monarchy interim Russian government.

A visual history of Russia and the Soviet Union, spanning from 1905 up until the death of Stalin in 1953, will be presented through the works of native artists, designers, and photographers.

Rebellion brought hope and heroism -- as well as tragedy, civil war, famine, dictatorship, chaos -- as the Russian Empire became the Soviet Union. With these radical changes came a new visual culture that transformed the approach towards -- and interpretation of -- everyday life. Russian artists reacted against the socio-political and economic constraints imposed by the state authority.

An artistic language developed in contrast with the "official" values of the government. Such work, while often conceptual, also addressed day-to-day Soviet reality.

"Red Star Over Russia" is very much shaped by the writer, photographer, and graphic designer David King (1943-2016). A significant portion of this exhibition, which reveals a momentous period in world history, comes from King's extraordinary collection of over 250,000 Russia-related items.

The Tate purchased both documents from the prominent British collector and the exhibition will feature a selection of Soviet posters, prints, photographs, books, and paintings.

The collection was acquired by the Tate before King's death in 2016.

King's passion for Soviet visual history was an ongoing source of fascination throughout his life, beginning in 1970 when he was working as an art editor at The Sunday Times Magazine.

Sent to Russia to bring back images for a special feature on Leon Trotsky, his initial search expanded to encompass all sorts of Soviet visual culture, from the overthrow of the last Tsar and the revolutionary uprisings of 1917 through to the struggles of the Civil War and Stalin's campaign of terror.

#RedStarOverRussia, a visual history of Russia from 1905 to the death of Stalin, opens 8 November at Tate Modern: https://t.co/kzu7ezyT4n pic.twitter.com/OQkLmrDBWt

Prior to his death, his studio was stocked with Stalinist period lamps, Red Army civil war badges, rare books (including one from Stalin's personal collection with Stalin's own annotations), photography, archival materials, plus paintings by King himself.

Events related to the exhibition include a wine tasting of New World wines inspired by Russia's influential wine figures and a discussion by three contemporary Russian artists (Sasha Pirogova, Mikhail Tolmachev, and Arseny Zhilyaev). The latter trio will revisit the legacy of the Soviet Union and speak about how their work in performance, photography, and installation has directly addressed the Soviet period.