Berlin Wall: The rise, and the artist who lead its fall

Thierry's aim was to paint the Wall so that it looked like a deformity and stood out, not to beautify it. 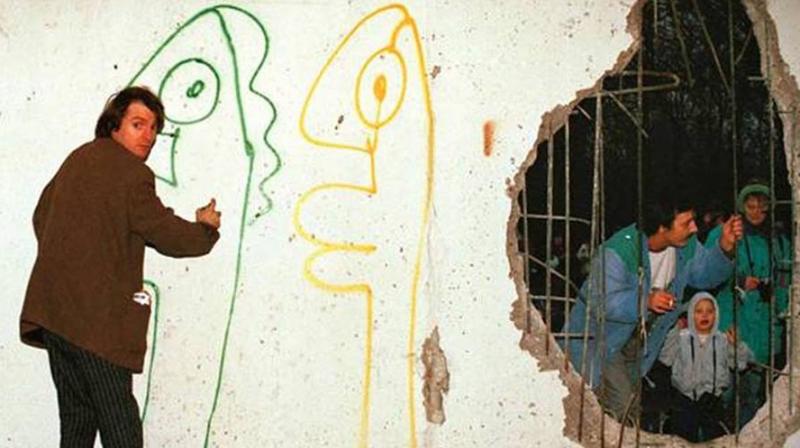 The Berlin Wall has been down, for as long as it was up: 10316 days. (Photo: Facebook/Howard Griffin Gallery)

The Berlin wall, the symbol of divide between East and West Germany has been down for as long as it was standing tall: 10316 days to be precise.

Communist East Germany began erecting the Wall on August 13, 1961, in the process, successfully sealing off West Berlin off from East Berlin and the surrounding East German countryside, thus separating East Berliners from their family, friends and the free world.

According to records, around 5,000 people are estimated to have attempted to escape over the wall, with at least 200 people dying in the process.

So they took to the streets on the night of November 9, 1989, unafraid of guards, taking it down once and for all. Leading to the reunification of Germany on October 3, 1990.

All that remains now, are the ruins of the wall which are partially used as an open-air art gallery, known to be the longest of its kind, in the world.

French artist, Thierry Noir was the first ever to paint the Wall (and he did so for five years), which became a political statement in years to come.

His work is still visible at the East Side Gallery of the Wall.

He went on to add, “From that point on I realised I didn't need to do anything illegal, because nothing would have more impact than painting the Berlin wall.”

Thierry's aim was to paint the Wall so that it looked like a deformity and stood out, not to beautify it.

This is when Thierry developed his painting style -what he calls the 'Fast Form Manifest'- as he was always afraid of getting caught by guards, or German Democratic Republic soldiers.

"I have been often asked: 'are you going to Israel to paint the Jerusalem wall?' I think to myself, I painted the Berlin wall because it was at my doorstep.

"The youth must fight like I fought for the Berlin wall,” says Noir while talking about the Palestinian conflict.

Thierry has been working as an international public and private artist for over three decades.

His artwork, collections and murals are displayed in cities around the world including Los Angeles, Berlin, London, Dubai, New York, Dayton and Washington D.C.

Between May to December of 2016, the prestigious Howard Griffin Gallery displayed a full scale, immersive installation dedicated to the work of Noir called the 'Thierry Noir Museum'.