The iconic jodi becomes the first Indian animated character to get their figures at the famous wax museum. 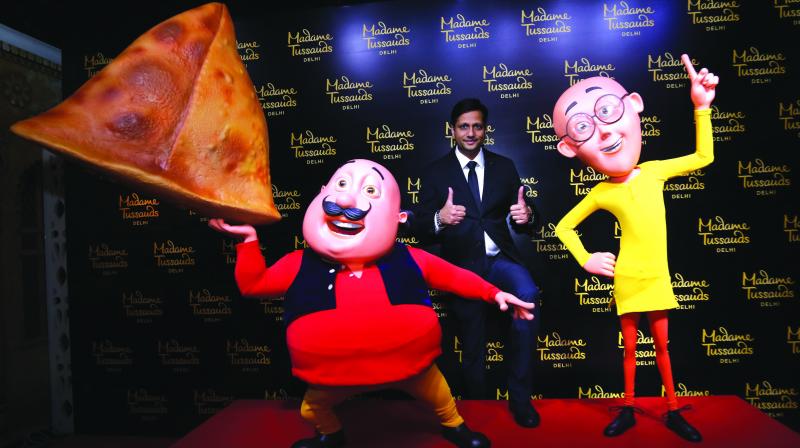 The world famous wax attraction, Madame Tussauds presented figures of Motu and Patlu, the animated cartoon characters at its Delhi attraction. Motu Patlu is currently India's #1 animated television series airing on Nicklodean. These characters originated from the Lotpot Magazine, which was founded by Late Shri A.P. Bajaj and recently the magazine celebrated its fifty years of working. Currently the group is being managed and run by his son P.K. Bajaj and his grandson Aman Bajaj.

The wax statues were unveiled on the fourth June with pomp and show. The whole team of Motu Patlu was present there. “It is a great moment for us, as our most popular creation is being recognized in an internationally acclaimed attraction. We are elated and look forward to kids' reaction while meeting their favourite stars. We are happy to launch a new Motu Patlu comic book today for children.” Spoke P.K. Bajaj, the founder. An excited Anish Mehta CEO, Cosmos-Maya & Producer of the series said, “At Cosmos-Maya we feel privileged to have had the honour to create the show based on the iconic characters Motu and Patlu and that the show has been entertaining kids for years and now it is being featured at Madame Tussauds is the latest in its repertoire of distinguished honours!"

The show Motu Patlu is extremely loved by children and has become popular due to its clean and good quality content. “Through our program we want to inculcate good values in its viewers and because of this reason even the parents and grandparents love our show. The main aim is to make people laugh and writing comedy can be a difficult task.” adds Niraj Vikram, the director of the show. Motu is a plump man who likes to eat samosa , which provides him power and by profession he is a gardener. Whereas Patlu is a slim man and is often portrayed as the smartest guy in the city. The show focuses on how the two have a penchant to land themselves in comical situation, later rescuing themselves only by sheer luck.

On being asked that how these characters created, P.K. Bajaj replied, “Back in 1964 my father and I thought of creating Motu Patlu for the children and created a comic book for them, which has now become popular all around the world. Taking this to another level, launching a full show has not only made me happy but has made my father's dream come true.”

Apart from India, the show is being broadcasted in other countries as well like Nepal, Indonesia, Bangladesh and is being further taken to London and Russia.

The show first time aired in 2011 on the channel Nicklodean. “Earlier I used to outsource my work of animation but I always wanted to do something of my own, create my own content and characters. My children were my biggest motivators and always asked me to create some characters for them. When I got the opportunity of creating Motu Patlu as a television show, I was thrilled”, says      Suhas Kadav, the director. When asked about the challenges that he has faced while working in this industry he candidly replied, “The only drawback that we face in India is that people do not acknowledge our work of animation as animated characters but call them cartoon characters. In the USA, animation is winning Oscars, even we want our work and show to win many accolades in our country.”