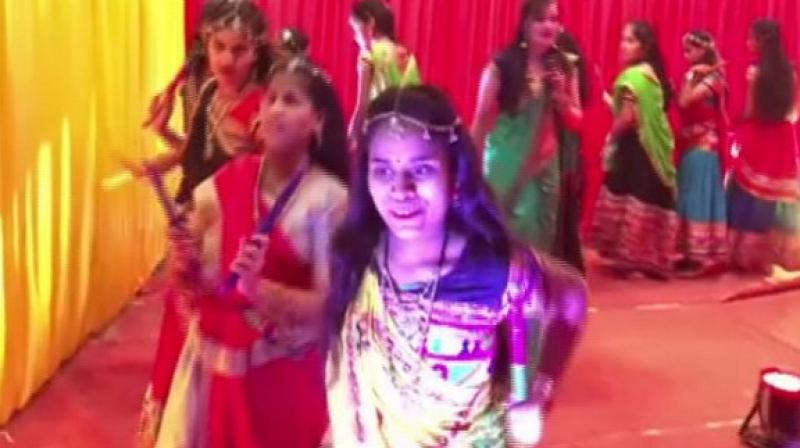 Madhya Pradesh/ Gujarat, India: As Navratri festival is going on and people are celebrating it all over the country, a number of visually impaired girls also picked up Dandiya sticks to play Garba here. Indore's Mahesh Vishal Kalyan Sangh witnessed a sea of people on Sunday night when over hundreds of visually impaired and low-visioned girls rocked the stage with their on-beat and in-sync performance. From Bollywood songs to devotional, these girls enliven the night with their fervour and zeal.

One of the performers, Pooja Kumari explained, "I am performing Garba from the past nine years here and our teacher Miss Dolly teaches us the dance, directions and movements." Describing her teacher's method of teaching them, Pooja told, "She does it on counts, then on the beats of Dhol."

No doubt that Pooja and others like her had to go through a tough time earlier but giving all the credit to her teacher, she added, "Ma’am solved all of them." Not only their talent is restricted to Navratri, but these girls also indulge themselves in singing, playing cricket, among others.

Dolly Joshi, their teacher and Institution's developing officer said, "These girls have been performing since a decade now. Our objective behind this is to connect them to the normal social lives." Talking about the time needed to train, Dolly added, "To play Garba, they had to practice for around forty-five days. Today, they are competent enough to play Garba opposite anyone."

Meanwhile, in the home state of Garba- Gujarat, a group of men and women from the Rajput community adopted a rather unique way as they played using swords in their hands. This year, Navratri is being celebrated in the country from September 29 to October 7. Navratri in Sanskrit means nine nights in which nine forms of Goddess Durga are worshipped.