An exhibition retells the stories of the last generation of people who saw life before and after India’s Independence. 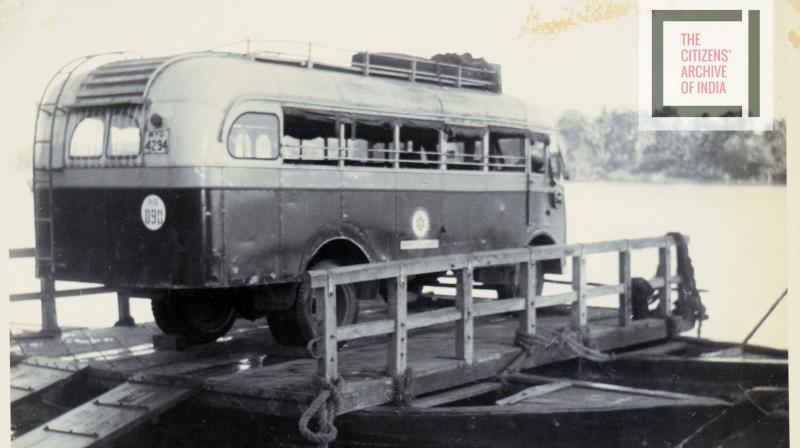 Before bridges were built for the Konkan Railway, vehicles were taken across the river by plopping them over a plank on boats.

When Rohan Parikh lost his grandmother just before his daughter was born, he realised that the new born would never be able to experience all the amazing stories his grandmother told him. And this is what drove him to start Citizens’ Archive of India — a platform focusing on archiving stories of regular people who lead a normal life during the British Raj.

“He realised that this generation is the only generation that has seen life before and after India’s Independence all the way upto today. If he didn’t record their stories, he realized that it would be lost forever,” says Malvika Bhatia, Archival Director, Citizens’ Archive of India.

The organisation’s exhibition, titled Life As They Knew It, aims to bring out interesting stories from the daily lives of people who have lived through the British Raj, Partition, and Independence. Unlike other exhibitions, this one will be presented as a mix of photographs, quotes, and small video clips, letting the audience experience first-hand narrations from real people.

“We know about political history, but we don’t know how the people made it through that time. We know about Gandhi, Nehru and Subash Chandra Bose and there are stories about these people, but from an ordinary person point of view,” says Malvika. The director insists that the history of the layman is equally important as the political one: “We have been collecting stories for two years, and we wanted to exhibit our work because more and more stories started coming in. It’s easier to show people what we do, and we want to show why we want to collect history like this too,” she explains.

Speaking about the kind of stories one can expect, Malvika says, “When you see the exhibition, there are very few political stories and a lot more stories about the life and time that these people grew up in. The way society was, the way they spent their time, about their schools and colleges, how and why they chose their job, etc. It’s also about what love and marriage were like.”

Giving an example of the kind of stories at the exhibition, the director reveals: “There is a lady named Lata Sampat who grew up in a town called Kunta in Karnataka. After her wedding, her husband’s family took them to Jog Falls, and they had to cross a river to reach the waterfall. But the river at that section didn’t have any bridge, and there were some boats with planks of wood across the boat, so the bus had to climb on the planks and then it was taken across the river (see pic). The people were taken across in a separate boat. This kind of story would never be recorded. This shows how infrastructure changed in that part of the country at that point in time.”

Although the movement is based in Mumbai, Malvika and her team have 360 hours of interviews collected from across the nation. Sharing her experience of collecting stories, Malvika is often taken by surprise when she is exposed to memories from small villages that one can’t even locate on the map. “There are people who lived in the smallest of villages — now if you talk about a small village in Maharashtra, it will never make it to the textbook — I’ve never heard of some of these places. The point is the village also has a story, the person also has a story that needs to be told,” she concludes.

The exhibition will take place on November 14 and 15, at Chemould Prescott Road.