Cashing in on Amma?

Jaya was a public personality but a very private person. Will her biopics be able to capture her mystique even if they do make money? 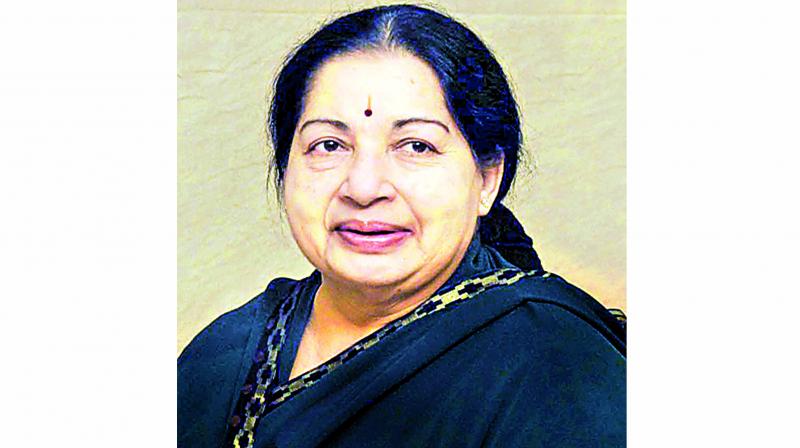 Enigmatic and extremely private J Jayalalithaa or Amma was a lioness who kept her personal life clearly demarcated from her public life. No matter what so-called associates, friends and colleagues share about her, she was a deeply private individual.

With filmmakers cashing in on her life and death, visuals of the first-look of Kangana in I'm Queen where she plays Amma were received with a certain amount of disdain as netizens termed her “plastic” and “animated”. Now, a still of Ramya Krishnan dressed in AIADMK coloured saree for her film Queen directed by Gautham Vasudev Menon is being circulated. While fans and film buffs are in awe of Ramya’s steely gaze and posture, many feel no one can play Jayalalithaa and they ask why should a distorted and “scripted” story with cinematic effects be allowed to define her legacy.

SK Nawaz, Advocate, Madras High Court
Jayalalithaa was a popular leader, not only in Tamil Nadu, but all over India. Films with biopics will spoil her image. She was the best chief Minister when it comes to controlling law & order. Her legacy should not be misinterpreted by cinematic scripts and distorted facts. The directors should drop the idea of making a biopic of Jayalalithaa. Whatever their motive, commercial or political agendas they must exercise caution and care.

Vishal Mehta, CII, Young India
The biopic should come to the limelight. People who don’t know about her will be able to understand and experience the struggles as a woman politician throughout her political career. And of course the look has gotten mixed reactions but when an actress plays Amma there are bound to be comparisons.  Filmmakers are aware of the mixed responses and I am sure they will change the looks as required by the audience. Jayalaithaa will be celebrated more after the movie’s release.

Vinaita, Singer
I am going to be honest. They can make even ten more films about her but it’s definitely not going to reveal the magnificent life of hers. It’s difficult to do that. You got to be biased when it comes to narrating a story of a big leader. Either biased towards or against, but it’s a bias and never fact. We would only get to see traces of the truth but we won’t get to see the real truth and it won’t hold up to what she was in real life.

Padmini Raman, Homemaker
Whatever people write or speak on social media, Jaya is an iconic figure. Her death was very poignant for most of Tamil people and beyond.  She proved herself as a great leader among a male dominant society. People will shower her with more praise if the movie is done well. I think it is good for Jaya as well as the public to know about their legendary leader. The films must be made tastefully keeping in mind the fact that she was a woman who guarded her personal life fiercely and was at all times dignified.

Gouthamraj, Director of Jyothika's Raatchasi
Biopics are always essential; films which depicted the lives of Nelson Mandela and Mary Kom were a huge success. Directing a biopic is definitely good for the industry, it depends on what the filmmakers are up to. Jayalalithaa’s death has a lot of hidden secrets. Aiming to make money out of it won't be encouraged by the public as well as the film fraternity. And that is why there is less reception for the first look posters of both Thalaivi and Queen, despite being directed by renowned filmmakers like AL Vijay and GVM