The publication apologised for their mistake and also came up with a new version of the cover, but the damage was done. 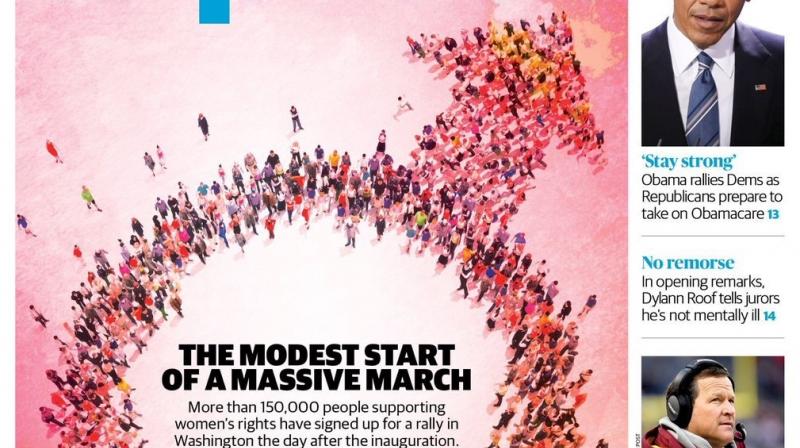 The cover story was about women marching in Washington D.C. (Photo: Twitter)

Washington: In the wake of several shocking incidents like the mass molestation in Bengaluru, the need for strengthening women’s rights has been reiterated. But even as numerous campaigns are underway to ensure gender equality, it seems there is still a long way to go in terms of raising awareness.

While publications like National Geographic are featuring transgender individuals on their cover, another reputed name has landed itself in a soup with a terrible goof up. Washington Post Express carried a cover story about thousands of women planning a protest march in Washington D.C. a day after Donald Trump’s inauguration ceremony, but while it used pink excessively on the cover, it printed the gender symbol for men in the image.

Shout out to The Washington Post Express who accidentally put the MALE symbol for the WOMAN'S march on their cover today pic.twitter.com/xGS0XE8RTd

Such a grave mistake from a well known publication was quickly notice by twitterati who were quick to take Washington Post to task, as users called them out for their sexism and male-centrism.

is this some kind of record for largest typo pic.twitter.com/kOZ9UIp0Ig

I have never seen or heard of the Washington Post "Express" before today so I guess the cover worked.

Listen, everybody makes mistakes. But perhaps this is a sign that @WaPoExpress needs to hire more women in the art dept. ♀ pic.twitter.com/GDHYN5xuy7

Meanwhile Washington post issued an apology for the fumble and also tweeted a corrected version of the cover, but the outrage suggests that the damage has already been done.

We made a mistake on our cover this morning and we’re very embarrassed. We erroneously used a male symbol instead of a female symbol.

This is how the cover should have looked. We apologize for the mistake. pic.twitter.com/MKKOkHPV8T