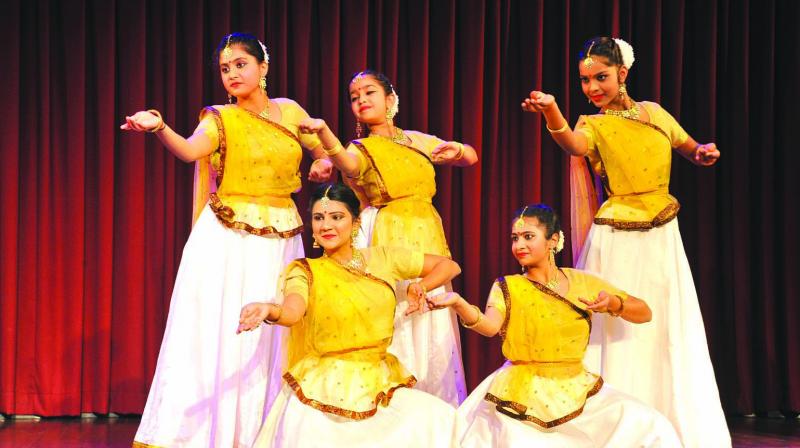 Beside being known for its dynamic yet a great way of story telling, the Indian classical dance forms are also known for its guru-shishya parampara that rests on one simple principle: for a disciple, the guru is the last word on the subject of dance. To celebrate this tradition through budding artists, Kautilya Foundation and Aamad Dance Centre together recently organised Pratibha Vasantotsav in the national capital at Triveni Kala Sangam. The festival also emphasised different moods of Vasantotsav and spread the message of unity ‘Ekta ka Sandesh’.

Nisha Kesari, who left the audience mesmerized with her performance, started with the composition titled Ardhanarishvara, which is an androgynous deity composed of Shiva and his consort Shakti, representing the synthesis of masculine and feminine energies.  The item signifies “totality that lies beyond duality”, that God is beyond the classification of male and female. And ended with the presentation on Surdas’s composition: ‘Shayam Mile Mohe Aise Mai”. It is about a young girl who met Krishna and spends time with him, but when she returns to her home, she makes many stories to her mother for her reason for being late.

Nisha Kesari’s began her formal training since the early age of 7 and was initiated formally into Kathak by her guru - Guru Rani Khanam Ji who is renowned Kathak exponent. “It was a beautiful experience, indeed one of the best experiences of my life. I was equally excited and nervous for this day. It’s very difficult for a dancer to portray a story through expression, movements and rhythm and is very challenging,” shares Kesari.

The evening also presented a composition titled ‘Basant’. The act depicted the shades of spring. When the spring comes, the yellow mustard blooms in every field, the air is filled with a fresh aroma of life after a long winters sleep, the skies are filled with a lot of colours, rainbows freshen the face of the earth. Ridhima Singh, one of the performers of this composition explains, “We took song from one of Amir Khusro’s compositions. We portrayed flowers, nature, birds, songs and joy symbolising the celebration of spring.”Another highlight of the evening was the performance by the Kathak exponent Dr Rekha Mehra who performed Madhurashtakam. A trained classical dancer, Mehra acquired a unique style of her own and has skilfully blended Indian mythology with traditional dance style alongside Jaipur and Lucknow Gharana. “It is a Sanskrit composition in the devotion of Lord Krishna. And was based on composition of the Hindu Bhakti philosopher-poet Sripad Vallabha Acharya,” shares Mehra.

“Kathak has always captivated the attention of different types of people in the audience. A lot of youngsters are coming up to learn this form and keeping the tradition alive. This guru-shishya parampara has taught us a lot will continue to do so, and this is the reason why I believe that there’s a huge scope of this form all over the world,” concludes Nisha Kesari.