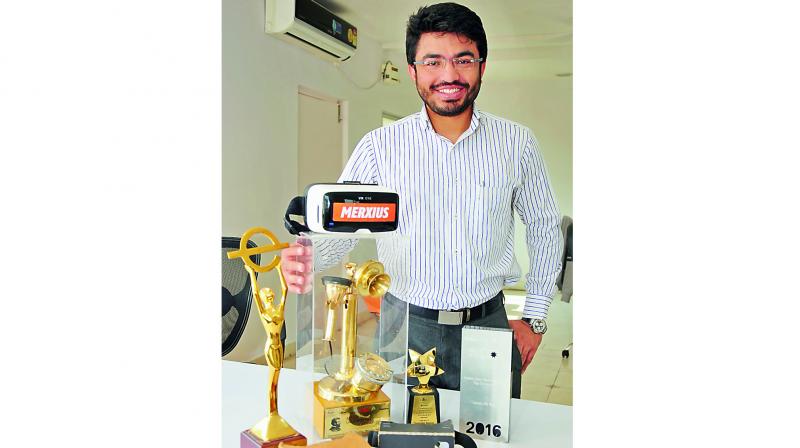 Hasan Ali Khan with his creations

Who doesn’t want to be in a different world far from reality? Hyderabad-based Hasan Ali Khan has managed to give this experience to people just by strapping on a headset, and has duly gotten recognised for it. The co-founder of augmented and virtual reality company, Merxius, is on an award-winning spree. The latest one is from the CIO association of India — ‘Best Chief Technical Officer’ in the start-up category. “This was the first time that the CIO awards added the start-up segment and it feels great to win it,” he says.

Coming from an engineering background, Hasan has always been interested in technology. “The idea of dealing with virtual or augmented reality hit me in 2010 but it wasn’t refined. Our co-founder Vaishali Neotia and I were college buddies who had just come up with a Facebook app for FIFA World Cup. With the response we got, we thought it would be a good idea to take it further,” Hasan shares.

Initially, they didn’t even have an office. “I had just occupied a friend’s room and was operating with only a laptop. We grew one step at a time and soon became the ‘start-up enabler’ — providing everything to make a start-up work.”

“In 2012, when I was at the Golconda Fort with friends, I realised there must be a way to visualise the fort in its former glory. Thus, my journey in virtual and augmented reality began,” he says. His company has created RealSim Editor, or RED, a tool for virtual reality. In simple words, anyone who has a 3D model can import it into this platform and in one click, can get virtual reality (VR) out of it. Last month, they won the Aegis Graham Bell Award for Innovation in Augmented Reality and a nomination by the IET, UK, for being amongst ‘Top 5 companies in the world innovating in IT’, ‘Best Startup Award’ at eINDIA, ‘Top 10 deep tech companies by IBM SmartCamp’ and more. “We were the only company from India to showcase our work at the Augmented Reality Show 2015, London. We’ve been working with partners in diverse sectors like defense, marketing and automobile — to realise the potential of augmented reality.

“We’re hoping to get crowdfunded and soon, we will go to the US with RED,” he says.