Its north pole is dominated by a central cyclone surrounded by eight circumpolar cyclones. 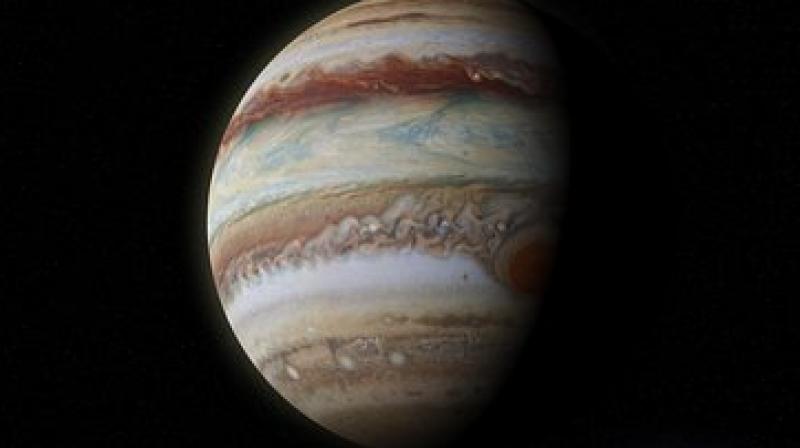 Jupiter's poles are a stark contrast to the more familiar orange and white belts and zones encircling the planet at lower latitudes. (Photo: Pixabay)

Mysterious red and yellow stripes visible on the surface of the gas-giant Jupiter run deep into its atmosphere and last longer than similar processes on Earth, according to data from NASA's Juno mission.

The findings will improve understanding of Jupiter's interior structure, core mass and, eventually, its origin.

The depth to which the roots of Jupiter's famous zones and belts extend has been a mystery for decades. Gravity measurements collected by Juno during its close flybys of the planet have now provided an answer.

"Juno's measurement of Jupiter's gravity field indicates a north-south asymmetry, similar to the asymmetry observed in its zones and belts," said Luciano Iess, from Sapienza University of Rome.

On a gas planet, such an asymmetry can only come from flows deep within the planet; and on Jupiter, the visible eastward and westward jet streams are likewise asymmetric north and south.

The deeper the jets, the more mass they contain, leading to a stronger signal expressed in the gravity field. Thus, the magnitude of the asymmetry in gravity determines how deep the jet streams extend.

"Galileo viewed the stripes on Jupiter more than 400 years ago," said Yohai Kaspi, from the Weizmann Institute of Science in Israel.

"Until now, we only had a superficial understanding of them and have been able to relate these stripes to cloud features along Jupiter's jets," said Kaspi, lead author of the study published in the journal Nature.

"Following the Juno gravity measurements, we know how deep the jets extend and what their structure is beneath the visible clouds. It's like going from a 2D picture to a 3D version in high definition," he said.

The result was a surprise for the Juno science team because it indicated that the weather layer of Jupiter was more massive, extending much deeper than previously expected.

The Jovian weather layer, from its very top to a depth of 3,000 kilometres, contains about one per cent of Jupiter's mass (about 3 Earth masses).

"By contrast, Earth's atmosphere is less than one millionth of the total mass of Earth," said Kaspi.

"The fact that Jupiter has such a massive region rotating in separate east-west bands is definitely a surprise," he said.

Imaging in the infrared part of the spectrum, JIRAM captures images of light emerging from deep inside Jupiter equally well, night or day.

JIRAM probes the weather layer down to 50 to 70 kilometres below Jupiter's cloud tops.

"Prior to Juno we did not know what the weather was like near Jupiter's poles. Now, we have been able to observe the polar weather up-close every two months," said Alberto Adriani, from the Institute for Space Astrophysics and Planetology in Rome.

Jupiter's poles are a stark contrast to the more familiar orange and white belts and zones encircling the planet at lower latitudes.

Its north pole is dominated by a central cyclone surrounded by eight circumpolar cyclones with diameters ranging from 4,000 to 4,600 kilometres across.

Jupiter's south pole also contains a central cyclone, but it is surrounded by five cyclones with diameters ranging from 5,600 to 7,000 kilometres in diameter.