Fostering health for all 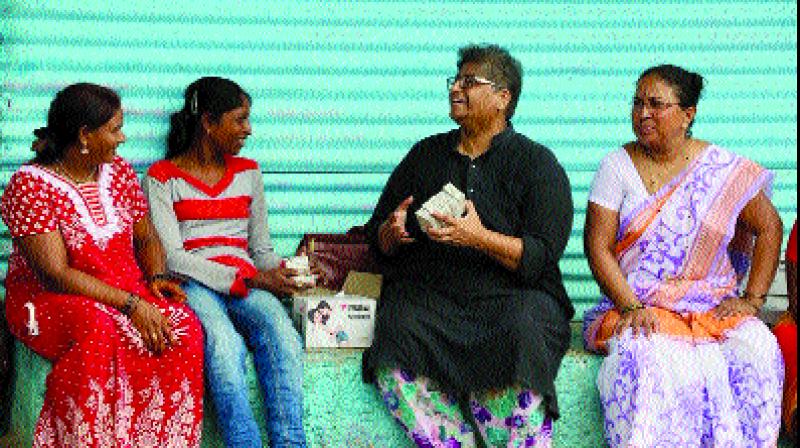 Meena Seshu in the still from the movie From Durban to Tomorrow.

In the historical timeline of public health movements, the International AIDS Conference, 2000, held in Durban, South Africa, was that schismatic event that introduced the discourse of equal access to healthcare, all over the world. Meena Seshu, the founder of SANGRAM, an NGO in Sangli, describes this historic awakening in Dylan Mohan Gray’s new documentary film From Durban to Tomorrow as, “It was the first time we realised that poor people have the right to access medication.” However, 19 years later, the trajectory of this desire to achieve healthcare for all has derailed from its upward path.

In From Durban to Tomorrow that had its preview at Godrej Culture Lab recently, the city-based Indian Canadian filmmaker, Dylan charts the overall despondency in the public healthcare sector caused by the lack of concern for basic human rights. Featuring five health activists from Durban, Madrid, Conarky, Budapest and Sangli, the 40-minute long movie gives one a closer view of the challenges people from different countries face in their fight against HIV/AIDS.

Talking about the downward trajectory of public healthcare systems, Dylan says, “About a decade ago, there were some substantial gains in the field of public health because of the emphasis on having a human rights-based approach; there was a huge amount of momentum created at that time. But in recent years, because of the global backlash against minorities and vulnerable populations, a kind of vitriolic empathy towards right-wing populisms and very anti-minority views has taken root and has led many achievements to fall back. This has created a lot of despondency in the public health community.”

This despair becomes apparent in the film when Vuyiseka Dubula, a Durban-based HIV/AIDS activist, complains that only half of the population suffering from the disease has access to medication. Moreover, the proliferation of cheaper varieties of medicines that are often outdated is resulting in side-effects and development of drug resistance. The apathetic state of healthcare is also highlighted by Péter Sárosi, a Hungarian human rights advocate and activist filmmaker, who reveals how the lack of funds from international donor organisations are resulting in more cases of the disease in IV drug users in Eastern Europe.

Additionally, the film also reveals the social evils that need to be eradicated to control the epidemic in each of these five countries. While Vuyiseka says sexual crimes contribute to the high rates of the epidemic in her country, Mouslihou Diallo, a prominent activist of Guinea puts the blame on poverty. Vanessa Lopez, a Madrid-based public policy activist, accredits corruption for the lack of access to universal healthcare in her country. Conversations with Péter reveal the need for reforming drug laws in eastern European countries to control HIV infections caused by IV drug use. Closer to home, Meena who has been working with the Devadasi community for the last 25 years has been trying to fight social stigmas to control the spread of infection in the said community. Summing up the need to fight the disease on multiple fronts, Dylan says, “Health can’t be viewed in a vacuum, there are so many contributing factors and if you don’t take notice of them and consider just the health aspect alone, it’s destined to fail and that’s the point that comes forward from these people — that you have to take a holistic approach and look at all of the issues that surround health problems.”

While all five activists reveal the ordeals in their own counties, From Durban to Tomorrow attempts to stitch them together to present the bigger, the more dangerous picture posed by the collective apathetic attitude of public health authorities and for-profit pharmaceutical companies. Alluding to this in a segment, Mousllihou remarks how, during the 2014 Ebola outbreak when Guinea was hit hard, the authorities including the Western countries responded strongly and promptly, something that’s been amiss in their fight towards HIV infections. “If they had they not taken on Ebola on a war footing, it would have become a cataclysmic problem. This shows that change is possible if you take things seriously, but that doesn’t happen enough,” says Dylan, whose last movie Fire in the Blood depicted the obstruction of access to low-cost drugs used in the treatment of HIV AIDS by multinational pharmaceuticals company through patent monopolies.

Throughout the course of the film, it becomes apparent that there is a dire need for governments across the world to consider public health to be a part of human rights. “Human rights is very much about equality and universality of access, opportunity, dignity and respect- that’s something has been largely missing in the public health space. If the health policy is dictated by health objectives, the universality and dignity will come along,” Dylan concludes.